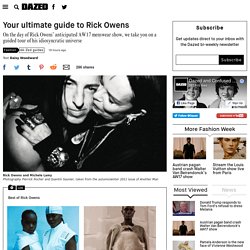 Over the course of his 22-year career, the California-born, Paris-based creative has managed to build an ever-flourishing, multi-million-dollar business out of sheer subversion and shrewd know-how, never once sacrificing his desire for independence or compromising his artistic vision. Every part of Owens’ vast empire is constructed in his own, distinct vernacular – from his personal style, to his inimitable design aesthetic centred on draping, texture and silhouette, to his showstopping runway spectacles. Here, on the day of the designer’s AW17 menswear show, we present the dA-Zed guide to his idiosyncratic universe.

What you need to understand about those ‘human backpacks’ It was inevitable that Rick Owens’ latest show would be met with derision and horror from the ranks of social media and gossip sites. 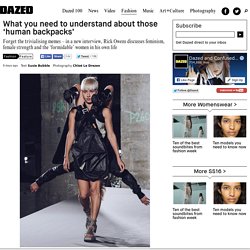 “Human backpacks” is the quickfire summation of the collection, accompanied by a LOL with tears emoji. Make no mistake, this show only proved the power and worth of watching a fashion show in person. If you had been physically there and heard Eska’s voice thundering through Unkle’s arrangement of “This Land is Mine” through the cavernous basement of the Palais de Tokyo, and seen the serenity, grace and power of the way these women carried another, dispersed amongst Owens’ finest air-swooshed silhouettes, you would know that this was no LOL situation.

There was surprise perhaps, because these duos of women, bound together by what Owens called “loving ribons” strode out so suddenly and with such an effortless strength. The overriding sensation that you were left with was of awe for Owens – a man, who is articulating his feelings about women so deftly. Rick Owens ou la force des femmes - Culture / Next. Rick Owens a beaucoup d’humour. 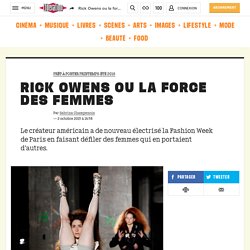 Models wearing models.... Rick Owens SS16. Rick Owens: “I have to contribute beauty to the world” Yesterday, Rick Owens hit the headlines once more with a show that saw models walk with other women harnessed to their bodies, bearing their weight all the way down a labyrinthine runway. 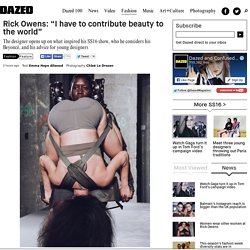 Designed to complement his menswear show, which dealt with themes of masculine aggression, the collection was about the strength of women, transforming trappings of fetishism from ties that hold women down to the ties that bind them together. “Straps can be about restraint but here they are all about support and cradling.

Straps here become loving ribbons,” the designer wrote in his press release. Although he wasn’t around for post-show interviews yesterday, today he headed to the Dazed Tumblr to answer your questions – from the inspiration behind the collection to his favourite movie (The Devils), the artists he considers “his Beyoncé and Rihanna respectively” (Christeene and Divine David Hoyle), and why he likes to shock (“I like to be shocked”). “Happiness is gratitude for what you have.” Two Things: Rick Owens Pays Homage to Leigh Bowery During S/S Fashion Show.

PFW: Rick Owens Spring/Summer 2016. Rick Owens Sends Models Carrying Models Down Spring/Summer 2016 Women's Runway. The models wore human backpacks at rick owens. Via @id_magazine Much like skydiving, walking the runway is intimidating and sometimes it's nice to have a buddy strapped to you. 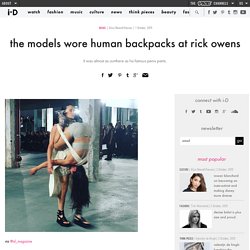 So, caring human and excellent showman that he is, Rick Owens sent his models into his Paris show venue today with pals harnessed to their backs - and sometimes fronts (some of them definitely got a better deal than others) - like knapsacks. "Human backpacks" may sounds like something Stefon promises from a night at Slash, but the setup was just as real - and almost as dramatic - as the glory-hole pants Owens debuted for fall/winter 15. Here are our some of our favorite Instagrams: via @anderschristianmadsen. Women wear other women at Rick Owens. Each Rick Owens show seems to surpass the next. 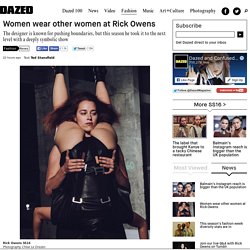 Today at his Paris Fashion Week show, models came down the runway with other women strapped upside-down to their bodies, their limbs hanging limply. These people were tied to their torsos like rucksacks, and along with a group of regular models, were wearing the designer’s monastic SS16 collection. Human backpacks and full-frontal nudity: why Rick Owens is master of the catwalk stunt. How does a cult designer win effusive praise from the world’s snootiest critics and coverage on the front of the Daily Mail website at the same time? 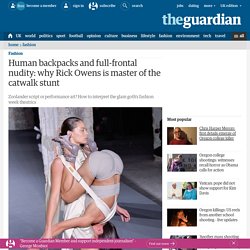 Welcome to the world of fashion’s pre-eminent haute goth, Rick Owens, master of the access-all-areas catwalk stunt. Forget the intricate tulle and embroidery presented by storied fashion houses this week in Paris. Last night, Owens stole the season – again – by sending models down the runway wearing flesh-and-blood accessories, with models carrying each other as human backpacks – or as living knapsacks, swung out to the front in the paranoid tourist position.

It was quite Leigh Bowery and, according to critics in the room, felt “moving,” “disquieting” and “impressive”. It was also “a tribute to female strength” that “suggested the physical labours of pregnancy”. Away from the high-mindedness of the fashion world, the rest of the media has found the show sufficiently ridiculous to cover it extensively with some fairly genius headlines.