The Met’s Rei Kawakubo Show, Dressed for Defiance - NYTimes.com. Every year, the Costume Institute makes a different case for art in fashion and for fashion as art, usually in an immersive context and with impressive results. 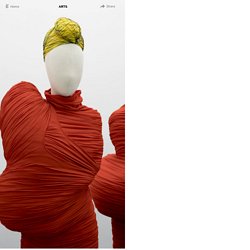 The Kawakubo show takes this argument into radical terrain. It doesn’t focus on art within fashion as did the recent show featuring Charles James’s sinuously sculptural ball gowns, which were functioning garments. Rather, its center is a staggering panoply of mostly quasi-wearable three-dimensional forms that are a kind of hybrid, an art of “the in-between,” driven by Ms. Kawakubo’s insatiable quest for originality, or as she prefers to call it, “newness.” The result is an inspirational show that places Ms. Photo In the institute’s retracing of nearly 40 years of clothes — half of which are from the last three years — she turns decisively from fashion and from women’s bodies toward art and abstraction — function be damned. Ms. The swings in sensibility can almost be disorienting. This show is propelled by Ms. The drama of putting together the Comme des Garçons Met show.

It’s a rare occasion for Rei Kawakubo to be fêted – she famously refuses interviews and only communicates through her work, or through Comme des Garçons’ President and CEO, Adrian Joffe. 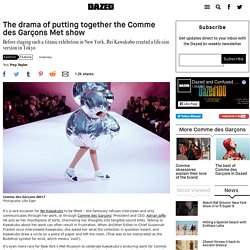 He acts as her mouthpiece of sorts, channeling her thoughts into tangible sound bites. Talking to Kawakubo about her work can often result in frustration. When AnOther Editor-in-Chief Susannah Frankel once interviewed Kawakubo, she asked her what the collection in question meant, and Kawakubo drew a circle on a piece of paper and left the room. (That was to be interpreted as the Buddhist symbol for ensō, which means ‘void’). Comme des Garçons fashion exhibition opens at The Met in New York.

The sculptural clothes of enigmatic Japanese designer Rei Kawakubo are the subject of this year's spring exhibition organised by the Costume Institute at New York's Metropolitan Museum of Art. 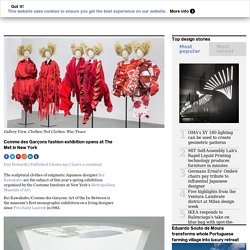 Rei Kawakubo/Comme des Garçons: Art of the In-Between is the museum's first monographic exhibition on a living designer since Yves Saint Laurent in 1983. It includes over 150 garments – designed between the 1980s and now – that demonstrate her avant-garde ideas, her attitude towards fashion as an extension of the body, and her impact on the industry. "Season after season, collection after collection, she upends conventional notions of beauty and disrupts accepted characteristics of the fashionable body," said curator Andrew Bolton. "Her fashions not only stand apart from the genealogy of clothing but also resist definition and confound interpretation. " The exhibition is spilt into nine themes that each examine a duality found in Kawakubo's designs, which lie somewhere between art and clothing. Rei Kawakubo/Comme des Garçons: Art of the In-Between. The Clothes Maker. When Diana Vreeland placed more than 200 of Yves Saint Laurent’s designs in the Costume Institute of the Metropolitan Museum of Art in 1983, no one criticized the clothes: they were beyond reproach. 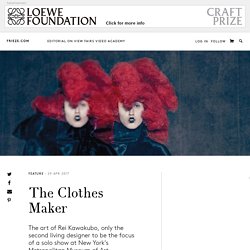 Writing in the catalogue’s introduction, Vreeland – the former editor of US Vogue and special consultant to the Costume Institute – declared: ‘This is the first exhibition the Costume Instituteof the Metropolitan Museum of Art has dedicated to the work of one living designer. Why Yves Saint Laurent? Because he is a genius, because he knows everything about women.’ Vreeland had already altered the conventions of the Institute by bringing in commercial ‘shop’ mannequins for previous exhibitions, abstracting their heads and often anachronistically exaggerating their styling.

Yet, despite the seminal costumes it included, ‘Yves Saint Laurent’ remains a show that is now, perhaps, best known for the criticisms that were levelled against it – most vehemently from art critics. Everything we know about the met’s comme des garçons show. Comme des garcons @ MET. Cfda - rei of light at the met. The met spent over a decade convincing rei kawakubo to do an exhibition.

Since it was announced last year, the Met's exhibition Rei Kawakubo/Comme des Garçons: Art of the In-Between has dominated the thoughts of fashion fans all over the world. 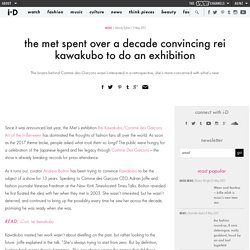 As soon as the 2017 theme broke, people asked what took them so long? The public were hungry for a celebration of the Japanese legend and her legacy through Comme Des Garçons — the show is already breaking records for press attendance. As it turns out, curator Andrew Bolton has been trying to convince Kawakubo to be the subject of a show for 13 years. Speaking to Comme des Garçons CEO Adrian Joffe and fashion journalist Vanessa Friedman at the New York Times-hosted Times Talks, Bolton revealed he first floated the idea with her when they met in 2003. She wasn't interested, but he wasn't deterred, and continued to bring up the possibility every time he saw her across the decade, promising he was ready when she was. 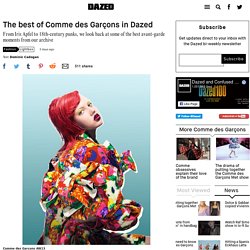 The Japanese brand launched by Rei Kawakubo has had countless breathtaking moments since its debut show in 1981, so you can imagine how difficult it was to delve into the Dazed archive and select the best moments from over the years. Everything you need to know about Comme des Garçons. Bad Taste. 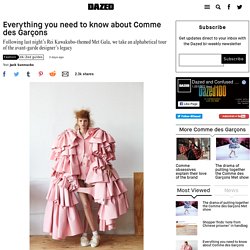 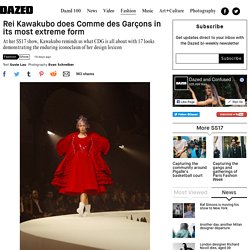 Those two words uttered by Rei Kawakubo might seem laughable after witnessing the cavalcade of strong, bold and almost forceful Comme that came charging at us at her latest show, were it not for the fact that you were so eager to read between the lines of those cryptic clues. However, it turned out to be the perfect oxymoronic phrase to sum up those 17 ensembles, especially as further explanation revealed that the collection was “the purest and most extreme version of Comme des Garçons”.

Inside Michele Lamy’s Comme archive. You can buy a copy of our latest issue here. 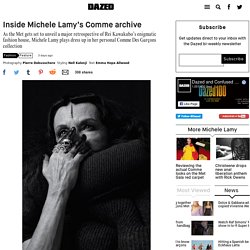 Taken from the spring/summer issue of Dazed: “It’s like fireworks with her. Sometimes you think they’re finished, and then – boom!” In a Parisian photo studio, Michele Lamy – fashion matriarch, curator, performer, restaurateur – is discussing Comme des Garçons founder Rei Kawakubo. Rail upon rail of her archive of sculptural Comme showpieces have been roused from hibernation, cascading stiff red petals brushing up against rows of fat white bows. A near-mythic figure in an industry that thrives on the thrill of a mysterious individual (like the discerningly quiet Kawakubo), Lamy is even better in person than you might imagine from tales of her past: ditching legal studies for striptease, becoming a queen of Los Angeles’ 90s underground, falling for a pattern-cutter that she hired by the name of Rick Owens.

Fashion throwback: The very best of Comme des Garçons campaigns. When Rei Kawakubo found inspiration in Hans Christian Andersen’s ‘The Emperor’s New Clothes’ she came up with a sovereign naked beneath layers of edgy PVC and extraordinary hairstyles created by Julien d’Y’s. 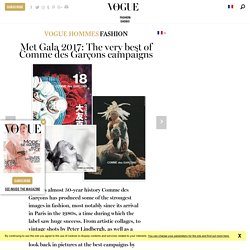 The suits, complete with prints designed in collaboration with Fornasetti, the pair of iconic Nike Dunk sneakers and the slogans emblazoned on certain pieces in the collection all play together to achieve the anti-conventional designer’s creative vision. For her, fashion is subject to multiple interpretations, and her avant-garde designs have served as iconoclastic home-truths for the industry.

With “as never seen before” silhouettes – shapeless shapes for her simplistic tent-like shrouds poised in black austerity, her clothes are never about accentuating or revealing the body, but allowing the wearer to be who they are. Kawakubo has always de-prettified the models who have stomped down the catwalk in a sombre wake, wearing clothes which initially had to be explained to customers on how they should be worn. The notorious black T-shirt, for example, which appeared to have four sleeves when placed flat, yet turned into a chic double tunic when worn. A Portrait of Rei Kawakubo by Those Who Know Her Best. Ask anyone working in the fashion industry which living designer they most admire, and chances are they will say Rei Kawakubo of Comme des Garçons.

We ask some friends, from Stephen Jones to Nick Knight, Alexander McQueen to Björk, just what is it that makes the elusive designer such an unlikely figurehead for fashion, and print a rare written response from the lady herself. Kawakubo is intentionally oblivious to the preoccupations that might motivate her contemporaries: the rise and fall of skirt lengths is of no consequence, the colour, fabric or reference du jour is not even remotely relevant in her world. Four times a year Kawakubo flies from her Tokyo base to Paris, bringing with her an entire, and entirely devoted team, and unveils her men’s and women’s collections, each one different from the last.

"When I questioned her on the thinking behind her most recent offering, she sat down, drew a picture of a circle on a piece of paper, and promptly disappeared" - Susannah Frankel. Rei Kawakubo, Interpreter of Dreams - NYTimes.com. Rei Kawakubo is a 74-year-old Japanese designer who has been making monochromatic, boiled, overstuffed, unraveling, surreal clothes since she began her label, Comme des Garçons, in 1969.

In the ’80s, an era of triangular fluorescent shoulders and moussed bangs, she sent widow’s weeds trailing down the runway. In the ’90s, her clothes grew tumors that resembled bustles, blurring the lines between illness and beauty, what to look at and what to look away from. While her stores stock simple cotton poplin shirts as well as more challenging lumpen jackets and her runway shows present one-off sculptures, the through-line is a thoughtful rejection of should and a strong feeling of perhaps. Met Gala 2017: Rei Kawakubo Is My Harry Styles. Loving people makes you brave. It opens doors — ones in you and around you that you didn’t see before. Fandom is a pure version of this.

It’s an ideal receptacle of feelings because you ask for nothing personal in return. For me, it’s fandom that gave me bravery and friendship.