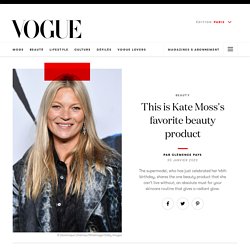 The model and ambassador of the Decorté cosmetics brand doesn't hesitate to share her beauty secrets. This is her chance to learn more about her favourite top product. Thanks to the Decorté skin care products she is the ambassador of - which use Japanese know-how in elaborating skin care products based on plants and water from volcanic springs - Kate Moss has adopted a beauty routine inspired by Japanese culture. Among all Decorté products, there is one that holds a special place on her dressing table: the Vitality Tincture gentle oil infusion essence from the Vi-Fusion range. This innovation strengthens and regenerates the epidermis. Soft-Oil Infusion Essence - Vitality Tincture, Decorté, available at Maison Kosé, 168 euros Translated by Freya Doggett Also on Vogue.fr: Vogue. Vogue. Vogue. 1988, l'été où kate moss est devenue immortelle. Kate Moss est plus british que la reine d'Angleterre, la pluie, les mecs torse-nu et la Stella. 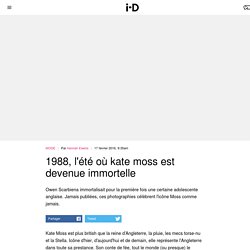 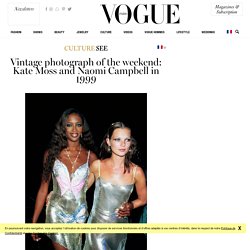 Retour sur ce moment éclatant en cliché vintage. The supers were out in force June 9, 1999, for the "Diamonds are Forever" charity fashion show organised by De Beers and Versace in London. More than 600 guests, including Sean Connery, Pierce Brosnan and Hugh Grant were in the audience, to watch Kate Moss, Naomi Campbell, Amber Valleta, Erin O'Connor and friends walk in gowns created by Donatella Versace, paired with diamond jewelry by De Beers.

Kate Moss fronts the new Vivienne Westwood & Burberry campaign. “She was one of the first designers who made me dream of becoming a designer myself,” says Riccardo Tisci of British fashion’s pioneering grand dame, Vivienne Westwood. 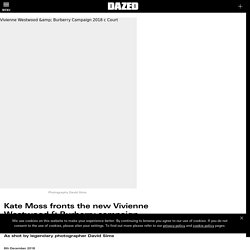 “She is a rebel, a ;punk, and an unrivalled creative British icon who has inspired and influenced legions of designers and artists over the last 50 years.” The CSM student within him is likely pinching himself right now, then, given the two (plus Andreas Kronthaler) have joined forces on a v special collaborative collection for Burberry – which launches today. If you didn’t immediately stop reading at the end of the last sentence and head directly to Burberry to try to get your hands on it, let us fill you in. Described as a union marrying punk and heritage, rebellion and tradition, and past and future, the limited edition collection is made up of classic styles taken directly from the Westwood archive, and reimagined in Burberry’s iconic check. I was 20. She was 18. There was nothing, you know,... - Kate Moss foto: le storie d'amore e di moda di Stephanie Pfriender Stylander.

Watch a teenage Kate Moss star in her first ever music video. Kate? 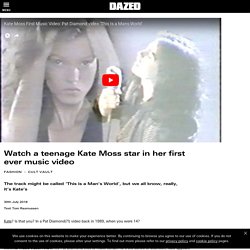 Is that you? In a Pat Diamond(?!) Video back in 1989, when you were 14? No, your eyes are not deceiving you, it is indeed Kate Moss – in the v v v early days of her career – walking around and flipping her hair in what looks like a forest, and fading in and out of the background of this very minimal music video. And while Pat Diamond tries to make certain he’s the centre of attention, Kate appears every time the singer says the words ‘woman’ or ‘girl’ and obviously steals the show right out of his hands.

The footage itself, while important, is a mystery, with no listed details whatsoever and just a caption which reads: Kate Moss First Music Video: Pat Diamond video 'This Is a Mans World’. According to Pat’s well followed artist’s Facebook page, the story of this recently uncovered video goes: “I knew Kate Moss was famous but never once followed her career or even seen (sic) a photo of her since “Man’s World” video was recorded. The answer is nothing. Instagram. Le style Nineties de Kate Moss.

Who is the real kate moss? Every person on the planet knows Kate Moss, right? 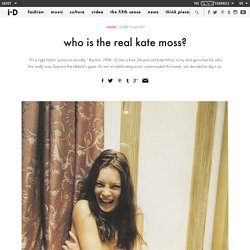 She's the stick chick from Croydon who's made millions by modelling Calvin. The waif-face of British fashion whose high-profile lazy eye is lapped up by a global industry otherwise obsessed with perfection. She takes time out to act as a kick-boxing lesbian in pop promos for Primal Scream. She hangs out with Liam, Patsy, Anna Friel, Marianne Faithful, and her boyfriends are high-profile hunks. All of which makes Kate Moss the only supermodel who's super cool -- a jet-set superstar still burning brightly ten years since being spotted waiting for a plane at JFK.

Kate Moss in 30 previously unpublished illustrations, on show in London. Kate Moss - L'Oreal Audition. Images from kate moss' first photo shoot were found in a drawer. You'd think that when someone's face is as valuable as Kate Moss', there wouldn't be too many rare photos lying around. 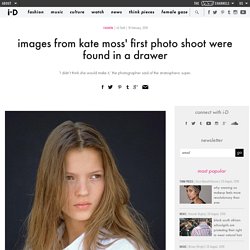 This is a woman of whom a paparazzi shot snapped while buying a pack of smokes can sell out magazines. But apparently photographer Owen Scarbiena wasn't paying quite as much attention to Kate's legion of fans. The year after the icon was discovered at JFK airport by Storm Model Management founder Sarah Doukas, she was offered a shoot with Owen.

At the time, he was focusing on producing especially minimal work as a reaction to much of the late 80s and early 90s art direction. Kate moss. Top 10 early Kate Moss moments. From the moment the word "obsession" left Kate Moss's enviably pouty lips, we were hanging on every word. 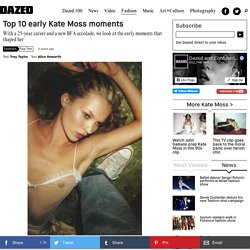 Over a remarkable 25-year career, she's covered Dazed & Confused four extraordinary times (first in February 1999, above). She's slunk past a CK-sporting Marky Mark, lent her presence to several under-the-radar fashion docs, and dated Johnny Depp and Mario Sorrenti (the former with which she appeared on breakfast television, the latter of which shot her for Obsession). Kate has flounced down innumerous runways, and done it all with magnitude, and an attitude and mystery which has kept the multi-faceted model in the pages and on the screen for nearly three decades. Kate Moss' first ever shoot goes on show in London. Kate Moss young first photos David Ross 1. Kate Moss From The Collection of Gert Elfering. Kate Moss' left breast used to shape Champagne glass. News: a London restaurant has created a Champagne coupe from a mould of British model Kate Moss' breast. 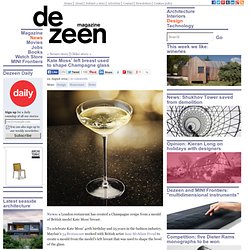 To celebrate Kate Moss' 40th birthday and 25 years in the fashion industry, Mayfair's 34 Restaurant worked with British artist Jane McAdam Freud to create a mould from the model's left breast that was used to shape the bowl of the glass. The 34 Kate Moss Coupe features an elongated slender stem and a bowl decorated with an Art Deco-influenced geometric pattern. Moss' signature is engraved on the base. Popular mythology surrounding the design of the first Champagne coupe – formally known as a Bol Sein – dates it back to the 18th century court of Versailles where it was supposedly shaped around the left breast of French queen Marie Antoinette, although historians suggest it actually pre-dates this period by 100 years.

In the beginning, I did not understand the Kate Moss phenomenon. 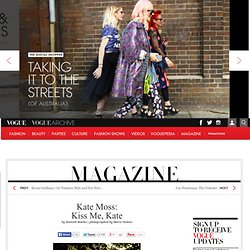 Call me old-fashioned, but after a decade of Amazonian supermodels pulsing with glamorous, bosomy life, I simply didn’t understand the Piaf-bodied waif with the wan, faraway look in her eyes, nor the Corinne Day and Nigel Shafran photographs that set her adrift in bleak welfare apartments or on gray English beaches. And then I saw her across a crowded room at a fashion party in Notting Hill, and I was stopped dead in my tracks by her laughing beauty and preternatural elegance. (“I never did a hairy armpit,” says Kate firmly of those late-eighties grunge moments. Complete Set of 6 Kate Moss Prints by Banksy on artnet. Kate Moss by Banksy on artnet Auctions. Kate Moss Gold Sculpture Auctioned for $900,000. A Sotheby’s employee poses for a photograph with an 18 carat gold sculpture of Kate Moss entitled “Microcosmos (Siren)” by Marc Quinn at Sotheby’s in London October 7, 2011. The piece is estimated to sell between 500,000 – 700,000 pounds ($777,000 – 1.1 million) when it is auctioned in London on October 13.

(Reuters) Supermodel Kate Moss has long since been the “Queen of Fashion” and her July 1, 2011 wedding was a display of opulence and high fashion. (Vogue) Fashion designer Marc Jacobs escorts model Kate Moss as she wears one of his designs as they arrive for the Metropolitan Museum of Art Costume Institute Gala, “The Model As Muse: Embodying Fashion” in New York, May 4, 2009. Une photo de Kate Moss nue vendue 18 000 euros. Même si elle se fait plus discrète depuis son mariage avec Jamie Hince, Kate Moss a toujours autant de succès.