Ivoirian Chicken Jollof Rice. Jollof rice or jollof is a one-pot rice dish popular in many West African countries such as Cameroon, Togo. 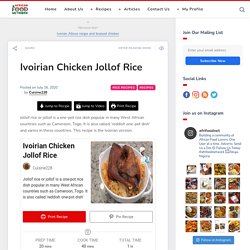 8 Interesting Foods To Make With Honey. Image source: womenshealth Honey is a sweet food substance that is gotten from the sugary secretion of honey bees and other related insects. 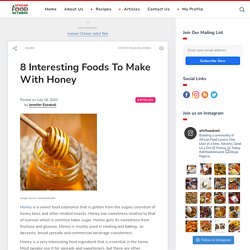 Honey has sweetness relative to that of sucrose which is common table sugar. Honey gets its sweetness from fructose and glucose. Honey is mostly used in cooking and baking, as desserts, bread spreads and commercial beverage sweeteners. Honey is a very interesting food ingredient that is essential in the home. Cakes and Cookies The ultra-sweet taste and gooey texture of honey will come in handy beautifully when making cakes and cookies. Snack Bars The quality of honey is excellent in making soft chewy candy bar. Homemade Bread When aiming to make a moist homemade bread, make sure the recipe includes honey. Baked Beans Honey is a wonderful ingredient to use when making baked beans. Soups Honey is a wonderful ingredient in making lightly sweet soups like carrot, fruit, sweet potato and squash soups. 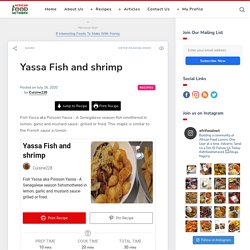 This staple is similar to the French sauce a l’onion. Cuisine228 Fish Yassa aka Poisson Yassa - A Senegalese season fishsmothered in lemon, garlic and mustard sauce- grilled or fried. Attieke braised Chicken. Attieke, is a special delicacy in Ivory Coast, West Africa. 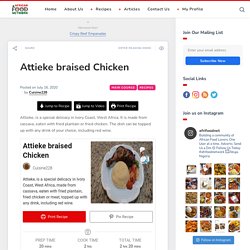 It is made from cassava, eaten with fried plantain or fried chicken. The dish can be topped up with any drink of your choice, including red wine. Cuisine228 Attieke, is a special delicacy in Ivory Coast, West Africa, made from cassava, eaten with fried plantain, fried chicken or meat, topped up with any drink, including red wine. For the Chicken 6 piece chicken8 clove garlic2 tbsp ginger2 cloves¼ cup oil½ onion1 bouillon cubesalt. French toast with Brioche. This is probably the best French toast ever. 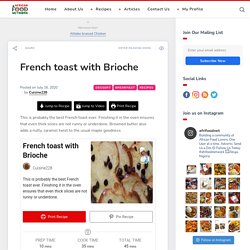 Finishing it in the oven ensures that even thick slices are not runny or underdone. Browned butter also adds a nutty, caramel twist to the usual maple goodness. Stuffed Rolled Pastry. If you love stuffing, and who doesn’t, you have to try this savory and elegant main-dish pastry. 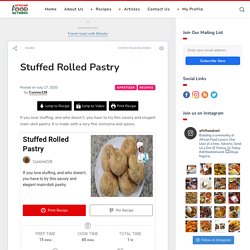 It is made with a very fine semolina and spices. 7 Foods That Are Best Eaten Raw. Image source: forked spoon Most food we eat are in cooked form and this is because foods are more palatable and appealing after they are cooked. 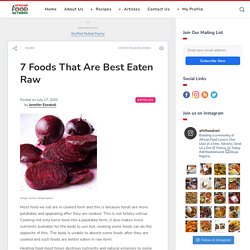 This is not totally untrue. Cooking not only turns food into a palatable form, it also makes more nutrients available for the body to use but, cooking some foods can do the opposite of this. African Food Network. This rum cake recipe is made from scratch, and is drenched in rum flavor without being overpowering. 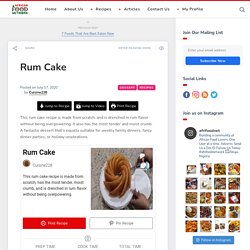 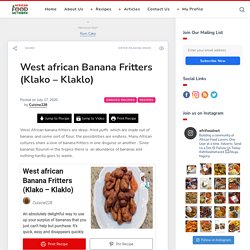 Many African cultures share a love of banana fritters in one disguise or another . Since bananas flourish in the tropics there is an abundance of bananas and nothing hardly goes to waste. Cuisine228 An absolutely delightful way to use up your surplus of bananas that you just can’t help but purchase. It’s quick, easy and disappears quickly. 3 overly ripe bananas large1 cup all purpose flour2 tsp baking powder¾ tsp salt or more to adjust to suit your preference1 tsp garlic½ tsp ginger1 tbsp paprika½ - 1 tsp cayenne pepper depending on your tolerance level Mash plantains with a potato masher or spoon until puree or use a food processor to blend.In a medium bowl add flour, baking powder, salt, garlic, paprika, ginger, cayenne pepper to the mashed plantains.

J. African Food Network. Chicken feet may not offer much meat to speak of, but when they are fried, they make up for it in crunchy texture and chicken-y flavor. 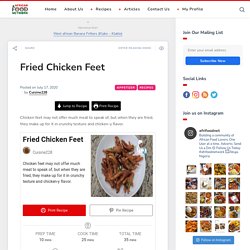 Cuisine228 10 chicken feet4 cloves garlic1 tsp ginger1 bouillon cubesalt Clean the chicken feet (remove claws) Slow cook the chicken feet for about 1 hours in a little fat or lard until they feel soft and flexible to the touch. Set fryer to 350°F and drop in the precooked and declawed feet. Be sure to keep fryer covered while the chicken feet give off any remaining water Once golden brown, pull feet from the fryer and place in a mixing bowl or plate lined with paper towels to drain off excess oil. African Food Network. This recipe is incredibly simple and relies mainly on the tilapia’s sweet flesh and the classic combination of garlic, mustard and lemon. This dish tastes fresh and bright, so if you are not a fan of eating a whole fish you are about to be. The secrets of a good braised tilapia are the cleaning and seasoning of tilapia. Ayimolou (Rice and beans) Ayimolou is a Togolese version of rice served with beans.

African Food Network. Traditionally processed Ogi is the type of Fufu made with fermented cornstarch with the distinctive sour taste. Ogi is simple yet very difficult to prepare with the powdered Ogi flour. Akpan is a fermented cereal pudding typically made from maize. Traditionally, the grains are soaked in water for up to three days, before wet milling and sieving to remove husks. The filtered cereal is then allowed to ferment for up to three days until sour. Peas with Liver and Mustard. Peas with Liver and Mustard is a West African Meal that is simple but delicious. Paprika Yogurt Baked Chicken. Creamy Beet & Potato Salad - African Food Network. One look at this rosy colored Creamy Beet & Potato Salad and you will know why it’s served at Christmastime in Panama. Cut potatoes and beets along with hard-cooked eggs are blended with a creamy, tangy dressing.

To keep your fingers and cutting board from being stained pink, use food-safe plastic gloves when handling the beets and dice them on a glass or porcelain plate. Yam Composition and Nutrients. Image source: brookstropical Yam tubers play very significant roles in the socioeconomic lives of the people of west Africa, the Caribbean, islands of the South Pacific, South-East Asia, India and parts of Brazil. Nigeria contributes significantly to the world’s total production of yam. The composition of yam fibers varies according to species, culture, climate/ edaphic factors of the environment under which it was grown, its maturity at harvest and storage period. Composition of some yam tubers. Yam tubers have different species, and they vary in moisture content, carbohydrate, fat, crude protein, crude fibre and ash.