No baptism, no school: Irish parents fight for equal access to education. High Court Judges Back Humanists Over GCSE. The High Court has ruled against the Education Secretary after she left "non-religious world views" out of a new religious studies GCSE. 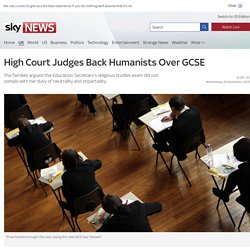 Three families, backed by the British Humanist Association, had brought the case against Nicky Morgan, arguing she had taken a "skewed" approach to the subject. Ms Morgan argued equal consideration was not a legal requirement. Academy trusts accused of failing disadvantaged pupils. The government’s policy of using academy sponsors to revive struggling schools in England has been called into doubt by analysis showing that some large chains of schools were hindering the education of disadvantaged pupils. 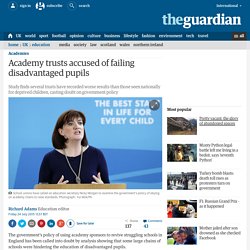 While some academy trusts – chains of sponsored schools grouped under single management – have had outstanding success in improving the results of children from deprived backgrounds, several of the 34 trusts surveyed showed significantly worse results than those seen nationally. The research commissioned by the Sutton Trust, which aims to increase social mobility through education, also found that the worst performing academy chains had seen a decline in their performance between 2012 and 2014, when a similar survey had been conducted – suggesting the chains were unable to improve their own record.

Russell Hobby, general secretary of the National Association of Head Teachers, said: “A significant part of government policy is left on shaky ground. Couple face court after taking children out of school to see sick grandfather. A couple who took their children out of school without permission to visit their sick grandfather in India are being taken to court this week as part of the government’s continuing crackdown on term-time absence. 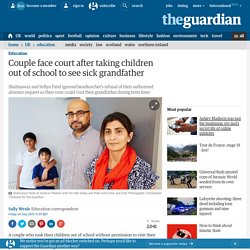 Shahnawaz and Sofiya Patel had put in a request to their two sons’ primary school for an authorised absence to make the trip last December when the children’s grandfather was undergoing surgery. It was the first time the Patels, from Preston, Lancashire, had made such a request, and their children – Omar, 11, and Eiad, eight – have had no previous unauthorised absences, but their school, the English Martyrs Catholic primary in Preston, refused permission. The children’s grandmother died three years earlier in a car crash; they did not go to the funeral and had not seen their grandfather, who survived the accident, for five years – so the Patels went ahead with the trip. John Oliver Tackles Sex Education with an Honest P.

By Conor Soules | Indiewire August 10, 2015 at 1:15PM "Human sexuality, unlike calculus, is something you actually need to know about for the rest of your life. 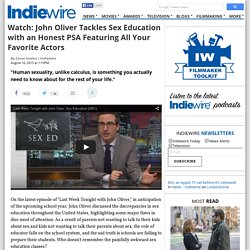 " On the latest episode of "Last Week Tonight with John Oliver," in anticipation of the upcoming school year, John Oliver discussed the discrepancies in sex education throughout the United States, highlighting some major flaws in dire need of attention. As a result of parents not wanting to talk to their kids about sex and kids not wanting to talk their parents about sex, the role of educator falls on the school system, and the sad truth is schools are failing to prepare their students.

Who doesn't remember the painfully awkward sex education classes? READ MORE: Watch: John Oliver Lists His Favorite HBO Documentaries for Your Viewing Pleasure Kids have a lot of important questions regarding the topic. Taxpayers to pay investment firm annual £468,000 rent for free school. Taxpayers are footing an annual bill of nearly £500,000 for one small free school to rent premises from a private investment company, Education Guardian can reveal. 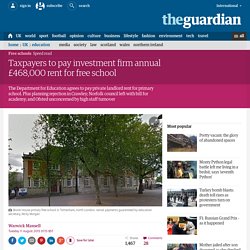 Is this what we must now expect from the education system: taxpayers’ money going into the hands of private landlords, instead of the old-fashioned network of state schools operating free on state-owned land? Claims of ‘irregularities’ at free schools and academies. Two claims of “financial irregularity” at academies and free schools are being made each month, the Observer can reveal. 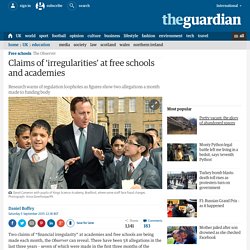 There have been 58 allegations in the last three years – seven of which were made in the first three months of the 2015-16 financial year. The Department for Education (DfE) has refused to name the schools involved. Last week the government announced the launch of 18 new free schools, adding to the 252 already open, with 98 more in the pipeline. Europe's largest arms firm BAE chosen to sponsor failing Furness Academy. - Furness Academy in special measures since March 2012 – Campaigners uneasy about curriculum changes ’to suit needs’ The government has chosen an arms manufacturer as its preferred sponsor to turn around a failing academy in the north of England. 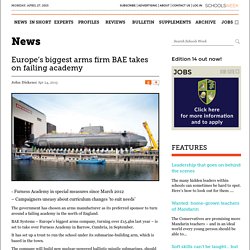 BAE Systems – Europe’s biggest arms company, turning over £15.4bn last year – is set to take over Furness Academy in Barrow, Cumbria, in September. It has set up a trust to run the school under its submarine-building arm, which is based in the town. The company will build new nuclear-powered ballistic missile submarines, should the UK’s Trident programme get the go-ahead next year. BAE Systems Marine Submarines Academy Trust will be tasked with turning around the troubled school that has been in special measures since March 2012. Despite a subsequent Ofsted inspection in May 2013 and five monitoring visits, inspectors say it is still not improving enough.

Teachers urged to 'disengage' from promotion of British values. Teachers are being urged to ignore the government’s drive on promoting fundamental British values in schools, amid claims that it is “ill-considered, ill-defined and counterproductive”. 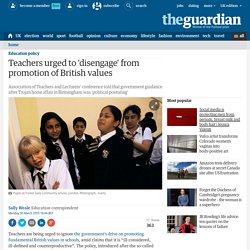 The policy, introduced after the so-called Trojan horse plot in which hardline Islamists were accused of trying to take over a small number of Birmingham schools, was “totally out of proportion” and vulnerable to misinterpretation, a conference was told. Fact Check: are free schools raising education standards? Free schools are having an important effect on collaboration and raising standards in nearby schools … We can see free schools are both popular but they’re also effective. 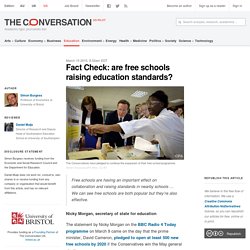 'Just use lots of lube!' – what we learned from sex education. In our new “Virgin voters” series, we listen to what young people and first-time voters have to say about the election issues that matter most to them. 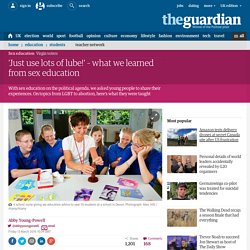 This week, following calls for sexual consent lessons to be made compulsory in schools, we talk about sex education. Young people and sex education: what’s going on? Calls for compulsory consent education are gaining momentum. A petition set up by the Everyday Sexism Project and End Violence against Women Coalition has received 36,735 signatures. Government response to education committee report on academies and free schools: the wills and won’ts. The Department for Education has published its response to the education committee’s report on academies and free schools. In many cases, the department claims it already has processes in place to meet the committee’s recommendations. Student rewards such as cash and free trips fail to improve GCSE results. Offering rewards such as cash payments or free trips make pupils work harder in class but fail to improve their exam results, according to an intensive £1.6m study involving 10,000 children.

The project involved pupils studying for GCSE exams at 63 schools in deprived areas across England, and was aided by a team of academics that included superstar professors such as Steven Levitt, the co-author of Freakonomics, and John List of the University of Chicago. Professor Simon Burgess of Bristol University, who helped design the study, which was funded by the Education Endowment Foundation, said: “I was very disappointed with these results. No proof that academies raise standards, inquiry finds. A parliamentary inquiry into the coalition’s education reforms has called on the government to stop exaggerating the success of academies and to be more open about how it runs the programme.

The report by the cross-party education select committee said that although it was clear that academisation led to greater competition which helped drive improvement in schools, there was not yet proof that academies raised standards either for disadvantaged children or overall. Academy boss earns more than chief executive of NHS England. An academy chief executive has been handed, we think, a record salary for anyone overseeing schools in the state sector. Sir Daniel Moynihan, chief executive of the south-London based Harris Federation, earned £375,611 in 2013-14. This is more than twice the pay of the prime minister and represented a 13% rise on Moynihan’s 2012-13 salary of £331,195.

Not only do the figures, disclosed in Harris’s annual accounts, dwarf those of all other big academy trusts – Ark Schools, often cited alongside Harris as one of the most successful academy groups, had a highest earner on £170,000-£180,000, they are comfortably ahead of the pay of all council chief executives, as charted by a survey by the Taxpayers’ Alliance (pdf) last year. The largest local authorities are far bigger than Harris, which runs 28 academies and eight free schools. Teachers with top degrees, private schools' tax breaks and weak academies. Good week for ... Teachers with top degrees. Almost three-quarters of new graduate teacher trainees have a 2:1 degree or better, and a higher proportion than ever have a first class degree, according to the Department for Education.

Engineering. Trojan horse affair: five lessons we must learn. As the Trojan horse furore in Birmingham continues, and spreads, five issues emerge that require urgent national attention. Rupert Murdoch - the Dark Lord in the classroom. The U.K.'s Year of Code director, Lottie Dexter, doesn't know how to code. The Michael Gove random policy generator. School appoints 'head of research' 11 June 2014Last updated at 19:56 ET By Sean Coughlan BBC News education correspondent Schools should be their own research laboratories, says Wellington College. Teachers demand training in neuroscience to improve classroom practice. Thousands of teachers are set to receive training in neuroscience after union members called for guidance on how the subject could be applied in the classroom.

Members of the Association of Teachers and Lecturers (ATL) at the union’s annual conference narrowly voted for a motion calling for training materials and policies on applying neuroscience to education and for further research on how technology can be used to develop better teaching. Julia Neal, a member of the council for the union’s leadership division, AMiE, told delegates in Manchester that neuroscience could help teachers understand the mental processes involved in learning. “Like it or not, our roles as teachers and educators are bound to change,” she said. 'Trojan horse' report suggests Lord Nash is governor of too many schools. Lord Nash and a case of 'undue influence'? 9-Year-Old Who Changed School Lunches Silenced By Politicians.

Academy chain accused of 'privatisation by stealth' over plan to outsource jobs. How important is education secretary's core subjects plan? Yeah, Tristram, an oath is really going to turn a bad teacher into a good one. ‘Trojan horse’ schools have done little to fix problems – Ofsted. Parents in Wales told to send sick children to school. London’s GCSE success due to ethnic diversity in capital’s schools – report.