Full stack startups. Many of today’s most exciting startups were tried before in a different form. 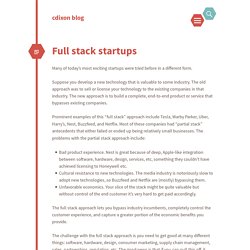 Suppose you develop a new technology that is valuable to some industry. The old approach was to sell or license your technology to the existing companies in that industry. The new approach is to build a complete, end-to-end product or service that bypasses existing companies. Prominent examples of this “full stack” approach include Tesla, Warby Parker, Uber, Harry’s, Nest, Buzzfeed, and Netflix. Most of these companies had “partial stack” antecedents that either failed or ended up being relatively small businesses. USV Conversations. Tech Startups vs Rock Bands. The Joyless World of Data-Driven Startups — Backchannel. Tech Startups vs Rock Bands. Rhapsody Snaps Up Two Music Startups. 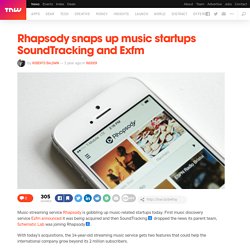 First music discovery service Exfm announced it was being acquired and then SoundTracking dropped the news its parent team, Schematic Lab was joining Rhapsody. With today’s acquisitions, the 14-year-old streaming music service gets two features that could help the international company grow beyond its 2 million subscribers. Spanish startups in 2014: facts and figures. The final figures for 2014 are in, thanks to Spanish research firm Venture Watch. 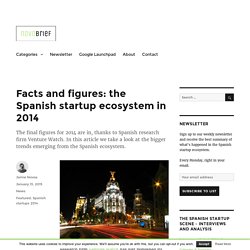 In this article we take a look at the bigger trends emerging from the Spanish ecosystem. Research firm Venture Watch has just published its 2014 report, analyzing the Spanish startup ecosystem and its bigger trends. What follows is a summary of the most significant facts and figures related to Spanish startups and the country’s investment ecosystem. Musicians Are A Lot Like Technology Startups. Life experiences (especially early ones) inspire the musician’s music and the entrepreneur’s business. 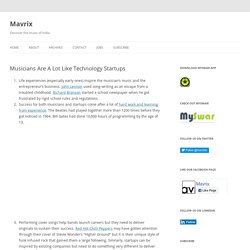 John Lennon used song-writing as an escape from a troubled childhood. Richard Branson started a school newspaper when he got frustrated by rigid school rules and regulations.Success for both musicians and startups come after a lot of hard work and learning from experience. 5 Startups Shining Sun On Iberian Tech - Pivotl. The Iberian Peninsula is more commonly thought of as a beach holiday destination or, more recently, as a region facing some tough times economically. 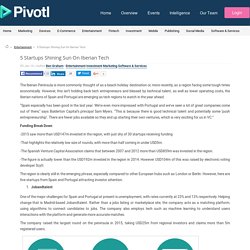 However, this isn’t holding back tech entrepreneurs and blessed by technical talent, as well as lower operating costs, the Iberian nations of Spain and Portugal are emerging as tech regions to watch in the year ahead. “Spain especially has been good in the last year. The Truth About Blogging. The Truth About Blogging “Look, I am not telling you not to write on Medium, OK? You can give it a try. I am just saying you’ll regret it big time for not having blogged on your website. Do you know why?” Without waiting for my answer, he opened an article on his computer and started reading the following sections out loud:

A KPI dashboard for early-stage SaaS startups. [Update 12/20/2013: I have extended the dashboard to include multiple pricing tiers and annual subscription plans. 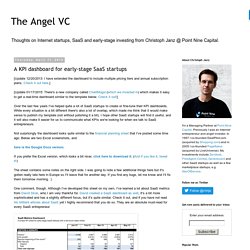 Check it out here.] [Update 01/17/2015: There's a new company called ChartMogul (which we invested in) which makes it easy to get a real-time dashboard similar to the template below. Check it out!] Play or die: the musical chairs of tech startups. 15 European startups making waves in the music industry. Here's How The Record Industry Stomps Out Startups It Hates. Why Startups Are More Successful than Ever at Unbundling Incumbents. Scale isn’t what it used to be. 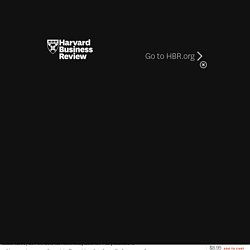 It’s never been easier to start a company, and as a result new entrants are unbundling incumbents’ businesses and chipping away at their advantage. Upstarts like The Honest Company, Warby Parker, and Airbnb are able to quickly win market share from leading businesses like Procter and Gamble, Luxotica, and Starwood Hotels by decomposing markets into highly customized niches so that the incumbents can’t compete on scale alone.

Where Private Investors Access Proven Startups. Las 3+1 tareas del CEO de una startup. How I Got 6.2 Million Pageviews and 144,920 Followers. Let’s start with the soft stuff before getting a bit more technical: → Part 1 — Preparing for the storm ← Writing is only part of the story. 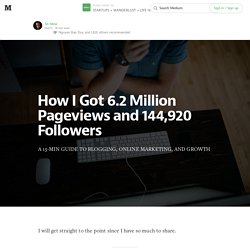 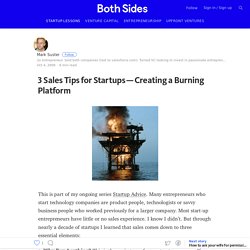 Many entrepreneurs who start technology companies are product people, technologists or savvy business people who worked previously for a larger company. More than ever: 44 international VC firms invested in Spanish startups in 2015. A visual representation of Spanish startups and the NASDAQ: the golden years of 2006-2012. While the first Spanish technology companies were created in the 90s, from 2007 onwards we’ve seen a significant increase in the number of local startups. 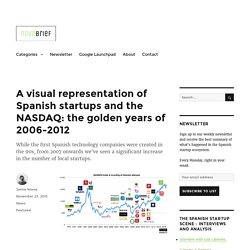 There’s no better way of realising changes in an industry than building visual representations of it. A lot has been written over the past few months and years about the Spanish technology ecosystem, and many have wondered if the country has a big enough tech sector to be considered an ecosystem and if it could once compete with the likes of London, Berlin, Paris os Stockholm.

Seleccionada entre las startups que estarán en la segunda edición de Rethink Music. Investment in Spanish startups to surpass $500M in 2015 for the first time ever. There's a dark side to startups, and it haunts 30% of the world's most brilliant people. 16 More Startup Metrics. A few weeks ago, we shared some key startup metrics (16 of them, to be exact) that help investors gauge the health of a business when investing in it. But to repeat ourselves for a moment: Good metrics aren’t just about raising money from VCs … they’re about running the business in a way where founders can know how — and why — certain things are working (or not), and then address them accordingly. In other words, these metrics aren’t just for pitching but for discussing in subsequent board meetings, quarterly updates, and management meetings. As one reader shared: “Drive with them, don’t just ‘report’ them”. So (and with thanks to all the folks on Twitter who shared their feedback or built on our previous post), here are 16 more metrics that we think are important to add to the list.

Startup Growth Calculator. 16 Startup Metrics. We have the privilege of meeting with thousands of entrepreneurs every year, and in the course of those discussions are presented with all kinds of numbers, measures, and metrics that illustrate the promise and health of a particular company. Sometimes, however, the metrics may not be the best gauge of what’s actually happening in the business, or people may use different definitions of the same metric in a way that makes it hard to understand the health of the business. So, while some of this may be obvious to many of you who live and breathe these metrics all day long, we compiled a list of the most common or confusing ones. The European Startup Market. At USV, we’ve been investing in European startups since 2008. Currently 22% of our active portfolio is in Europe. Since 2010, we’ve invested in 47 companies (roughly 8 per year) and 11 of them have been in Europe (roughly 2 per year).

So over the past six years, roughly 25% of our investments have been in Europe. The Billion Dollar Startup Club. The Spanish startup ecosystem in 2015. Analysis of the Spanish startup ecosystem in 2015 and the most relevant Venture Capital deals and firms. Today was the official unveiling of the 2016 edition of 4YFN, one of the leading startup and technology events in Spain. Organised by Mobile World Capital, the conference will take place in Barcelona from February 22 to 25 and will bring together 12,000 attendees, 500 investors and startups from all over Europe.

For this year’s edition, MWC asked me to put together a report on the Spanish startup ecosystem, which you can see embedded above. Southern Europe’s startup ecosystem is heating up. A Two-part Rule for Naming Your Startup. Why every startup needs a shareholders' agreement. Startup Premise Data collects, sells better data. How Uptake Beat Slack, Uber To Become 2015's Hottest Startup. Spanish startup exits compared: Trovit, La Nevera Roja and Akamon.

Those were the days my friend my friend we thought they'd never end. Busted flat in Baton Rouge waiting for a train feeling nearly faded as my jeans. How much should your startup raise and at what valuation? — Entrepreneur toolkit. Startup Europe Partnership – Europe, from Unicorns to Reality. There’s life on planet Scaleups! A seed-stage investor explains what he looks for when gauging startup potential. How Has Product Hunt Become Such a Critical Startup Website? (56) How can I create a snazzy startup name like "Digg", "Reddit", "Google" or "Bing"? - Quora. The story of Tidal: How Jay Z bought a European startup no one had ever heard of and turned it into one of the most famous music companies in the world. Marc Andreessen on Why Software Is Eating the World. Palantir 101 Video. Palantir Technologies - Quora. Companies & Reviews. How Companies Can Avoid the Innovator’s Dilemma.

Pooch Perk: More Companies Embracing Pet-Friendly Office Policy. Record companies the biggest winners in forecast consumer shift from ownership to access. Media Companies: Your Nightmare Piracy Scenario has Arrived, And Its Called Popcorn Time. Why The Next Generation of Online Video Companies Will be Vertical.