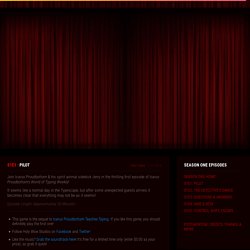 It seems like a normal day in the Typescape, but after some unexpected guests arrives it becomes clear that everything may not be as it seems! Episode Length: Approximately 20 Minutes This game is the sequel to Icarus Proudbottom Teaches Typing. If you like this game, you should definitely play the first one! Elegy for a Dead World. In Elegy for a Dead World, you travel to distant planets and create stories about the people who once lived there. 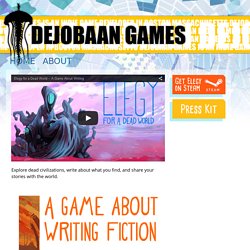 Three portals have opened to uncharted worlds. Earth has sent a team of explorers to investigate them, but after an accident, you are the sole survivor. Your mission remains the same: survey these worlds and write the only accounts of them that outsiders will ever know. The game is out now on Windows, Mac, and Linux on Steam. We created Elegy so that everyone can write. As you encounter these elements, Elegy will cue you with a series of writing prompts. There are many stories to write and many places to visit, from the crumbling museum, stone faces and sweltering plains of Shelley’s World to the central planning station on Keats’ World to the desiccated shores and frigid tundra of Byron’s World. Each world offers multiple sets of prompts, each intended to inspire you to write a different story about it. Selected preview articles and other mentions: Storium. ButtonMasher: Storytelling beats action in new games - tech - 22 May 2014.

ButtonMasher is our column about video games and gaming culture – from the offbeat fringes to the cutting-edge innovations behind the latest blockbusters Are you sitting comfortably?

When it comes to storytelling, video games have never been a patch on novels or films, usually emphasising action at the expense of narrative. But that's changing. Writers are turning to games as their medium of choice, and a handful of forthcoming games have writing itself as their objective. "People love to create," says Ichiro Lambe, founder of game studio Dejobaan in Boston, Massachusetts. A similar idea underpins Storium, a game in which players collaborate to write their own narrative. "The Holy Grail of storytelling is not telling a story but co-creating a story with the player," Lambe says.

Make games not war These two games are part of a new focus on narrative across the board. So Gone Home strips out combat entirely, leaving just a narrative. Choose your adventure. The write stuff: Elegy for a Dead World preview. Dejobaan Games and Popcannibal's upcoming experimental game Elegy for a Dead World wants you to write. 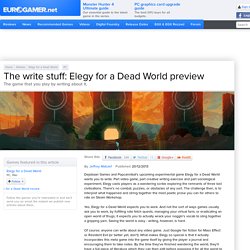 Part video game, part creative writing exercise and part sociological experiment, Elegy casts players as a wandering scribe exploring the remnants of three lost civilisations. There's no combat, puzzles, or obstacles of any sort. The challenge then, is to interpret what happened and string together the most poetic prose you can for others to rate on Steam Workshop. Elegy for a Dead World turns players into poets. Dejobaan has a reputation for crafting obnoxiously titled, outrageous games such as AaaaaAAaaaAAAaaAAAAaAAAAA!!! 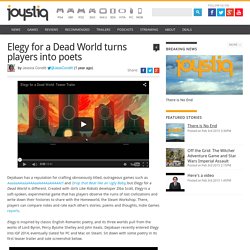 And Drop that Beat like an Ugly Baby, but Elegy for a Dead World is different. Created with Girls Like Robots developer Ziba Scott, Elegy is a soft-spoken, experimental game that has players observe the ruins of lost civilizations and write down their histories to share with the Homeworld, the Steam Workshop. There, players can compare notes and rate each other's stories, poems and thoughts, Indie Games reports. Elegy is inspired by classic English Romantic poetry, and its three worlds pull from the works of Lord Byron, Percy Bysshe Shelley and John Keats. Dejobaan recently entered Elegy into IGF 2014, eventually slated for PC and Mac on Steam. 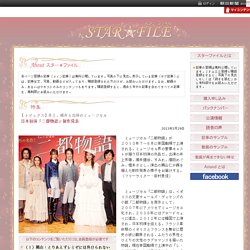