Things to do in Melbourne 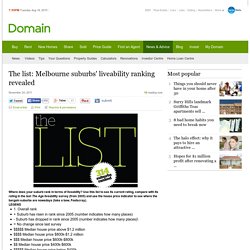 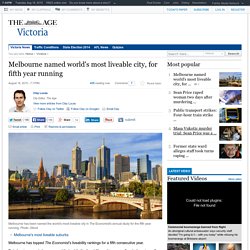 Photo: iStock Melbourne's most liveable suburbs Melbourne has topped The Economist's liveability rankings for a fifth consecutive year. But planning experts have warned that, while the liveability rankings were "marketing nirvana", they were meaningless for much of Melbourne, and got in the way of improving the city. And a social services group said the ranking failed to recognise the growing disparity between those rich enough to live where good jobs and services were, and those in areas of high unemployment, poor transport and entrenched disadvantage. Australian cities were found to be "a relative picture of stability", while 20 per cent of the cities surveyed by The Economist magazine's Intelligence Unit experienced declines in liveability over the past year.

'Miniature Melbourne': Nathan Kaso Captures Australia's Tiny Side With Tilt-Shift Time-Lapse Video. Businessinsider. Untitled. 10 Interesting Facts about Melbourne. 53 Reasons Living In Melbourne Ruins You For Life. Timetables. Booking.com: 7 hotéis em Frankston, Austrália. Reserve agora o seu hotel! Ferntree Gully Walks. Forest near Ferntree Gully There are 1000 reasons not to do the 1000 Steps in Ferntree Gully and every one of them is a person. 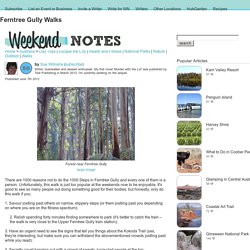 Unfortunately, this walk is just too popular at the weekends now to be enjoyable. It's good to see so many people out doing something good for their bodies, but honestly, only do this walk if you: Best Happy Hours in Melbourne. PROJECTOR BIKE.

Cycling. Camping. The Plus Ones - Melbourne's Best Events. Broadsheet. Your privacy is important to us. 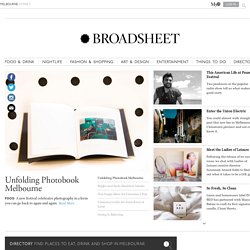 Your information is collected by Broadsheet Media Pty Ltd (Broadsheet) and will be used and held in accordance with our Privacy Policy. 20 Ways To Eat A Tim Tam. Main yarra trail. Walk Details - Walking Maps. Tip: If the route doesn’t follow the path you intended, try dragging the route line. 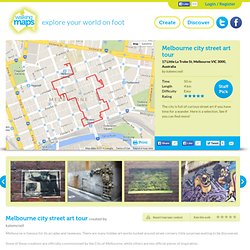 Also note: you can toggle this feature on and off as you are creating your walk. Add the information to the right. A descriptive title and summary are very useful for other walkers who are searching for a suitable walk. You can also use the description box to add detail. Tip:zoom in to improve accuracy. Adding a photo to each Point of Interest is a great way to improve the usefulness of this feature and will be appreciated by other walkers.You can add up to 40 Points of Interest. Note: Your walk can be more than one ‘Type’ and may contain more than one ‘Feature’. When you’re done, click ‘Publish walk’. Congratulations, your walk is now live. 50 Things To Do In Melbourne. 1. 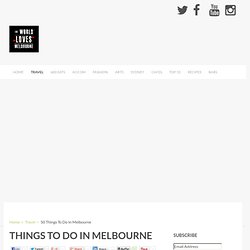 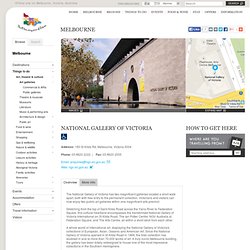 Victorians and visitors can now enjoy two public art galleries within one magnificent arts precinct. Stretching from the top of Saint Kilda Road across the Yarra River to Federation Square, this cultural heartland encompasses the transformed National Gallery of Victoria International on St Kilda Road, The Ian Potter Centre: NGV Australia at Federation Square, and The Arts Centre, all within a short stroll from each other. A whole world of international art, displaying the National Gallery of Victoria's collections of European, Asian, Oceanic and American Art. Since the National Gallery of Victoria opened in St Kilda Road in 1968, the total collection has doubled in size to more than 70,000 works of art. The 2014 Gertrude Street Projection Festival, Event, Melbourne, Victoria, Australia. City Circle Tram, Attraction, Melbourne, Victoria, Australia. The City Circle Tram service provides a free and convenient way to get around central Melbourne. 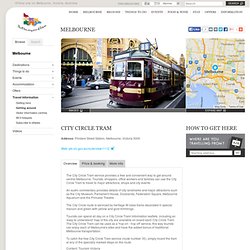 Tourists, shoppers, office workers and families can use the City Circle Tram to travel to major attractions, shops and city events. An audio commentary provides details of city landmarks and major attractions such as the City Museum, Parliament House, Docklands, Federation Square, Melbourne Aquarium and the Princess Theatre. The City Circle route is serviced by heritage W class trams decorated in special maroon and green with yellow and gold trimmings.

Tourists can spend all day on a City Circle Tram! Information leaflets, including an 'easy to understand' map of the city are available on board each City Circle Tram. Discover the Southern Grampians - Melbourne. A chance visit to the 2012 Regional Victoria Living Expo opened my mind to the endless possibilities just mere hours from Melbourne. 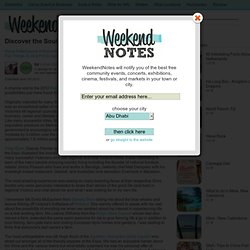 Originally intended for many Melburnians considering a move to the countryside, the event was an exceptional safari of interesting places and activities.