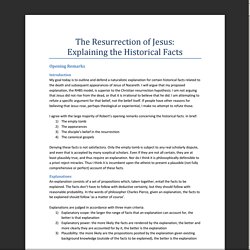 Reburial: Under one possible scenario, Jesus’ burial in Joseph’s tomb was only ever intended to be temporary, a decision made as a result of the fast approaching Sabbath, the nearness of Joseph’s tomb, and the desire to avoid another disruptive public spectacle. Temporary burial hypothesis is plausible in light of several known facts. o Jewish law required bodies to be taken down before evening: (Deuteronomy 21:22) “If a man has committed a sin worthy of death... and you hang him from a tree, his corpse shall not hang all night on the tree, but you shall surely bury him on the same.

If Jesus was Raised, Could the Bible be False? Synopsis In this piece I consider what we can infer about the bible, in particular the New Testament, beginning from a belief in the divinity of Jesus. 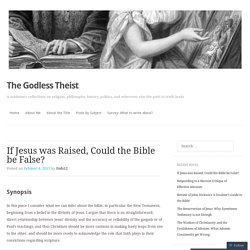 I argue that there is no straightforward, direct relationship between Jesus’ divinity and the accuracy or reliability of the gospels or of Paul’s teachings, and thus Christians should be more cautious in making hasty leaps from one to the other, and should be more ready to acknowledge the role that faith plays in their convictions regarding scripture. Introduction. Should I Worship an Evil God? The Question of Christianity: A Personal Manifesto. In this article I outline the general framework of my overarching approach to the question of whether I should become a Christian. 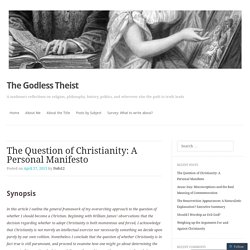 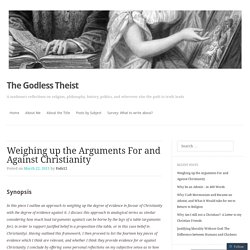 I discuss this approach in analogical terms as similar considering how much load (arguments against) can be borne by the legs of a table (arguments for), in order to support justified belief in a proposition (the table, or in this case belief in Christianity). Having outlined this framework, I then proceed to list the fourteen key pieces of evidence which I think are relevant, and whether I think they provide evidence for or against Christianity. I conclude by offering some personal reflections on my subjective sense as to how these different evidences balance out against each other. Why be an Atheist – in 400 Words. Introduction I was recently asked to write a 400 word piece on some arguments one might give to a religious believer to cause them to doubt their beliefs. 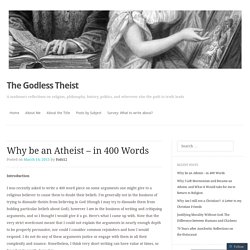 I’m generally not in the business of trying to dissuade theists from believing in God (though I may try to dissuade them from holding particular beliefs about God), however I am in the business of writing and critiquing arguments, and so I thought I would give it a go. Here’s what I came up with. 70 Years after Auschwitz: Reflections on the Holocaust. Introduction Seventy years ago, on the 27th of January 1945, elements of the 332nd Rifle Division of the Red Army liberated the concentration and extermination camps at Auschwitz. 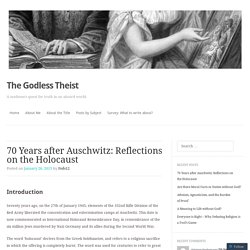 This date is now commemorated as International Holocaust Remembrance Day, in remembrance of the six million Jews murdered by Nazi Germany and its allies during the Second World War. The Godless Theist. Christianity vs Atheism: Key Writings. 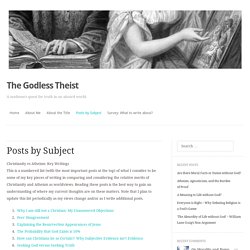 What Lennox Got Wrong: A Refutation of his Key Arguments. Synopsis In this piece I offer a critique to some of the major arguments raised by John Lennox in his recent talks at Melbourne, both at the Friday night ‘Cosmic Chemistry’ public lecture, and also the Saturday ‘Reasons for Faith’ conference. 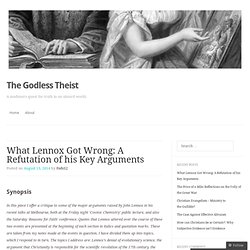 Quotes that Lennox uttered over the course of these two events are presented at the beginning of each section in italics and quotation marks. These are taken from my notes made at the events in question. I have divided them up into topics, which I respond to in turn. Atheism, Agnosticism, and the Burden of Proof. Synopsis. 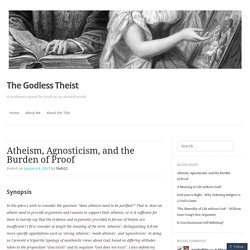 Everyone is Right – Why Debating Religion is a Fool’s Game. I am increasingly coming to the view that religious debate, philosophy, and apologetics are little more than an elaborate game, and a tiresome one at that. 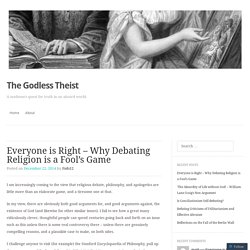 In my view, there are obviously both good arguments for, and good arguments against, the existence of God (and likewise for other similar issues). I fail to see how a great many ridiculously clever, thoughtful people can spend centuries going back and forth on an issue such as this unless there is some real controversy there – unless there are genuinely compelling reasons, and a plausible case to make, on both sides.

The trouble is that all of these arguments and questions are so complicated, so multi-faceted, and so interwoven with other related philosophical, scientific, psychological, and historical issues, that it is essentially impossible for any sufficiently well-read, clever person to be placed in a position where they feel compelled to significantly change their views. So what is my takeaway after all this rambling? The Godless Theist. Synopsis In this piece I am going to do something rather presumptuous: I am going to tell Christians what I think should be the proper relationship between faith and reason. I expect both Christians and Atheists will disagree with much of what I have to say, but since when does that stop me?

A madman's quest for truth in an absurd world. The Probability that God Exists. Synopsis Consider the proposition “some sort of deistic or theistic God exists”, where “God” need not necessarily be a personal God, but is understood to be more than a transcendent spirit or panentheistic notion of ‘God as nature’. Happiness and the Good Life. Synopsis I argue that happiness, meaning subjective wellbeing, is not especially important, and that what we as individuals and as a society should focus far more attention on is the notion of living a ‘good life’. Introduction. Peer Disagreement. Synopsis Many intelligent people disagree about many important questions. This means that many intelligent people are wrong about many important questions, and it is not possible to tell if you are one of these people simply based on how confident you are. Looking at the arguments on both sides doesn’t address the problem, because everyone claims to do that, and reaches different conclusions.

Nor does attempting to explain how disagreement is consistent with your worldview address the problem, as it begs the question of how you know that your worldview is correct.