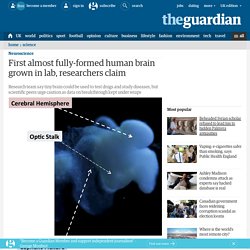 The team behind the feat hope the brain could transform our understanding of neurological disease. Though not conscious the miniature brain, which resembles that of a five-week-old foetus, could potentially be useful for scientists who want to study the progression of developmental diseases. It could also be used to test drugs for conditions such as Alzheimer’s and Parkinson’s, since the regions they affect are in place during an early stage of brain development. The brain, which is about the size of a pencil eraser, is engineered from adult human skin cells and is the most complete human brain model yet developed, claimed Rene Anand of Ohio State University, Columbus, who presented the work today at the Military Health System Research Symposium in Fort Lauderdale, Florida. 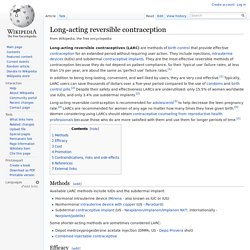 They include injections, intrauterine devices (IUDs) and subdermal contraceptive implants. They are the most effective reversible methods of contraception because they do not depend on patient compliance. So their 'typical use' failure rates, at less than 1% per year, are about the same as 'perfect use' failure rates.[1] In addition to being long-lasting, convenient, and well liked by users, they are very cost effective.[1] Typically, LARC users can save thousands of dollars over a five-year period compared to the use of condoms and birth control pills.[2] Despite their safety and effectiveness LARCs are underutilized: only 15.5% of women worldwide use IUDs, and only 3.4% use subdermal implants.[2] Methods[edit] Available LARC methods include IUDs and the subdermal implant: Efficacy[edit] Cost[edit] Promotion[edit]

Intrauterine Device (IUD) Birth Control and Side Effects. No One Murdered Because Of This Image. WASHINGTON—Following the publication of the image above, in which the most cherished figures from multiple religious faiths were depicted engaging in a lascivious sex act of considerable depravity, no one was murdered, beaten, or had their lives threatened, sources reported Thursday. 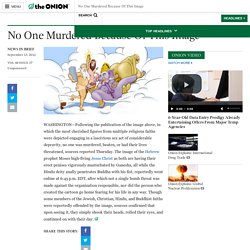 The image of the Hebrew prophet Moses high-fiving Jesus Christ as both are having their erect penises vigorously masturbated by Ganesha, all while the Hindu deity anally penetrates Buddha with his fist, reportedly went online at 6:45 p.m. Sam Harris and Dave Rubin Talk Religion, Politics, Free Speech (Full Interview) Practical Ethics - Princeton University. About the Course In this course you will be encouraged to think about some of the ethical issues that we all face in our daily lives, and as concerned, global citizens. 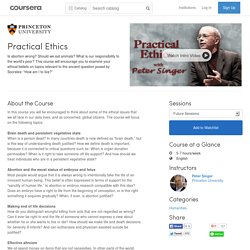 The course will focus on the following topics: Brain death and persistent vegetative state When is a person dead? In many countries death is now defined as “brain death,” but is this way of understanding death justified? Philosophy Courses. Sam Harris vs Muslim apologists 1/3. The Euthanasia Debate – Singer v Fisher – Should Voluntary Euthanasia be Legalised? Euthanasia debate: Professor Peter Singer versus Archbishop Anthony Fisher OP. Does Science Prove God? No. 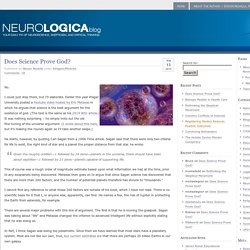 I could just stop there, but I’ll elaborate. Earlier this year Prager University posted a Youtube video hosted by Eric Metaxas in which he argues that science is the best argument for the existence of god. The Problem of Evil I. Introduction: The Logical Argument From Evil “Is [God] willing to prevent evil, but not able? 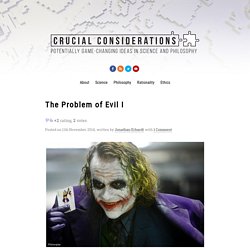 Africa Is Way Bigger Than You Think - Scientific American Blog Network. Look at the usual flat map of the world and it appears that Greenland is nearly as big as Africa. 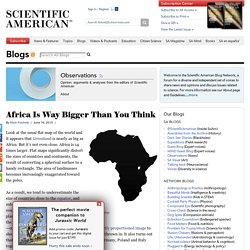 But it’s not even close. Africa is 14 times larger. Flat maps significantly distort the sizes of countries and continents, the result of converting a spherical surface to a handy rectangle. The area of landmasses becomes increasingly exaggerated toward the poles. God: Yes or No? Dinesh D'Souza vs. Peter Singer. Richard Carrier. Richard Cevantis Carrier (born December 1, 1969) is an atheist activist, author, public speaker, and blogger. 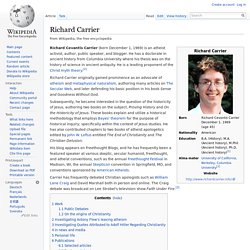 He has a doctorate in ancient history from Columbia University where his thesis was on the history of science in ancient antiquity. He is a leading proponent of the Christ myth theory.[2] Richard Carrier originally gained prominence as an advocate of atheism and metaphysical naturalism, authoring many articles on The Secular Web, and later defending his basic position in his book Sense and Goodness Without God. Subsequently, he became interested in the question of the historicity of Jesus, authoring two books on the subject, Proving History and On the Historicity of Jesus.

These books explain and utilize a historical methodology that employs Bayes' theorem for the purpose of historical inquiry; specifically within the context of Jesus studies. Alien Super-Civilizations Playing Great Game of Hide & Seek. Scientists have taken a hard look at 100,000 galaxies and have determined that none of them contain obvious heat signatures that might be produced by a super advanced alien civilization. 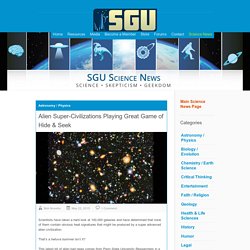 That’s a helluva bummer isn’t it? This latest bit of alien bad news comes from Penn State University Researchers in a paper from the Astrophysical Journal Supplement Series called “Glimpsing Heat from Alien Technologies Survey” The idea and the assumptions behind this is that some super-advanced aliens would spread throughout their home galaxy.

Such an advanced culture would likely be able to harness vast energies to support this widespread colonization and other geeky things that such societies are wont to do. This is typical of what’s called Type III civilizations on the Kardashev scale. One obvious source of energy they could potentially mine would be the tremendous radiant energy emitted by stars. Satellite accumulated during its run starting in 2009. Adam, Eve, and Evolution. The controversy surrounding evolution touches on our most central beliefs about ourselves and the world. 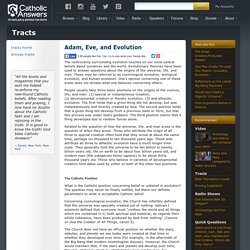 Evolutionary theories have been used to answer questions about the origins of the universe, life, and man. These may be referred to as cosmological evolution, biological evolution, and human evolution. Crucifixion. Crucifixion is a form of slow and painful execution in which the victim is tied or nailed to a large wooden cross and left to hang until dead. It is principally known from antiquity, but remains in occasional use in some countries. The crucifixion of Jesus is a central event in Christianity, and the crucifix (sometimes depicting Jesus nailed onto it) is the main religious symbol for many Christian churches. Terminology[edit] Ancient Greek has two verbs for crucify: ana-stauro (ἀνασταυρόω), from stauros, "stake", and apo-tumpanizo (ἀποτυμπανίζω) "crucify on a plank," [1] together with anaskolopizo (ἀνασκολοπίζω "impale").

In earlier pre-Roman Greek texts anastauro usually means "impale. Omeopatia: proprietà e composti - GreenStyle. The Gospel Coalition. Concerning hell, C. S. Lewis once wrote, “There is no doctrine which I would more willingly remove from Christianity than this, if it lay in my power.”

Alvin Plantinga. Alvin Carl Plantinga (/ˈplæntɪŋɡə/;[1] born November 15, 1932) is an American analytic philosopher, the John A. O'Brien Professor of Philosophy Emeritus at the University of Notre Dame, and the inaugural holder of the Jellema Chair in Philosophy at Calvin College. Plantinga is widely known for his work in philosophy of religion, epistemology, metaphysics and Christian apologetics. Ask Sam Harris Anything #2. Sam Harris. The Limits of Discourse : As Demonstrated by Sam Harris and Noam Chomsky. (Photo via Axel Naud) For decades, Noam Chomsky has been one of the most prominent critics of U.S. foreign policy, and the further left one travels along the political spectrum, the more one feels his influence. Sam Harris on "Free Will".

A Nuclear Machine That Heats Space, Advanced Trolley Problems. Carl Sagans Cosmos - Episode 1 - The Shores Of The Cosmic Ocean. Part 1 Lower Than The Angels. Stop Googling your health questions. Use these sites instead. Christianity and violence. Christianity has holy texts and traditions that promote violence as well as love, and Christian institutions and individuals have acted violently as well as peacefully.[1] The relationship between Christianity and violence is the subject of controversy because some of its teachings advocate peace, love, and compassion, whereas other teachings have been used to justify violence and hatred.[2][3][4] Definition of violence[edit]

Criticism of the Bible. Creation–evolution controversy. The creation–evolution controversy (also termed the creation vs. evolution debate or the origins debate) involves a recurring cultural, political, and theological dispute about the origins of the Earth, of humanity, and of other life.[1] This debate rages most publicly in the United States of America, but to a lesser extent also proceeds in Europe and elsewhere,[2] often portrayed as part of a culture war.[3] Christian fundamentalists dispute the evidence of common descent of humans and other animals as demonstrated in modern palaeontology, and those who defend the conclusions of modern evolutionary biology, geology, cosmology, and other related fields.

List of transitional fossils. The Prosblogion. The Skeptics’ Guide to the Universe. The Science of Everything Podcast. The Godless Theist. We don't know if God exists, but we should keep asking. Disputes about the existence of God — like most disputes about religion, politics, and sex — almost always generate heat but not light. The question of the existence of God seems intractable.

Dear Believer Why Do You Believe (Normal, 360p).flv. Young Australian Skeptics. Spurious Correlations. Debate Topic: If God does not exist, then everything is permitted. MORNING BREEZE HOMOSEXUALITY DEBATE 18th DEC NBS TV. To Fix Gay Dilemma, Government Should Quit the Marriage Business. The Will to Believe. Daniel Dennett: Breaking the Spell - Religion as a Natural Phenomenon. Abortion and Infanticide: Peter Singer debates Don Marquis. List of fallacies. Paul Dirac. Georges Lemaître. Giosue Carducci Inno a Satana. How Many People Have Ever Lived on Earth? Unione degli Atei e degli Agnostici Razionalisti. Why are believers ignorant about atheists? Wikipedia articles every atheist should know about : atheistgems.