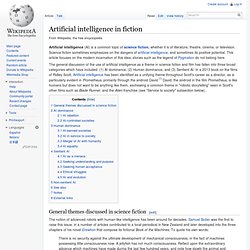 In a 2013 book on the films of Ridley Scott, Artificial intelligence has been identified as a unifying theme throughout Scott's career as a director, as is particularly evident in Prometheus, primarily through the android David.[1] David, the android in the film Prometheus, is like humans but does not want to be anything like them, eschewing a common theme in "robotic storytelling" seen in Scott's other films such as Blade Runner, and the Alien franchise (see "Service to society" subsection below). General themes discussed in science fiction[edit] There is no security against the ultimate development of mechanical consciousness, in the fact of machines possessing little consciousness now. 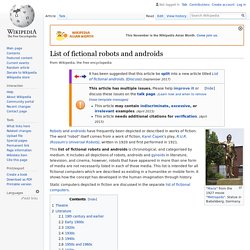 It includes all depictions of robots, androids and gynoids in literature, television, and cinema; however, robots that have appeared in more than one form of media are not necessarily listed in each of those media. This list is intended for all fictional computers which are described as existing in a humanlike or mobile form. It shows how the concept has developed in the human imagination through history. Static computers depicted in fiction are discussed in the separate list of fictional computers. Metropolis (1927) Alien - Le 8ème passager (1979) 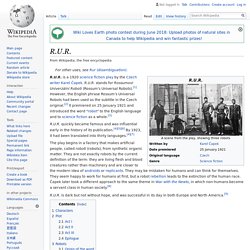