Kingmakers of China’s Internet: Baidu, Alibaba and Tencent. Why we should stop calling Baidu the ‘Google of China’ American Internet companies love flaunting their far-flung research projects: Google has its self-driving cars (among other things), Amazon has its delivery drones, and Facebook has the virtual reality company Oculus Rift. 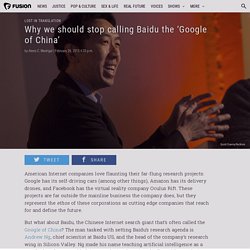 These projects are far outside the mainline business the company does, but they represent the ethos of these corporations as cutting edge companies that reach for and define the future. But what about Baidu, the Chinese Internet search giant that’s often called the Google of China? The man tasked with setting Baidu’s research agenda is Andrew Ng, chief scientist at Baidu US, and the head of the company’s research wing in Silicon Valley. Ng made his name teaching artificial intelligence as a Stanford professor, and helping popularize the suite of influential AI techniques known as deep learning while founding the Google Brain project. I spoke with him earlier this week as part of the Diane L. “That one I don’t have a nice simple answer to,” Ng told me. Baidu Vs. Google: How Are They Different? 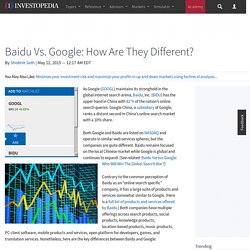 (BIDU Baidu Shs -A- Sponsored American Deposit Receipt Repr 1/10 Sh -A- ) has the upper hand in China with 82 % of the nation’s online search queries. Both Google and Baidu are listed on NASDAQ and operate in similar web services spheres, but the companies are quite different. Baidu Versus Google: Who Will Win The Global Search War? As the internet continues to evolve, so have the web search engines used around the world. 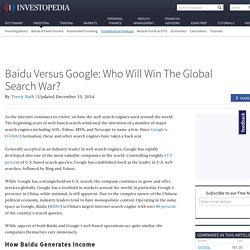 The beginning years of web-based search witnessed the invention of a number of major search engines including AOL, Yahoo, MSN, and Netscape to name a few. Since Google’s (GOOG) formation, these and other search engines have taken a back seat. Generally accepted as an industry leader in web search engines, Google has rapidly developed into one of the most valuable companies in the world.

Controlling roughly 67.5 percent of U.S. based search queries, Google has established itself as the leader in U.S. web searches, followed by Bing and Yahoo. While Google has a stranglehold on U.S. search, the company continues to grow and offer services globally. While aspects of both Baidu and Google’s web based operations are quite similar, the companies themselves vary immensely. 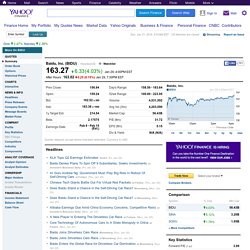 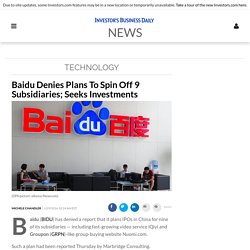 Such a plan had been reported Thursday by Marbridge Consulting. Baidu early Friday told IBD that is not the case. “Baidu denies the accuracy of much of this. We have publicly announced that some of our quality assets, including Baidu Takeout Delivery, 91 Desktop, and Zuoyebang, were opened to outside investment, but this business about nine subsidiaries preparing IPOs domestically is simply incorrect,” Kaiser Kuo, Baidu spokesman, told IBD via email. Subsidiaries identified by Marbridge for spinoff include Baidu’s Takeout Delivery, Baidu Music, Baidu Literature, Baidu’s Film Department, 91 Launcher, mobile homework app Zuoye Bang and the company’s Healthcare Business Division. 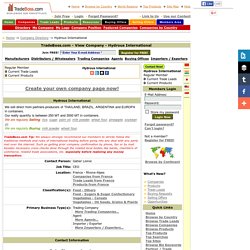