Withings ScanWatch review: The $479 smart watch that measures your medical vital signs. Health is at the centre of every smartwatch on the market in 2020 but none have had medical certification until now. 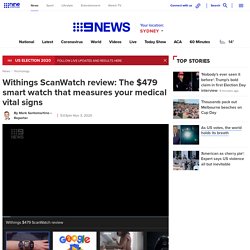 Apple has trials underway but has been beaten to the punch by Withings. The smart health company's new ScanWatch releases in Australia today from $479. Critically it's the only watch in Australia that's been clinically validated and TGA certified to measure blood oxygen saturation and irregularities in heartbeats as an electrocardiogram. Both tests take 30 seconds and can be a little temperamental if you don't have a flush connection between the back of the watch and your wrist. You get the result instantly on the watch's tiny, circular LED screen which then syncs up to Withings' Health Mate smartphone app to track changes over time. Amazfit Might Have Made the Best Budget Smartwatch. Smartwatches under $US200 ($280) keep getting more advanced and more worth your money, but the newly launched Amazfit GTR 2 and GTS 2 could actually pose a threat to the “budget” options from more well-known smartwatch brands. 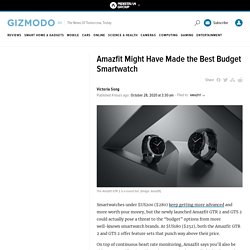 At $US180 ($252), both the Amazfit GTR 2 and GTS 2 offer feature sets that punch way above their price. On top of continuous heart rate monitoring, Amazfit says you’ll also be able to get notifications if your heart rate is abnormally high. The watches will also support on-demand SpO2 readings, stress tracking, and this time around, both watches will also support Amazon Alexa on the wrist. This is on top of your typical smart notifications, an always-on display, sleep tracking, and the ability to take calls over Bluetooth on the wrist. Oh, and both watches have built-in GPS and are safe for swimming with 5ATM of water resistance. Can You Really Get a Premium Smartwatch, On a Budget? You’ll be amazed how affordable this awesome watch is… 12th November 2019 | by Jason Tindall | Advertorial Latest Europe start-up has just launched the flagship smartwatch called eWATCH giving big smartwatch company makers a real run for their money. 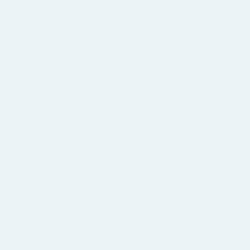 With thousands of customers already convinced, eWATCH is the first flaship smartwatch of the new era costing three times less than the competition. eWATCH is here to satisfy the most demanding smartwatch users. It’s selling like crazy worldwide, we investigate why this little known smartwatch is so popular! Everybody knows the big tech brands are ripping us off. They change very little every year, and yet their watches seem to keep getting more and more expensive…But can you get a top-quality smartwatch, without paying crazy prices?

We investigate why everyone is choosing this particular new smartwatch, instead of overpriced ones like the Apple Watch, for example. The Best Rugged Waterproof Smartwatches of 2018 – MBReviews. The smartwatches are a new breed of gadgets which, similarly to the smartphones, have evolved from the traditional wearable (that could have been mechanical or with a battery, and some were waterproof / water-resistant) to a device more suitable for this century. 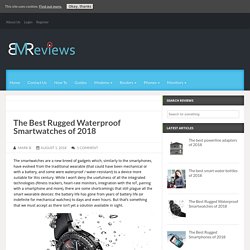 While I won’t deny the usefulness of all the integrated technologies (fitness trackers, heart-rate monitors, integration with the IoT, pairing with a smartphone and more), there are some shortcomings that still plague all the smart wearable devices: the battery life has gone from years of battery life (or indefinite for mechanical watches) to days and even hours. But that’s something that we must accept as there isn’t yet a solution available in sight. UPDATE 08.01.2018: I have added the Garmin Fenix 5 Plus to the best rugged waterproof smart watches list. ALSO CHECK OUT: Samsung Gear S3 Frontier vs Apple Watch 3. Timeless Italian Style Watches - Official Store. LIST: The 10 best independent watches of Baselworld 2018. The dust of Baselworld 2018 has finally settled, and while there was a ton of quick news to hammer through, there are certain topics that require a little more digestion.

Case in point: the world of small independent watchmaking had a lot on offer this year, both outlandish and understated. Having seen and handled innumerable watches during the duration of the fair, sifting through the archives to come to a decision on who led the pack required both patience and a healthy dose of decompression. Of course, there were some obvious frontrunners from the likes of H. Moser, Angelus, and something truly bonkers from Urwerk; however, there were a healthy number of releases both conservative and outlandish from all over this category. The World's First Working Projector Smartwatch Turns Your Arm Into A Big Touchscreen.

Why the Ressence Type 2 e-Crown is the future of watch design. You have to feel sorry for the folk responsible for coming up with new watch designs. 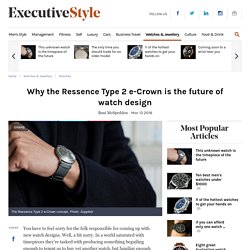 Well, a bit sorry. There's now a smartwatch version of the Australian earpiece which translates nine languages. Designed by the company that made the nine-language earpiece translator.Smartwatch can host multilingual chats with groups of 1000 people.Available to order tomorrow at starting price of $US699. 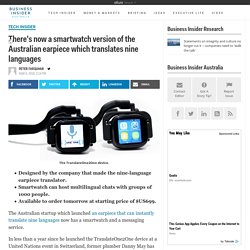 The Australian startup which launched an earpiece that can instantly translate nine languages now has a smartwatch and a messaging service. In less than a year since he launched the TranslateOne2One device at a United Nations event in Switzerland, former plumber Danny May has become an unlikely, but extremely busy, advocate for IBM’s AI technology, Watson. Watson takes 30-second blocks of conversation in English, Japanese, French, Chinese, Italian, Spanish, German, Portuguese and Arabic and returns it to the One2One earpiece coherently in any of those languages.

May began working on the technology five years ago when he struggled to communicate effectively while on a business trip to China. Best hybrid smartwatches 2018: Fossil, Garmin, Nokia and more. KINETIC Android Smart Watch Phone Best Smart Watch On The Planet. The Kinetic Smart Watch Phone is the worlds most advanced personal device. 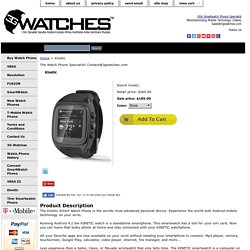 Experience the world with Android mobile technology on your wrist. Running Android 4.2 the KINETIC watch is a standalone smartphone. This smartwatch has a slot for your sim card. Now you can leave that bulky phone at home and stay connected with your KINETIC watchphone. All your favorite apps are now available on your wrist without needing your smartphone to connect. Less expensive then a Seiko, Casio, or Movado wristwatch that only tells time. Type: Watch Phone OS: Android 4.2. This Apple Watch clone has GPS and 45 days of battery life for $99. One of the biggest complaints with smartwatches is the need to recharge them as often as a smartphone. 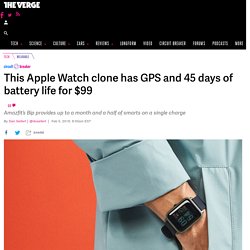 The best smartwatches you can get typically don’t last longer than two days, and most require daily charging. The new Amazfit Bip, which is available in the US starting today, provides up to a promised 45 days of battery life, putting even the venerable Pebble (RIP) to shame. The Bip is not a hybrid watch or a stripped down device, either: it has a 1.28-inch touchscreen display, an optical heart rate sensor, true GPS for location tracking, a 3-axis accelerometer, IP68-rated water resistance, and notification support from both Android and iOS devices.

The company says that the watch can reach 30 days on a single charge, and up to 45 days with “minimal notifications.”