New York Travel. If you had time and money, what are three places in the world that you would visit and why? 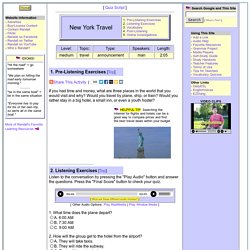 Would you travel by plane, ship, or train? Would you rather stay in a big hotel, a small inn, or even a youth hostel? Listen to the conversation by pressing the "Play Audio" button and answer the questions. Press the "Final Score" button to check your quiz. [ Other Audio Options: Play RealMedia | Play Window Media ] Listen to the conversation again as you read the Quiz Script. What kinds of things do you like to do when you visit a new place for the first time? Imagine that you are going on vacation to New York City, and you have $1,500 to spend on your entire week vacation. Want to Tell People About This Listening Activity? Now, write your ideas on a similar topic at Randall's ESL Blog HERE. Randall's Sites: Daily ESL | ESL Blog | EZSlang | Train Your Accent | Tips For Students | Hiking In Utah. On Time-Lapse Rocket Ride to Trade Center’s Top, Glimpse of Doomed Tower. Continue reading the main story Video An imposingly realistic vision of the old , the ultimately doomed north tower, will begin appearing next month in a most unlikely place: the five special elevators servicing the observatory atop the new 1 World Trade Center. 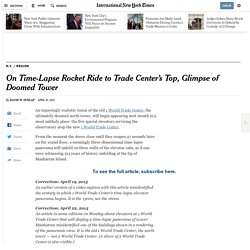 From the moment the doors close until they reopen 47 seconds later on the 102nd floor, a seemingly three-dimensional time-lapse panorama will unfold on three walls of the elevator cabs, as if one were witnessing 515 years of history unfolding at the tip of Manhattan Island. For less than four seconds (roughly proportional to the time the twin towers stood), jarringly familiar pinstripe facades will loom into view on one wall of the cab. Then, in a quick dissolve, they will evanesce. There would have been no way around Sept. 11, 2001, said David W. “The event is certainly a key part of history,” he said.

Mr. “There were strong opinions and emotional reactions all around,” he said. Photo At first, one feels enclosed in bedrock. Matris muntligt prov NP. 6 Documentaries You Can Stream Right Now To Reflect On 9/11. Today marks the 13th anniversary of the Sept. 11 terror attacks. 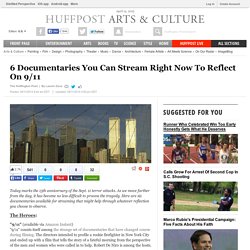 As we move farther from the day, it has become no less difficult to process the tragedy. Here are six documentaries available for streaming that might help through whatever reflection you choose to observe. The Heroes: "9/11" (available via Amazon Instant) "9/11" counts itself among the strange set of documentaries that have changed course during filming. The directors intended to profile a rookie firefighter in New York City and ended up with a film that tells the story of a fateful morning from the perspective of the men and women who were called in to help. "A Good Job"(available via HBOGo) Steve Buscemi's directorial debut is about the work of a firefighter in general, but has a pointed segment regarding the World Trade Center, reverently touching on the culture of the job before and after the attacks. Individual Experiences: Indirect Experiences: Watch Grounded on 9/11 in News | View More Free Videos Online at Veoh.com. Inside The Twin Towers.

9/11 Attacks — History.com Articles, Video, Pictures and Facts. On September 11, 2001, at 8:45 a.m. on a clear Tuesday morning, an American Airlines Boeing 767 loaded with 20,000 gallons of jet fuel crashed into the north tower of the World Trade Center in New York City. 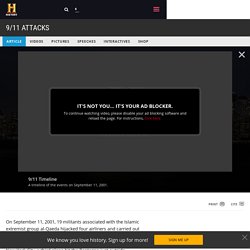 The impact left a gaping, burning hole near the 80th floor of the 110-story skyscraper, instantly killing hundreds of people and trapping hundreds more in higher floors. As the evacuation of the tower and its twin got underway, television cameras broadcasted live images of what initially appeared to be a freak accident. Then, 18 minutes after the first plane hit, a second Boeing 767–United Airlines Flight 175–appeared out of the sky, turned sharply toward the World Trade Center and sliced into the south tower near the 60th floor. BEST 9 11 DOCUMENTARY EVER!(FULL MOVIE) (SD)