An Architect's Tour of Montreal. All photos by Mark Gardner. 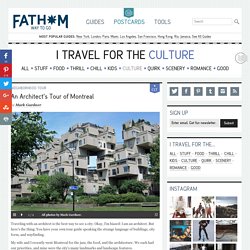 Showing image 1 of 2 Traveling with an architect is the best way to see a city. Okay, I'm biased: I am an architect. But here's the thing: You have your own tour guide speaking the strange language of buildings, city form, and wayfinding. My wife and I recently went Montreal for the jazz, the food, and the architecture. Of course I had to see the beautifully preserved and once-walled Vieux Montreal and the lush city parks, but my most anticipated visit was Habitat 67, a housing complex off the Saint Lawrence River designed by Moshe Safdie, who was at the time a very young architect. Visiting the building required a bike ride through the old city along one of the networked bike paths winding through industrial waterfront canals. Habitat is now private residences, which makes it hard to get a sense of the interiors and how people have converted a concrete structure into warm, inviting homes. MAP IT →See the locations in this story. 5 Old Montreal Buildings with Breathtaking Architecture.

A district always in high demand, Old Montreal is characterized as much by tourists as by its residents and its unique scalable architecture and rich history. 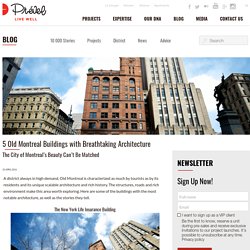 The structures, roads and rich environment make this area worth exploring. Architecture expert comments on Montreal’s buildings. What would an international expert think of Montreal’s recent architecture? 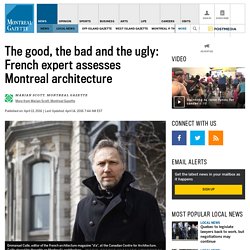 To find out, the Montreal Gazette took French architecture critic Emmanuel Caille on a walking tour of downtown and Griffintown. He also visited the $52.6-million indoor soccer stadium that opened last year in the St-Michel district. Caille, the editor of the Paris-based architecture magazine “d’a”, was in town to take part in a panel discussion last week on architectural criticism, organized by the Maison de l’architecture du Québec and the Royal Architectural Institute of Canada (RAIC). Caille’s verdict on our fair city ranged from a thumbs-up for the pricey new soccer stadium to shocked incredulity over a new hotel annex to the Mount Stephen Club, a historic mansion at 1440 Drummond St. Built from 1880-83 for Lord Mount Stephen, the first president of the Canadian Pacific Railway, it has been in the news recently after suffering structural damage during construction of the annex.

“It’s astonishing. Top Montreal Neighborhoods With Historic Architecture. Montreal is a unique city with an atmosphere that's a mix of old and new. 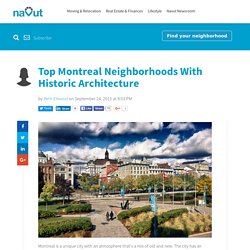 The city has an array of modern buildings that show off a contemporary design, but has also preserved a number of historic structures that are spread out over the city. These old buildings are no secret, but do take some tracking down. We at Navut have narrowed down a selection of Montreal neighborhoods with the most impressive historic architecture. Come take a few steps back in time and discover with us the hidden history of these neighborhoods in Montreal. Old Montreal: Just outside the city centre, this neighborhood is the first stop for anyone looking for a historical venture. Saint-Sulpice Seminary. Architecture and history. Only in Montréal does a simple stroll seem like time travel: you go back in time or leap to the future with every step. 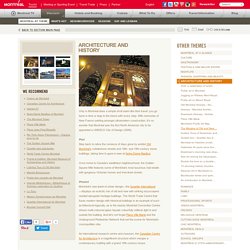 With memories of New France swirling amongst ultramodern construction, it’s no wonder that Montréal was the first North American city to be appointed a UNESCO City of Design (2006). PastStep back to relive the romance of days gone by amidst Old Montréal’s cobblestone streets and 18th- and 19th-century stone buildings, taking time to gaze in awe at Notre-Dame Basilica. Once home to Canada’s wealthiest neighbourhood, the Golden Square Mile features some of Montréal’s most luxurious real estate with gorgeous Victorian homes and tree-lined streets. PresentMontréal’s new jewel of urban design—the Quartier international—displays an eclectic mix of old and new with striking skyscrapers nestled alongside heritage buildings. Architecture of Montreal - Wikipedia. The architecture of Montreal, Quebec, Canada is characterized by the juxtaposition of the old and the new and a wide variety of architectural styles, the legacy of two successive colonizations by the French, the British, and the close presence of modern architecture to the south. 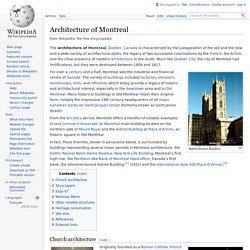 Much like Quebec City, the city of Montreal had fortifications, but they were destroyed between 1804 and 1817. From the Art Deco period, Montreal offers a handful of notable examples. Accueil - Musée des beaux-arts de Montréal. Montreal wiki. Montreal ( i/ˌmʌntriːˈɒl/;[11]), officially Montréal (French pronunciation: [mɔ̃ʁeal]) is the most populous municipality in Quebec and the 2nd-most populous in Canada. 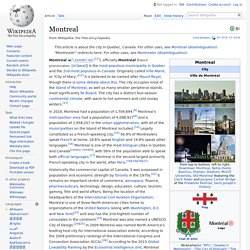 Originally called Ville-Marie, or "City of Mary,"[12] it is believed to be named after Mount Royal, though there is some debate about this. The city occupies most of the Island of Montreal, as well as many smaller peripheral islands, most significantly Île Bizard. The city has a distinct four-season continental climate, with warm to hot summers and cold snowy winters.[13] Historically the commercial capital of Canada, it was surpassed in population and economic strength by Toronto in the 1970s.[22] It remains an important centre of commerce, aerospace, finance, pharmaceuticals, technology, design, education, culture, tourism, gaming, film and world affairs.

Name[edit] In Kanien’kéha, or Mohawk language, the island is called Tiohtià:ke Tsi (a name referring to the Lachine Rapids to the island's southwest) or Ka-wé-no-te.