Check out this article from &apos;The Culture Trip&apos; A Guide To Amsterdam's Most Unusual Attractions. The Best Boutiques In Amsterdam, The Netherlands. History of Amsterdam. Resourceful beginnings When the last millennium was still quite young, a handful of adventurers came floating down the river Amstel in hollowed-out logs. 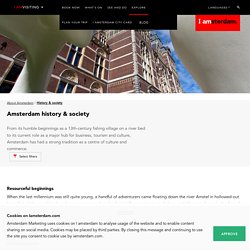 Out of the marshlands and swamps surrounding the Amstel River, a structure of dams and dikes was forged - the first of which is marked by the Dam square at the heart of the city today. Amsterdam society. Amsterdam: melting pot of cultures In short, it's no coincidence that Amsterdam has become one of the most multicultural city in the world. 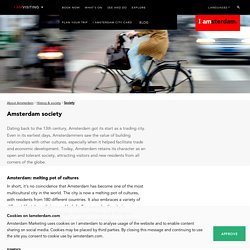 The city is now a melting pot of cultures, with residents from 180 different countries. [Landscape Architecture Study Tour with Professor Jack Ahern. Introduction Amsterdam is called by some the "Venice of the North". 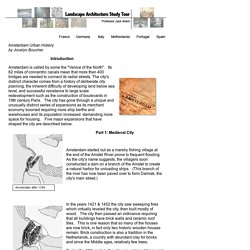 Its 62 miles of concentric canals mean that more than 400 bridges are needed to connect its radial streets. The city's distinct character comes from a history of deliberate city planning, the inherent difficulty of developing land below sea level, and successful resistance to large scale redevelopment such as the construction of boulevards in 19th century Paris. History. Amsterdam » Basic Facts » History Amsterdam Amsterdam, the greatest planned city of northern Europe, has always been a well-known name in world history and played a central role in the history of the Netherlands. 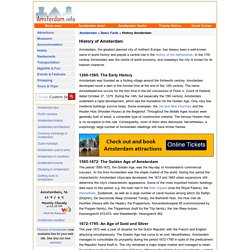 In the 17th century Amsterdam was the centre of world economy, and nowadays the city is known for its tolerant character. Amsterdam - Wikipedia. Amsterdam (/ˈæmstərdæm, ˌæmstərˈdæm/;[9][10] Dutch: [ɑmstərˈdɑm]) is the capital and most populous municipality of the Kingdom of the Netherlands. 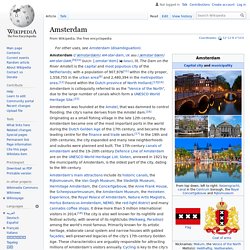 Its status as the capital is mandated by the Constitution of the Netherlands,[11] although it is not the seat of the government, which is The Hague.[12] Amsterdam has a population of 847,176 within the city proper, 1,343,647 in the urban area,[13] and 2,431,000 in the Amsterdam metropolitan area.[8] The city is located in the province of North Holland in the west of the country. The metropolitan area comprises much of the northern part of the Randstad, one of the larger conurbations in Europe, with a population of approximately 7 million.[14] Amsterdam's name derives from Amstelredamme,[15] indicative of the city's origin around a dam in the river Amstel. Famous Amsterdam residents include Anne Frank the diarist, artists Rembrandt van Rijn and Vincent van Gogh, and philosopher Baruch Spinoza.

Etymology[edit] History of Amsterdam - Wikipedia. Amsterdam circa 1544, before the semi-circular ring of canals was added. 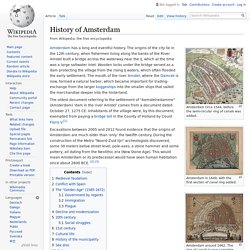 Amsterdam in 1649, with the first section of canal ring added. Amsterdam around 1662. The ring of canals is now complete. Netherlands - Wikipedia. The Netherlands ( i/ˈnɛðərləndz/; Dutch: Nederland [ˈneːdərˌlɑnt]; Frisian: Nederlân) is the main constituent country of the Kingdom of the Netherlands. 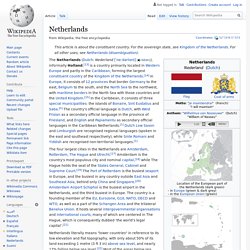 It is a densely populated country located in Western Europe with three island territories in the Caribbean. [nb 1] The European part of the Netherlands borders Germany to the east, Belgium to the south, and the North Sea to the northwest, sharing maritime borders with Belgium, the United Kingdom, and Germany.[9] The three largest cities in the Netherlands are Amsterdam, Rotterdam and The Hague. Amsterdam is the country's capital,[10] while The Hague holds the Dutch seat of parliament and government.[11] The port of Rotterdam is the world's largest port outside East-Asia, and by far the largest port in Europe.[12] The name Holland is used informally to refer to the whole of the country of the Netherlands.