The iOS Design Guidelines - Ivo Mynttinen / User Interface Designer. Adventures in UX. Best workflow for icon design: Start big, or start small. A slight correction to your assumptions: While Windows and Mac do use multiples of 16, they don't scale at the same rate. 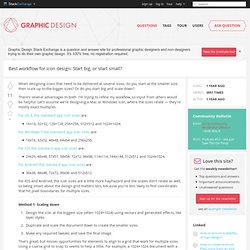 Vista/7 standard sizes are 162, 322, 482, 2562. OS X is 162, 322, 1282, 5122 (+HiDPI versions). To further complicate things, Windows Vista/7 default zoom levels seem to be 162, 482, 962, 2562 and will happily scale in increments as small as 2px. This shouldn't make a huge difference to your workflow except that it obviates the need to be concerned with specific pixel grids at all zoom levels. My workflow is different than yours in that I don't do very much resizing. The size that I begin with is determined by the platform. The fully finished icon gets done at this size and is the reference for other icons in the family.

The 256x version will be a wholly new creation. The 16x version is also a new creation. So, for me at least, it's not a matter of scaling up or down in the hopes of having an identical image or using the same base layout at all sizes. Functional Animation In UX Design. Editor’s Note: This article contains many video examples that show functional animation. 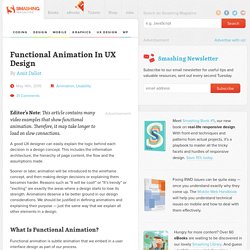 Therefore, it may take longer to load on slow connections. A good UX designer can easily explain the logic behind each decision in a design concept. This includes the information architecture, the hierarchy of page content, the flow and the assumptions made. Sooner or later, animation will be introduced to the wireframe concept, and then making design decisions or explaining them becomes harder. Reasons such as “It will be cool!” What Is Functional Animation? Functional animation is subtle animation that we embed in a user interface design as part of our process. Unlike animation made by Disney Studios or animation made for computer games, functional animation has a clear, logical purpose. In a perfect world, we should be able to validate functional animation against a well-defined set of logical purposes. Orientation Direction illuminates structure. Example Videos Same Location, New Action. Meaningful Transitions // Home. 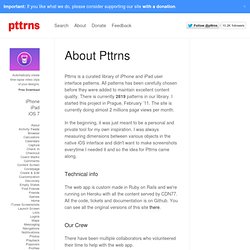 All patterns has been carefully chosen before they were added to maintain excellent content quality. There is currently 2819 patterns in our library. I started this project in Prague, February ’11. The site is currently doing almost 2 millions page views per month. In the beginning, it was just meant to be a personal and private tool for my own inspiration. Technical info The web app is custom made in Ruby on Rails and we're running on Heroku with all the content served by CDN77. Our Crew There have been multiple collaborators who volunteered their time to help with the web app. Robin Raszka — Site design and all content Roman Sklenar — Current lead developer Jan Sedivy — Second version of the site Honza Cerny — Created the original MVP Submission We get tons of requests every day and I try to review all of them.

Design - Helpshift for iOS. This documentation applies to Helpshift SDK 4.x for iOS. 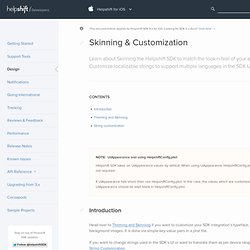 If you want to change strings used in the SDK’s UI or want to translate them as per device language, see String Customization. Theming and Skinning To skin your app, make sure you add HSThemes/HelpshiftConfig.plist into your XCode project and set values for attributes in HelpshiftConfig.plist Colors. How and When to Design an App Walkthrough. A walkthrough is the process of intentionally revealing functionality to a user. 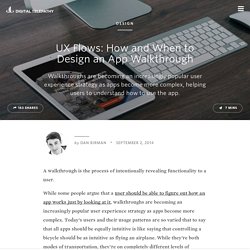 While some people argue that a user should be able to figure out how an app works just by looking at it, walkthroughs are becoming an increasingly popular user experience strategy as apps become more complex. Today’s users and their usage patterns are so varied that to say that all apps should be equally intuitive is like saying that controlling a bicycle should be as intuitive as flying an airplane. While they’re both modes of transportation, they’re on completely different levels of complexity. Therefore, designers must always keep intended users and usage patterns at the top of their minds when deciding if and how to implement a walkthrough. It is a constant struggle to balance functionality with ease of use, which is why walkthroughs can be incredibly useful – especially when implemented with care and precision. Integrated Content Generally, the more integrated a walkthrough is within an app, the better.