3 Star Trek TV Spinoffs Reportedly In The Works For Paramount+ X Star Trek: Discovery Season 4 Announcement Video Star Trek: Discovery will return for season 4. 00:00 of 00:55Volume 0% Press shift question mark to access a list of keyboard shortcuts Play/PauseSPACE Increase Volume↑ Decrease Volume↓ Seek Forward→ Seek Backward← Captions On/Offc Fullscreen/Exit Fullscreenf Mute/Unmutem Seek %0-9 Star Trek: Picard Official Trailer #2 Paramount might be dragging their heels when it comes to deciding on how to proceed with Star Trek on the big screen, but they’re more than happy to have executive producer Alex Kurtzman map out the future of the franchise’s small screen adventures until at least 2027, with the beloved sci-fi series now a larger presence on television than it’s been for a very long time. 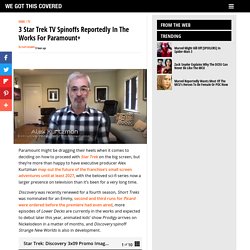 That’s an awful lot of Star Trek content on the horizon, but insider Daniel Richtman has claimed that there’s even more to come after reporting that a further three spinoffs are coming to CBS All Access’ impending rebrand as Paramount+. How Star Trek: Discovery's Guardian of Forever Twist Sets Up Section 31. How Star Trek: Discovery connects to “The City on the Edge of Forever” By the end of “Terra Firma Part 2,” we learn two things: First, Mirror Georgiou’s time in the Prime Universe has made her way nicer than she lets on. 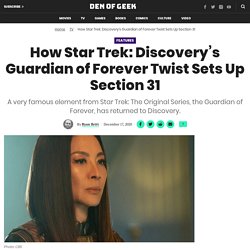 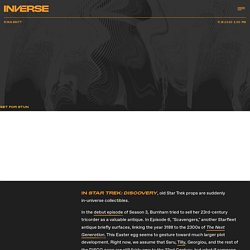 In the debut episode of Season 3, Burnham tried to sell her 23rd-century tricorder as a valuable antique. In Episode 6, "Scavengers," another Starfleet antique briefly surfaces, linking the year 3188 to the 2300s of The Next Generation. This Easter egg seems to gesture toward much larger plot development. Right now, we assume that Saru, Tilly, Georgiou, and the rest of the DISCO gang are still fairly new to the 32nd Century, but what if someone else — who isn't Burnham — has a bunch of information about the 24th and 25th century?

'Star Trek: Discovery' Voyager Easter egg just changed series canon. How did that get there? 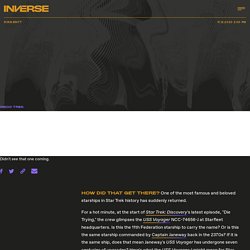 One of the most famous and beloved starships in Star Trek history has suddenly returned. For a hot minute, at the start of Star Trek: Discovery's latest episode, "Die Trying," the crew glimpses the USS Voyager NCC-74656-J at Starfleet headquarters. Is this the 11th Federation starship to carry the name? Or is this the same starship commanded by Captain Janeway back in the 2370s? If it is the same ship, does that mean Janeway's USS Voyager has undergone seven centuries of upgrades? Spoilers ahead for Discovery Season 3, Episode 5, "Die Trying. " After hitting up Earth and realizing Starfleet and the Federation no longer lived there, the crew of the USS Discovery obtained an algorithm from Adira Tal, based on the memories of their former Trill host, the Starfleet Admiral Senna Tal.

When Star Trek Discovery is set. Exactly where Star Trek: Discovery fits into the Star Trek timeline has always been a little confusing, with the streaming drama functioning as a prequel to the original 1966 series despite featuring far more up-to-date visuals, technology and general style. 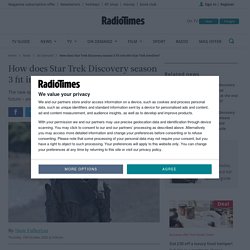 However, as of the season two finale Discovery has now turned from prequel to sequel, with Sonequa Martin-Green’s Michael Burnham and her crew catapulted through time to the 32nd century, where no Star Trek series has gone before. Check out our Star Trek Discovery season 2 recap here if you need a quick refresher about exactly how this all happened. But where exactly does this new Discovery fit in with the former series?

Well, it’s fairly simple. You need to watch the most underrated sci-fi sequel on Amazon Prime ASAP. Perhaps the most amazing thing about 1982’s Star Trek: The Wrath of Khan is that the movie’s director, Nicholas Meyer, had never seen an episode of the original series or even heard of the characters. 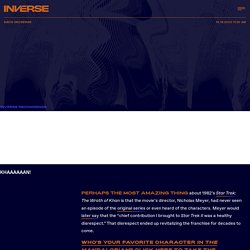 Meyer would later say that the “chief contribution I brought to Star Trek II was a healthy disrespect.” That disrespect ended up revitalizing the franchise for decades to come. Who's your favorite character in The Mandalorian? Click here to take the ultimate Mando survey now! Meyer was brought in after a series of creative dead-ends. The plot eventually began to coalesce around an old enemy — Khan Noonien Singh, a genetically engineered human who appeared in a single episode of the 1960s series who had once run an empire on Earth in the 20th century.

Despite memorable performances all around from the Enterprise bridge crew, Ricardo Montalban truly steals the show as Khan. This is where Meyer’s disrespect comes into action. The Future Of Star Trek On TV Is Mapped Out Until 2027. X Star Trek: Discovery Season 3 Official Trailer Check out the official trailer for Star Trek: Discovery season 3. 00:00 of 02:12Volume 0% Press shift question mark to access a list of keyboard shortcuts Play/PauseSPACE Increase Volume↑ Decrease Volume↓ Seek Forward→ Seek Backward← Captions On/Offc. 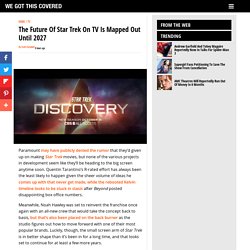 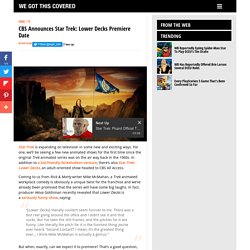 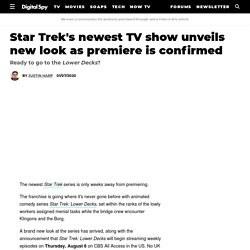 The franchise is going where it's never gone before with animated comedy series Star Trek: Lower Decks, set within the ranks of the lowly workers assigned menial tasks while the bridge crew encounter Klingons and the Borg. A brand new look at the series has arrived, along with the announcement that Star Trek: Lower Decks will begin streaming weekly episodes on Thursday, August 6 on CBS All Access in the US. No UK home has been set yet. This teaser photo below offers a sneak peek at the USS Cerritos Lower Deck's ensigns Beckett Mariner (Tawny Newsome) and Rutherford (Eugene Cordero) and Captain Carol Freeman (Dawnn Lewis), among others. Is The Star Trek Franchise Returning To The Original Series Format? So, don’t get me wrong. 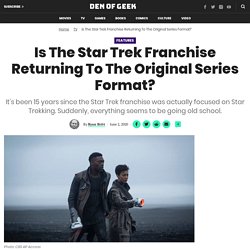 Star Trek is not broken. It is, however, different than it was in the heydays of the ‘90s. In some senses, Picard and Discovery have answered the question: “What if all Star Trek was like Deep Space Nine?” Which is to say: what if the shows were more about using the Star Trek ethos to explore stories of self-discovery and self-exploration?

That said, there hasn’t been a lot of new space explored. In the season 2 finale of Discovery — “Such Sweet Sorrow Part 2” — the ship jumps 930 years into the future. Interestingly, the season 1 finale of Picard is similar, at least, thematically. And then, of course, there’s Strange New Worlds, the unexpected in-development prequel series set aboard the USS Enterprise NCC-1701 under the command of Captain Christopher Pike. From the Abrams-produced films, to Discovery, to Picard, the Star Trek of the 21st century seems to have strongly acknowledged that the stories of this hopeful future have to earn that hopefulness. CBS Reportedly Planning A Defenders-Style Star Trek Crossover Show.

X Star Trek: Picard "A New Chapter Begins" Promo Check out this new promo for Star Trek: Picard. Volume 0% Press shift question mark to access a list of keyboard shortcuts Play/PauseSPACE Increase Volume↑ Decrease Volume↓ Seek Forward→ Star Trek: Picard Showrunner Pitched a Seven of Nine Spin-Off Series With Elnor. There is little doubt that the return of Seven of Nine is one of the most exciting things about Star Trek: Picard. But is it possible that we'll see more of Jeri Ryan's Star Trek: Voyager character in the future? Showrunner Michael Chabon has just admitted that he pitched a spin-off series that would focus on Seven as well as new character Elnor. Chabon shared the idea when a fan reached out to him on his official Instagram account with a pitch (via Comicbook.com).

The series has been nothing but a success for CBS All Access, winning the favour of critics who enjoy how the show provides fans with a slower, serialized story that tackles timely themes pushing the envelope of the franchise. Speaking in an interview with PLAYBOY, Stewart not only talks about the success of Picard but the entire Star Trek franchise. While the original Star Trek series only lasted for three seasons, the franchise has given birth to quite a number of films, books, and TV series, including the successful Picard. According to Stewart, the reason why the Star Trek franchise remains so strong and relevant is because of its social commentary. It offers fans a connection between the past and present. Star Trek: Picard Will Not Bring Back Two Major Next Generation Stars in Season 1. Star Trek: Picard first episode Twitter reactions. After waiting for nearly two decades, Jen-Luc Picard is finally back in our lives!

Read up on your crew before you embark on #Picard □ Jeri Ryan: Why Seven of Nine Blames Picard - IGN. With Star Trek: Picard's debut coming on Thursday, January 23, actress Jeri Ryan has offered some insight on where her character Seven of Nine has been since we last saw her on Star Trek: Voyager in 2001, as well as her surprising feelings about Patrick Stewart's legendary Admiral Jean-Luc Picard.In an interview with IGN, Ryan explained that dark times have overtaken the galaxy, and Seven has seen a lot of "dark crap" in the last 20 years.

Watch the full interview above or read on for excerpts from it. "Seven I think holds Starfleet and the Federation in large part responsible for much of it," she said. 'Star Trek: Picard' Renewed for Season 2 at CBS All Access. Intl.startrek. It’s almost time to rejoin one of Starfleet’s most beloved captains, Jean-Luc Picard. ViacomCBS CEO Mentions Two New Star Trek Films in Post-Merger Address. The reunification of Star Trek movie and TV rights, as well as the production of not one, but two new Star Trek movies, are just part of plans for the recently reformed ViacomCBS, according to its CEO. Bob Bakish spoke at a technology conference in New York earlier this week, where he remarked on the growth and potential investors could expect going forward under the recently reborn ViacomCBS name. Bakish said the company will position itself as possibly the “most important [content] dealer in the world,” adding that it will bundle shows and movies to distributors. ‘Star Trek’: Noah Hawley to Write and Direct Next Film.

“Fargo” and “Legion” creator Noah Hawley has been tapped to write and direct the next installment of the “Star Trek” franchise, sources tell Variety. Though plot details are being kept under wraps, sources tell Variety the next “Star Trek” is expected to see Chris Pine, Zachary Quinto, Karl Urban and Zoe Saldana returning to man the U.S.S. Quentin Tarantino's Star Trek Movie Will Be "Pulp Fiction In Space" Quentin Tarantino had been reportedly attached to a Star Trek movie for some time, but until recently he had not commented on the rumors that he might direct it. Star Trek: Picard producer reveals 7 new details about series   Everything You Need to Know for SDCC 2019.

Star Trek reveals new teaser Picard spin-off with Patrick Stewart. Quentin Tarantino Confirms His Star Trek Movie Will Be Rated R. Star Trek: Picard Is Official Title of Spinoff, First Image Revealed. Animated ‘Star Trek’ Series Greenlit at Nickelodeon. An animated “Star Trek” series has officially been given the greenlight by CBS Television Studios and Nickelodeon, Variety has learned. The new CG-animated series will follow a group of lawless teens who discover a derelict Starfleet ship and use it to search for adventure, meaning and salvation. As Variety previously reported, the series hails from Kevin and Dan Hageman, the pair behind “Trollhunters” and “Ninjago: Masters of Spinjitzu,” as well as Eye Animation Productions (CBS’ new animation arm), Secret Hideout, and Roddenberry Entertainment.