LEGO Have Announced A Friends Set & We Cannot Wait! MOC. Lego Design. Dad painstakingly builds 4.7m Lego model of Forth Bridge in epic four-month project - Edinburgh Live. A Scottish civil engineer has just completed his most ambitious project yet - a giant Lego model of the Forth Bridge which measures 4.7m long. 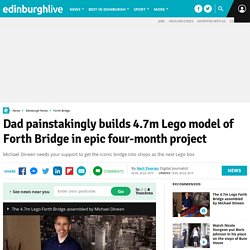 The huge scale model took Michael Dineen four months to design and build, going to extraordinary lengths to get the details exactly right. He now hopes Lego will chose his design for a future box set and is asking for fans of the iconic bridge to vote for his creation in an online forum. Michael, 41, lives in East Renfrewshire and worked in South Queensferry for two years. LEGO Debuts First Stranger Things Playset. LEGO Star Wars BOOST Droid Commander launces this fall. Now that May the 4th is officially here, LEGO is celebrating Star Wars day with the release of its latest kit from a galaxy far, far away. 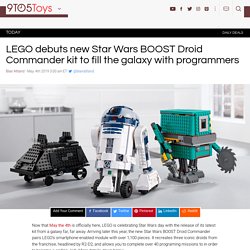 Arriving later this year, the new Star Wars BOOST Droid Commander pairs LEGO’s smartphone-enabled module with over 1,100 pieces. It recreates three iconic droids from the franchise, headlined by R2-D2, and allows you to complete over 40 programing missions to in order to become a coding Jedi. More details down below.

Getting to the pressing matter at hand. How could LEGO celebrate May the Fourth? Site Statistics There are in the Brickset database.Brickset members have written . have logged in in the last 24 hours, in the last 7 days, in the last month. have joined this week. 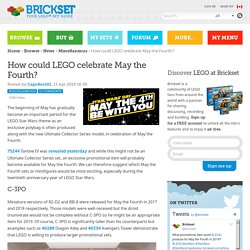 There are now .Between us we own worth at least and containing . Get in touch. How to Build your Dragon: Make your own LEGO Toothless [Instructions] LEGO reveals Disney Collectible Minifigures Series 2 [News] LEGO has revealed the full line-up from the much-anticipated second Disney Collectible Minifigures series, including characters from Frozen, Hercules, Aladdin, Nightmare Before Christmas and more. 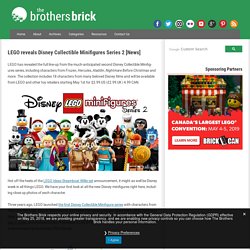 The collection includes 18 characters from many beloved Disney films and will be available from LEGO and other toy retailers starting May 1st for $3.99 US | £2.99 UK | 4.99 CAN. Hot off the heels of the LEGO Ideas Steamboat Willie set announcement, it might as well be Disney week in all things LEGO. We have your first look at all the new Disney minifigures right here, including close up photos of each character. Three years ago, LEGO launched the first Disney Collectible Minifigure series with characters from The Little Mermaid, Alice in Wonderland, and Peter Pan among others. Since then, LEGO fans have been able to collect even more Disney minifigures from 71040 Disney Castle, the Juniors Incredibles 2 series, and multiple Disney Princesses in LEGO Friends form. Nothing says adventure like this rig. LEGO and Disney to release Mickey Mouse in Steamboat Willie as a LEGO Ideas set. Mickey Mouse is returning to the brick in the next Disney inspired LEGO Ideas set, Steamboat Willie. 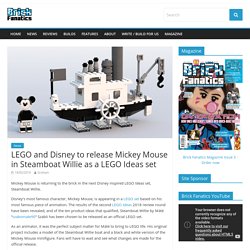 Disney’s most famous character, Mickey Mouse, is appearing in a LEGO set based on his most famous piece of animation. The results of the second LEGO Ideas 2018 review round have been revealed, and of the ten product ideas that qualified, Steamboat Willie by Máté “szabomate90” Szabó has been chosen to be released as an official LEGO set. As an animator, it was the perfect subject matter for Máté to bring to LEGO life. LEGO wins four Toy of the Year (TOTY) awards at the 2019 New York Toy Fair [News] Go Beyond The Hidden Side This Summer. Regular readers will know I have a soft spot for what is unofficially known as ‘in/out’ themes. 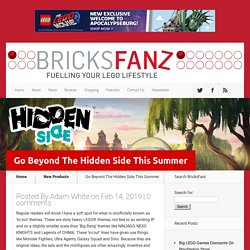 These are story heavy LEGO® themes, not tied to an existing IP and on a slightly smaller scale than ‘Big Bang’ themes like NINJAGO, NEXO KNIGHTS and Legends of CHIMA. These ‘in/out’ lines have given use things like Monster Fighters, Ultra Agents, Galaxy Squad and Dino. Because they are original ideas, the sets and the minifigures are often amazingly inventive and filled with play features. It’s been a while since the last original story theme, with the focus being more on licensed sets. But the Hidden Side not only introduces a new and original world to build, it also incorporates AR technology.

A fairwell from Mr. Narwhal. A classic crew of BrickHeadz, off to see the Wizard. I have to be honest, I’m not exactly sure what the latest craze with The Wizard of Oz is all about, with the characters even showing up in The LEGO Movie 2 and its latest minifigure line! 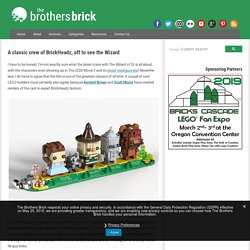 Nevertheless, I do have to agree that the film is one of the greatest classics of all time. A couple of cool LEGO builders must certainly also agree, because Kendall Brown and Scott Moore have created renders of the cast in expert BrickHeadz fashion. Each of the classic characters have all the traits that make them memorable. Dorothy is easily recognizable with her ruby slippers and faithful companion, Toto. Something seems slightly off about Dorothy’s hair, but all the same, they come together nicely. Using grates and clips to give Scarecrow the look of being made out of straw is a clever idea. The Tin Man is one of my favorite characters. As an animal lover and someone with a huge mane of hair myself, I’m definitely a fan of the Cowardly Lion. Altogether it is a really nicely done model.

AR-31 Swordfish cuts though air and enemies alike. No stranger to building wonderful and totally imaginative aircraft, Jon Hall brings us a gull-wing fighter plane that looks like a cross between a Corsair from World War II and a Star Wars TIE fighter. 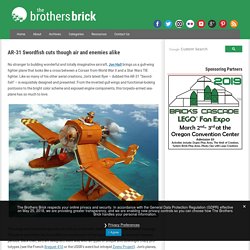 Like so many of his other aerial creations, Jon’s latest flyer – dubbed the AR-31 “Swordfish” – is exquisitely designed and presented. From the inverted gull wings and functional-looking pontoons to the bright color scheme and exposed engine components, this torpedo-armed seaplane has so much to love. The wings and twin boom give the aircraft an undeniably sleek look, despite the bulbous fuselage. How The LEGO Movie 2 made its world bigger (and more awesome) than ever before. The first LEGO Movie ends on a world-shattering revelation: That this whole movie has taken place inside a kid's imagination and that the villain, Lord Business, voiced by Will Ferrell, was actually just a stand-in for the boy's stick-in-the-mud dad, also played by Will Ferrell. 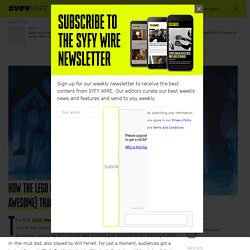 For just a moment, audiences got a look at Emmett (Chris Pratt), Wyldstyle (Elizabeth Banks), and friends in all their frozen LEGO glory — they were but tiny mini figures in a massive display of static LEGO. Emmett gets one valiant, hard-earned flop in the real world but, otherwise, the LEGO action is confined to the boy's imagination. **SPOILER WARNING: This story contains spoilers for The LEGO Movie 2: The Second Part. . ** You know my methods Watson. Series 62 Cadillac: building an American classic. My multicolored LEGO UCS Millennium Falcon.

Mini-Ecto is here to deal with all of your mini-ghosts. First eight finalists of LEGO and BrickLink's AFOL Designer Program revealed [News] Back in September, LEGO launched a new initiative in cooperation with BrickLink called the AFOL Designer Program where fans could submit custom designs with the possibility of being produced and sold by BrickLink. 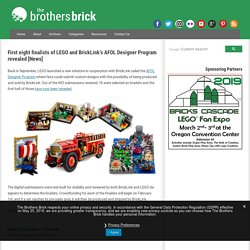 Out of the 443 submissions received, 16 were selected as finalists and the first half of those have now been revealed. The digital submissions were test-built for stability and reviewed by both BrickLink and LEGO designers to determine the finalists. Crowdfunding for each of the finalists will begin on February 1st, and if a set reaches its pre-sales goal, it will then be produced and shipped by BrickLink. Without further adieu, let’s take a look at the first eight finalists. Buy and sell LEGO Parts, Sets and Minifigures. The perfect LEGO Friends kitchen. The face that launched a thousand memes.

LEGO version of James Bond's submersible Lotus Esprit. Brickset. All aboard the tiniest Hogwarts Express. Advent Calendars and 21047 Las Vegas now available. Site Statistics There are in the Brickset database.Brickset members have written . have logged in in the last 24 hours, in the last 7 days, in the last month. have joined this week. There are now .Between us we own worth at least and containing . Get in touch If you have LEGO news, new images or something else to tell us about, send us a message. If you have a lot to tell us, use this contact form. Arms of the New Colossus. IKEA announces collaboration with LEGO.