Martin Lewis' warning to shoppers who pay with cash in supermarkets. Money Saving Expert Martin Lewis has warned shoppers that shops are well within their rights to allow card payments only - and has said that they are not breaking the law by refusing to accept cash. 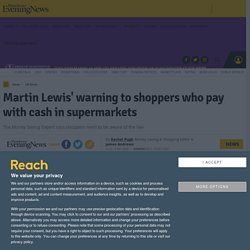 The question arose on ITV's the Martin Lewis Money Show, where one person asked: "If cash is legal tender, are businesses breaking rules by only accepting cards. " Martin's answer was simple, the Mirror reports. "No, they are not breaking any rules," he said. "You are allowed to take card only as long as it's not discriminatory for race or disability or something.

" But that brought up the question of what, exactly, legal tender was. "The legal tender thing is interesting," Martin said. "Legal tender has a strict definitiioon. "It means if you have a court awarded debt against you, if someone tries to settle and they're paying in legal tender you cannot refuse it. "And that's all it means. " He pointed out that in some parts of the country, the only thing that's legal tender is, in fact, coins.

Play now. Legally write off up to 80% of your debt with government approved IVA solution. Calculate the value of $1,000,000 in 1970. How much is it worth today? West Lothian Credit Union. Save as little or as much as you like either weekly, fortnightly or monthly. 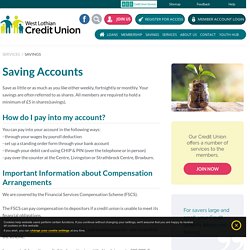 Your savings are often referred to as shares. All members are required to hold a minimum of £5 in shares(savings). How do I pay into my account? You can pay into your account in the following ways: - through your wages by payroll deduction - set up a standing order form through your bank account- through your debit card using CHIP & PIN (over the telephone or in person)- pay over the counter at the Centre, Livingston or Strathbrock Centre, Broxburn. Important Information about Compensation Arrangements. Free cash machines vanishing at alarming rate, says Which? Image copyright Getty Images Free-to-use cash machines have been disappearing at a rapid rate across the UK, according to a study by Which? 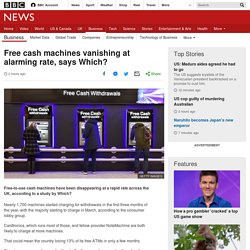 Nearly 1,700 machines started charging for withdrawals in the first three months of the year, with the majority starting to charge in March, according to the consumer lobby group. Cardtronics, which runs most of those, and fellow provider NoteMachine are both likely to charge at more machines. That could mean the country losing 13% of its free ATMs in only a few months. The closures come after a reduction in the fee operators receive from banks each time an ATM is used. Link, which oversees ATMs, began to cut the fee, known as the interchange rate, last year. Banks vs. Building Societies: Which Are Safer? If you're concerned about the safety of your savings, you've probably still got some questions that need answering. 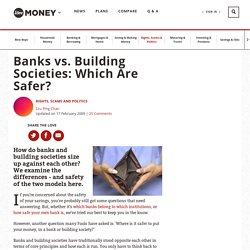 But, whether it's which banks belong to which institutions, or how safe your own bank is, we've tried our best to keep you in the know. However, another question many Fools have asked is: 'Where is it safer to put your money, in a bank or building society? ' Banks and building societies have traditionally stood opposite each other in terms of core principles and how each is run. Welcome to the hub of all hubs: Cosmos has launched. NatWest and RBS trial new fingerprint bank cards. NatWest and the Royal Bank of Scotland have announced plans to trial new biometric bank cards that will allow cardholders to make larger contactless payments. 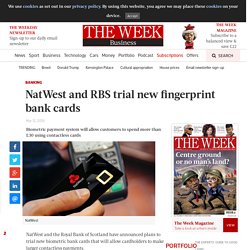 The bank cards will use fingerprint technology to verify transactions above the £30 contactless limit without the need for a PIN number. The nationwide pilot project, the first of its kind in the UK, is due to begin in the coming weeks and will involve 200 NatWest and RBS customers. The banks said the new cards would increase security and make paying at tills easier for customers. “This is the biggest development in card technology in recent years and we are excited to trial the service,” said David Crawford, head of effortless payments at NatWest. The biometric technology, which has already been trialled in Cyprus and Italy, was developed by the Dutch company, Gemalto. “Cardholders can pay quickly and easily with just a simple touch, and they no longer need to worry about the limit on contactless payment transactions,” he added.

Scots could struggle to access cash with bank and ATM closures. Scots have been warned they could be left facing an "uphill battle'' to access their cash following an "alarming'' number of bank and cash machine closures. 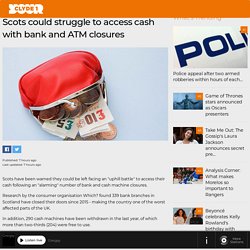 Research by the consumer organisation Which? Found 339 bank branches in Scotland have closed their doors since 2015 - making the country one of the worst affected parts of the UK. In addition, 290 cash machines have been withdrawn in the last year, of which more than two-thirds (204) were free to use. Which? Is now calling on the UK Government to appoint a regulator to protect access to cash. Jenni Allen, managing director of Which? While consumers are increasingly using contactless technology, Ms Allen argued cash was still a "vital backup as fallible digital payments grow in popularity''.

In Scotland, withdrawals from cash machines were down just 3.3% in 2017-18 compared to larger drops of 8.5% and 7.7% in London and the south east of England respectively. How will I know I've won? All Your Cards in One. Beautiful Business & Accounting Software. Legacy banks are fighting back against the Monzo insurrection.