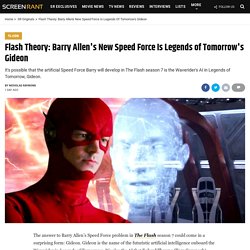 Gideon is the name of the futuristic artificial intelligence onboard the Waverider in Legends of Tomorrow. It’s also the AI that Eobard Thawne (Tom Cavanagh) relied on in The Flash season 1. In the present day, it can be accessed by Barry (Grant Gustin) and his friends through the Reverse-Flash’s once-secret Time Vault at S.T.A.R. Labs. Erica Durance To Reprise ‘Smallville’ Lois Lane Role In Arrowverse Crossover On the CW. 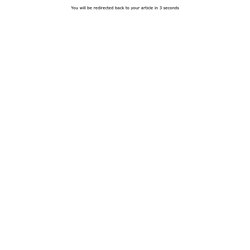 She will be reprising her role as Lois Lane in multiple episodes of the five-night event. The crossover will reveal where Weeling’s Clark Kent and Durance’s Lois Lane characters are almost 10 years after Smallville. While the “Crisis on Infinite Earths” crossover will feature multiple versions of Clark Kent/Superman in different time frames, played by Welling, Tyler Hoechlin and Brandon Routh, I hear there are no plans for multiple incarnations of Lois Lane played by actresses who had previously portrayed her, like Teri Hatcher. As Arrow co-creator/executive producer Marc Guggenheim hinted in the Welling casting announcement, the crossover will be paying homage to Smallville.

“For eight years, Arrow has stood on the shoulders of Smallville. Like Hoechlin and Routh, Durance already is a member of the Arrowverse — she recurred as Alura Zor-El on Supergirl. ‘Crisis on Infinite Earths’: John Wesley Shipp to Return for The CW Crossover Event. The CW is confirming exclusively to TV Insider that John Wesley Shipp, who played Barry Allen on the original The Flash series in 1990-91 on CBS, will be appearing in the upcoming five-part Crisis on Infinite Earths Arrowverse crossover, which begins this December on The CW. 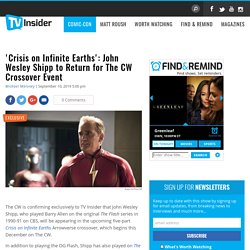 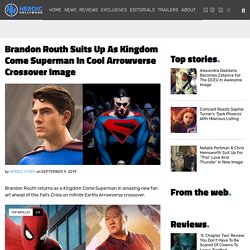 Brandon Routh has been apart of the Arrowverse since 2014, starring as Ray Palmer/ The Atom. Brandon Routh later moved onto Legends of Tomorrow, but it was revealed last month that Brandon Routh will now be exiting as a series regular. However, it was announced at San Diego Comic-Con that the Arrowverse star will return as a Kingdom Come Superman in the upcoming Crisis on Infinite Earths crossover. Of course, Brandon Routh is best known for starring as the Man of Steel in Bryan Singer’s Superman Returns. With Brandon Routh returning to the iconic Superman role as a version inspired by Kingdom Come, new art has been created to show us what that might look like ahead of the official reveal: Are you excited to see Brandon Routh return as a Kingdom Come Superman? Source: Instagram. Arrow is getting another spin-off, but there is a twist.

Fans mourning the impending loss of Arrow after its eighth season will be happy to hear that the character still has more adventures to come. 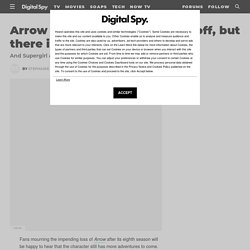 Serial Box, the company which is also behind the Orphan Black audio sequel series, is developing a new series based on the Arrowverse, involving Arrow, The Flash and Supergirl. The CW We earn a commission for products purchased through some links in this article. Did Tom Welling Just Confirm His Return as Superman in Crisis on Infinite Earths? The DC Comics TV series on The CW are preparing for the biggest crossover in television history as Crisis on Infinite Earths is about to take place across all of the flagship shows. 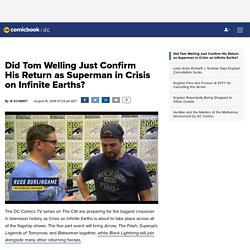 The five part event will bring Arrow, The Flash, Supergirl, Legends of Tomorrow, and Batwoman together, while Black Lightning will join alongside many other returning heroes. But fans have wondered about another former WB superhero series joining the fray in Tom Welling, who previously played Clark Kent in his journey toward becoming Superman in the popular series Smallville. Well, the actor might have just teased his involvement in The CW's crossover in his latest post on social media. While this might seem like an innocuous post, one commenter posted "I hope you're in Crisis on Infinite Earth's" and Welling responded "duh!!!

" Of course, this riled everyone up on his page, with many people taking it to mean "of course I'm in the crossover DUH three exclamation points. " Arrow "Spartan" Photos Feature A Green Lantern Easter Egg. The Arrow episode “Spartan” airs April 22 on The CW, and the network has just released some official photos to promote it. 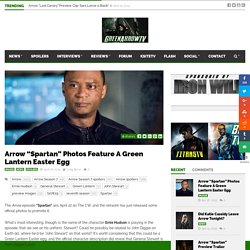 What’s most interesting, though, is the name of the character Ernie Hudson is playing in the episode, that we see on his uniform. Stewart? Could he possibly be related to John Diggle on Earth-90, where he’d be “John Stewart” on that world? It’s worth considering that this could be a Green Lantern Easter egg, and the official character description did reveal that General Stewart is from Diggle’s past. 'The Flash' Reveals First Official Look at Godspeed. The Flash veteran Danielle Panabaker will direct this week's episode of The Flash, titled "Godspeed," and while the titular villain was widely assumed to be making his first appearance in the episode, all of the publicity in the run-up to now has centered on the conflict between Barry (Grant Gustin), Nora (Jessica Parker Kennedy), and Eobard Thawne (Tom Cavanagh). 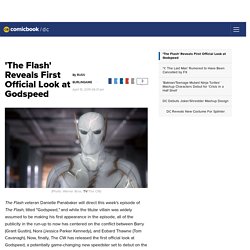 Now, finally, The CW has released the first official look at Godspeed, a potentially game-changing new speedster set to debut on the series tomorrow. Godspeed first appeared in The Flash: Rebirth #1, and was created by Joshua Williamson and Carmine Di Giandomenico. REPORT: Arrow Season 8 Will Feature Smallville Alum Tom Welling. What Will Fans Call The Arrowverse After 'Arrow' Ends? Last week it was announced that Arrow will come to an end upon the completion of Season 8 which will debut this fall. 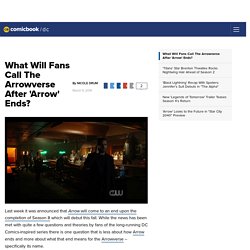 While the news has been met with quite a few questions and theories by fans of the long-running DC Comics-inspired series there is one question that is less about how Arrow ends and more about what that end means for the Arrowverse -- specifically its name. Arrow confirmed to be ending with season 8 — and there's even more bad news.

‘Arrow’ to End With Season 8 on The CW. All rage. No cage.  The Flash Set Photos May Reveal First Look at Major Rebirth Villain. The biggest Smallville Easter eggs to appear in Arrowverse shows. Arrow: Caity Lotz will appear in season 7's Bird of Prey episode. Elseworlds. Elseworlds is the publication imprint for a group of comic books produced by DC Comics that take place outside the company's canon: History Unlike its Marvel Comics counterpart What If...? 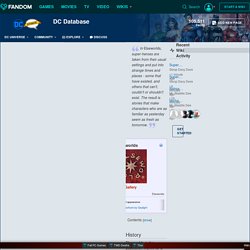 , which bases its stories on a single point of divergence from the regular continuity, most Elseworlds stories instead take place in entirely self-contained continuities whose only connection to the canon DC continuity are the presence of familiar DC characters. Imaginary Stories For several years from 1942[1] to the mid-1980s, particularly during the 1960s Silver Age of Comic Books era, DC Comics published various stories about their title characters which did not take place in their regular continuity.

'Arrow's David Ramsey Addresses Possibility Diggle Will Suit Up As Green Lantern. In the latest Arrowverse crossover on The CW, the Monitor's willingness to test the heroes across various realities caused some major implications for the future. While they survived the events of "Elseworlds," they'll have to deal with a "Crisis on Infinite Earths. " But they might get some back up in the form of a Green Lantern, as the original Flash teased when he saw John Diggle without a ring during the crossover. And Diggle actor David Ramsey admitted that he's just as excited as the fans. "We've been talking about that ring since Season 1," Ramsey said to TV Guide.

"I always loved the idea of being able to jump into the John Stewart mythos, obviously, but I also loved the idea that we were creating something that didn't exist before. Stephen Amell Says 'Elseworlds' Arrowverse Crossover Is Best Ever by a Large Margin. Stephen Amell Wraps Filming on Arrowverse "Elseworlds" Crossover. For weeks Stephen Amell has given fans many tantalizing behind-the-scenes looks at the upcoming "Elseworlds," but as with all good things that's coming to an end. The Arrow star has officially wrapped filming for the upcoming Arrowverse crossover. In a post shared to Twitter on Saturday, Amell said "that's a wrap" on the event and noted that he was ready for the weekend. Check out his tweet below. The Arrowverse Crossover’s New Villain Could Actually Be Good. It’s that time of year again.

Time for another Arrowverse crossover. What began as a couple quick and fun episodes to bring characters from Arrow and The Flash into the other worlds has morphed over the years into the show’s most-watched episodes of any season. Each crossover brings lots of questions – and this year’s more than most. After 2017’s mega four-part “Crisis on Earth-X” story, it was hard to imagine where the crossovers could go. 'Crisis on Infinite Earths' Coming to The CW in 2019. Arrowverse: ‘Crisis on Infinite Earths’ Will Be a Game Changer. 'The Flash' Reveals that Batwoman Will Be Part of "Crisis on Infinite Earths" 'Arrow' EP Says The Longbow Hunters Will Be a "Force" in Season 7.

Ricardo Diaz may be the primary threat this season on Arrow, but he will have some help from some very deadly allies, a team of assassins known as The Longbow Hunters and according to series showrunner Beth Schwartz, they're a major threat for the former Team Arrow. "They're a force," Schwartz said in an interview with Entertainment Weekly. "Each one has a different team member that they'll go toe-to-toe with, specifically with what weapons they use. " 'Arrow' Star Stephen Amell Comments on Wife and Daughter's Contributions to "Elseworlds" For Arrow star Stephen Amell, the Arrowverse is something of a family affair. His wife, Cassandra Jean Amell is playing Nora Fries in the upcoming "Elseworlds" crossover and even his young daughter is getting involved. During his appearance at Heroes and Villains Fan Fest in San Jose on Saturday, Amell talked about working with his wife during the crossover, but he also talked a little bit about his daughter, Mavi, and how he's been letting her "direct" episodes of Arrow.

The Batwoman TV show doesn't need Batman. Arrowverse Crossover Adds Cassandra Jean Amell as Nora Fries. Every New Character Coming to the Arrowverse This Season. We are just one month out from The Flash's fifth season premiere marking the return of all of The CW's Arrowverse shows and not only can fans look forward to new adventures for some of their favorite DC heroes, but there are a lot of new characters to look forward to as well. All four shows -- Supergirl, Arrow, The Flash, and Legends of Tomorrow -- have announced some of the new characters who will come on board as enemies and allies to the heroes this fall. And while some of the announced characters are pretty big and exiting, such as Batwoman, some are a bit more obscure. Still others are completely original and, in at least one case, it's a familiar character being teased in a whole new way. With so many new characters headed to the Arrowverse, we've decided to make a list of all of the new characters confirmed for the upcoming season.

However, before we jump into the list we do have a few points to note. Are you ready to see what characters are coming to the Arrowverse?