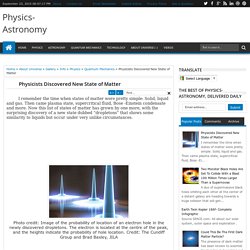 Then came plasma state, supercritical fluid, Bose -Einstein condensate and more. Now this list of states of matter has grown by one more, with the surprising discovery of a new state dubbed “dropletons” that shows some similarity to liquids but occur under very unlike circumstances. The discovery of new state of matter occurred when a team of scientists at the University of Colorado Joint Institute for Lab Astrophysics were concentrating laser light on gallium arsenide (GaAs) to generate excitons. Data Storage In Crystal Quartz Will Change Everything! Source: www.thespiritscience.net | Original Post Date: February 13, 2014 – You know how much I LOVE talking about new technology, right? 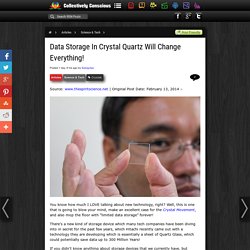 Well, this is one that is going to blow your mind, make an excellent case for the Crystal Movement, and also mop the floor with “limited data storage” forever! There’s a new kind of storage device which many tech companies have been diving into in secret for the past few years, which Hitachi recently came out with a technology they are developing which is essentially a sheet of Quartz Glass, which could potentially save data up to 300 Million Years!

If you didn’t know anything about storage devices that we currently have, but anything from records, CD’s, USB sticks, magnetic tape, none of these can even lay a finger on this new, very impressive technology. “The prototype is made of a square of quartz two centimeters wide and two millimeters thick. Now, while this is exciting, there’s more to it than just that. The Crystal Skulls. Computador adivinha quando doente vai morrer. Exatidão é de 95% Paciente com tumor recebe costelas através de impressão 3D. Maior purificador de ar do mundo transforma poluição em joalharia. Freaky AI robot. Problem loading page. Now Trending: CRISPR. Nearly everyone has heard references to the “genetic code,” a metaphor for the series of nucleotide bases that makes each of us unique. 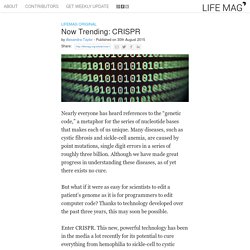 Many diseases, such as cystic fibrosis and sickle-cell anemia, are caused by point mutations, single digit errors in a series of roughly three billion. Although we have made great progress in understanding these diseases, as of yet there exists no cure. But what if it were as easy for scientists to edit a patient’s genome as it is for programmers to edit computer code? Thanks to technology developed over the past three years, this may soon be possible. Enter CRISPR. CRISPR is shaking up gene therapy by providing a faster and easier method of editing the human genome. The acronym CRISPR stands for “Clustered, Regularly-Interspaced Short Palindromic Repeats” and describes segments originally discovered in bacterial DNA in 1987. This has huge implications for gene therapy, which deals with diseases caused by errors in the genetic code.

The dangers. New Large Hadron Collider study may overturn Standard Model of physics. US scientists have conducted potentially revolutionary research that could force a rewrite of the Standard Model, the theory for how particles interact, which has been accepted by physicists since the 1970s. 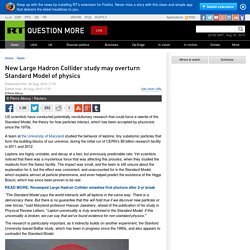 A team at the University of Maryland studied the behavior of leptons, tiny subatomic particles that form the building blocks of our universe, during the initial run of CERN’s $9 billion research facility in 2011 and 2012. Leptons are highly unstable, and decay at a fast, but previously predictable rate. Yet scientists noticed that there was a mysterious force that was affecting this process, when they studied the readouts from the Swiss facility. The impact was small, and the team is still unsure about the explanation for it, but the effect was consistent, and unaccounted for in the Standard Model, which explains almost all particle phenomena, and even helped predict the existence of the Higgs Boson, which has since been proven to be real. Modafinil: the future of neuroenhancement? - Health & Families - Life and Style - The Independent. Our new research reviewing the cognitive effects of the “smart pill” modafinil has found that it can improve the performance of healthy people on cognitive tasks, meaning it can be considered the first of these “neuroenhancement agents”. 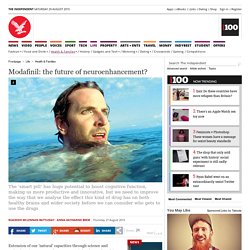 But, what is also clear is that we need to radically improve the way that we analyse the effect this kind of drug has on both healthy brains and wider society. Modafinil is a stimulant drug, licensed by the Food and Drug Administration to help people with sleep disorders stay awake. A startup that grows metal expands with money from Founders Fund. A Seattle startup has found a way to grow high performance metals in a cheap and energy efficient way, marking an important breakthrough for industries like construction, automotive, and oil and gas. 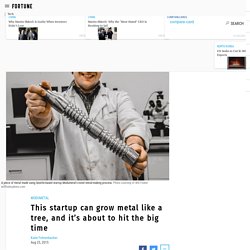 You can already find some of the metals from seven-year-old company Modumetal on oil rigs off of the Australian and African coasts, as well as the U.S., off of Texas. Those metals can withstand the ocean's corrosive power for up to eight times longer than conventional materials, according to the company. VTOL Flight 20150715. MultiFab: Vision-Assisted Multi-Material 3D Printing. Russian scientists create artificial brain that can educate itself. In a step closer to developing artificial intellect, Russian scientists have created a physical model of a brain that is able to educate itself. 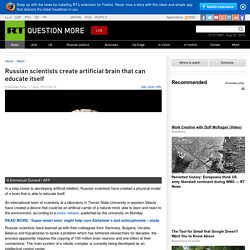 An international team of scientists at a laboratory in Tomsk State University in western Siberia have created a device that could be an artificial carrier of a natural mind, able to learn and react to the environment, according to a press release, published by the university on Monday. READ MORE: ‘Super-smart mice’ might help cure Alzheimer’s and schizophrenia – study Russian scientists have teamed up with their colleagues from Germany, Bulgaria, Ukraine, Belarus and Kazakhstan to tackle a problem which has bothered researchers for decades: the process apparently requires the copying of 100 million brain neurons and one trillion of their connections. Injection which could cure obesity developed at Harvard and MIT. The scientists believe the technique could prevent or even cure obesity in those people with the faulty gene and negate the effects of a high-fat diet. 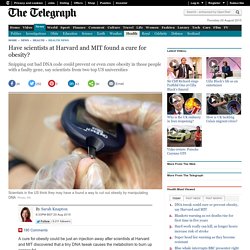 "Obesity has traditionally been seen as the result of an imbalance between the amount of food we eat and how much we exercise, but this view ignores the contribution of genetics to each individual's metabolism," said senior author Professor Manolis Kellis, of MIT's Computer Science and Artificial Intelligence Laboratory (CSAIL) and of the Broad Institute.

"Knowing the causal variant underlying the obesity association may allow genome editing as a therapeutic avenue for individuals as risk. This Mouse Can Be Wirelessly Controlled With LED Light. ‘Terrifying’ Terminator-like robot let loose in US woods (VIDEO) A Google subsidiary has taken a large step – quite literally – in trying to make humanoid robots as realistic as possible. 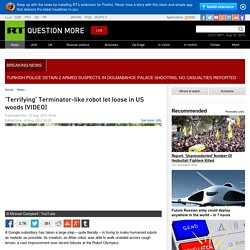 Its creation, an Atlas robot, was able to walk unaided across rough terrain, a vast improvement over recent failures at the Robot Olympics. If you go out in the woods today, you're sure of a big surprise – that would be sound advice for residents around the Boston area. However, don’t expect to find anything remotely as cuddly or cute as a teddy bear’s picnic, because a hulking terminator-like robot has been spotted roaming around the area. This is no hunter killer – well not yet anyway – it is a project by Boston Dynamics, a Google subsidiary, who specialize in robot design.

Its creators have now let it out of the lab and into the open. “We are interested in getting this robot out into the world. Samsung anuncia disco de 16TB. Supercomputer simulates one second of human brain activity in 40 minutes. The human brain is arguably the most complex structure in the Universe. 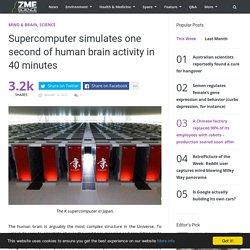 To unlock its secrets, scientists all over the world are mapping and simulating parts of the human brain. The latest breakthrough comes from Japan where scientists using the K supercomputer, the fourth most powerful in world, accurately mapped one second’s worth of brain activity. It took the computer 40 minutes to undertake this task, for one percent of the brain activity!

A lot of people liken the brain to a computer. In many respects they’re right, but by no means can this comparison be made using conventional computers. Motorbike that runs on WATER: 1 liter to travel 500km. Japoneses disparam o laser mais poderoso do mundo. Nasa validates 'impossible' space drive. Nasa is a major player in space science, so when a team from the agency this week presents evidence that "impossible" microwave thrusters seem to work, something strange is definitely going on. Either the results are completely wrong, or Nasa has confirmed a major breakthrough in space propulsion. 'Impossible' EM Propulsion Engine Confirmed by Scientists. 1.7k But how does it work? By Matt PorterGerman scientists have confirmed that an Electromagnetic Propulsion Engine, claimed by some to be 'impossible', actually works. The EM Drive breaks the conservation of momentum law of physics, which is why it was originally widely ridiculed by the scientific community.

However after repeated testing, it appears that the engine is actually producing thrust. Claims earlier in the year that it was creating a warp field have now been refuted. Scientists 'delete' HIV virus from human DNA for the first time. Scientists used a DNA-snipping enzyme called Cas9 to cut out the virusThe cell's gene repair machinery then takes over, soldering the loose ends of the genome back together – resulting in a virus-free cell Process could also be a cure for other latent infections, researchers say'It's an exciting discovery, but not ready to go into the clinic,' said Dr Khalili By Ellie Zolfagharifard Published: 11:35 GMT, 22 July 2014 | Updated: 15:59 GMT, 22 July 2014 Once HIV conquers a human cell, it will stay there forever.

It inserts its deadly genome permanently into its victims' DNA, forcing them to require medical treatment for the rest of their life. Intel's new storage chip is 1,000 times faster than flash memory. Hackers controlaram Jeep à distância e despistaram-no. Matter will be created from light within a year, claim scientists. Researchers have worked out how to make matter from pure light and are drawing up plans to demonstrate the feat within the next 12 months. The theory underpinning the idea was first described 80 years ago by two physicists who later worked on the first atomic bomb. At the time they considered the conversion of light into matter impossible in a laboratory. But in a report published on Sunday, physicists at Imperial College London claim to have cracked the problem using high-powered lasers and other equipment now available to scientists. "We have shown in principle how you can make matter from light," said Steven Rose at Imperial.

ALASA Concept Video. The Man Who Invented the 26th Dimension — Starts With A Bang! Startup Turns Hundreds of Vehicles into WI-Fi Routers in Portugal. 3D Printer Cranks Out Houses. How Quantum Computing Will Change The World! Acoustic Levitation Breakthrough: Ultrasonic Device Has More Control Than Any Other Before It! Google Chairman Eric Schmidt: "The Internet Will Disappear" Hoping to Set Sail on Sunlight. ​Minute machines dive inside a living creature for first time — RT News. Microsoft HoloLens: An experience you never knew you wanted (hands-on)