WHO Launches Interactive COVID-19 Service on Facebook Messenger. New 83 Corona Cases in Jaipur Take Rajasthan’s Tally Past 1000-Mark. Jaipur on Tuesday registered 83 new Covid-19 positive cases out of the 108 samples testing positive in the state, taking the city’s tally to 453 even as the total number of cases in Rajasthan surged to 1,005, Additional Chief Secretary Rohit Kumar Singh said. 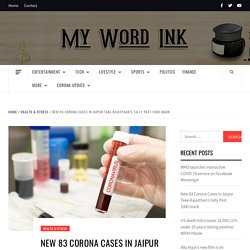 Out of the 83 new cases which surfaced in Jaipur, 67 have been reported from Ramganj, Singh said, adding that new cases have also emerged from Raja Park and Kho Nagoriyan. Four cases have also been reported from Moti Doongri Road, he said. Thirteen new cases were reported from Jodhpur, which took the city’s tally to 95, Singh added. Kota saw eight new cases, which took its tally to 57, while Jhalawar reported 2 new cases, taking the total number of cases in the city to 17. Jaisalmer and Jhunjhunu reported one case, taking their tally to 30 and 32, repectively. US Death Toll Crosses 16,500; 11% Under 25 Years Testing Positive: White House.

In the US, 11 out of 100 people under the age of 25, 17 per cent of those in the 25 to 45 age group and 21 per cent of those between 45 and 65 years who presented with symptoms have tested positive for coronavirus, according to age-wise testing data available for the first time from the White House on a day when America’s death toll climbed past the 16,500 mark with total confirmed cases more than 462,000. 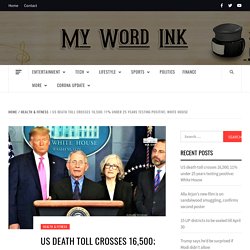 On the same day, New York State suffered the deadliest blow, posting a record-breaking increase in coronavirus deaths for a third consecutive day even as hospitalisations and intubations slowed, suggesting the curve is finally flattening. The net 200-patient increase in hospitalisations is the lowest since the nightmare began. White House data is also showing that US men are testing positive at a much higher rate than women. Birx urged American men who are symptomatic to get tested. Allu Arjun’s New Film is on Sandalwood Smuggling, Confirms Second Poster. On the occasion of Telugu star Allu Arjun’s 37th birthday, the makers of his upcoming film took to social media to announce the title of his next film, and also share the posters. 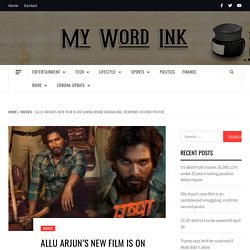 Titled “Pushpa”, the posters of the Sukumar directorial show the stylish star in a rugged and rustic avatar. While the first look poster shows a close-up of the star, the second poster shows him seated crossed-legged on the ground with police officers standing in the background while sandalwood is being loaded onto a vehicle. The poster confirms the reports that the film is based on sandalwood smuggling, and will be set in a forest.

“First Look and the Title of my next movie ‘P U S H P A’. 15 UP districts to be sealed till April 30. Trump Says he’d be Surprised if Modi Didn’t Allow Hydroxychloroquine Export. While India has lifted its ban on exports of hydroxychloroquine to the US, President Donald Trump has said that he would be surprised if Prime Minister Narendra Modi did not allow it. 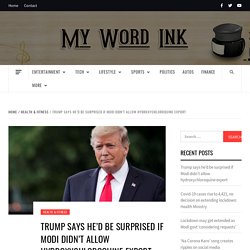 “I would be surprised if he does (ban its export to the US), because, you know, India does very well with the US,” he said on Monday at the COVID-19 Task Force briefing at the White House. Trump had called Modi on April 4 and asked him to allow the export of hydroxychloroquine to the US to use it against the coronavirus epidemic. Modi tweeted after the call that they “agreed to deploy the full strength of the India-US partnership to fight COVID-19”. Covid-19 Cases Rise to 4,421, No Decision on Extending Lockdown: Health Ministry. The Union Ministry of Health and Family Welfare said on Tuesday that India has reported 4,421 positive Covid-19 cases so far. 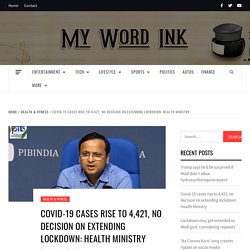 Speaking to the media, Joint Secretary at the Health Ministry, Lav Agarwal, said, “4,421 confirmed corona cases have been reported from across the country. As many as 326 people have recovered and have been discharged. At least 354 new cases and eight deaths have been reported in the last 24 hours. Lockdown May Get Extended as Modi Govt ‘Considering Requests’ Multiple state governments and experts have requested the Central Government to extend the ongoing 21-day lockdown further and the Modi government is considering their suggestions, say government sources. 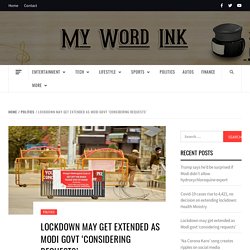 This comes a day after Telangana Chief Minister K. Chandrashekar Rao made a strong case for the extension of the ongoing lockdown. Rao had advocated for the extension of the current shutdown saying, “The Centre and all other State Governments have lost revenue during the lockdown period. ‘Na Corona Karo’ Song Creates Ripples on Social Media. Selena Gomez Stalking Justin Bieber on Instagram? Singer Selena Gomez recently liked and unliked two photographs of pop singer Justin Bieber on Instagram, making some fans wonder if she is stalking her former boyfriend even as others felt her Instagram account could have been hacked. 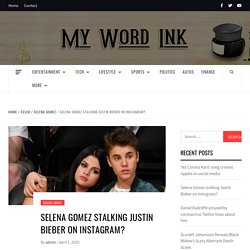 Earlier this year, Gomez claimed that her eight-year relationship with Bieber led to emotional abuse. Fans went into a tizzy when they saw that some photographs of Bieber were liked by Gomez’s Instagram account last weekend, before unliking the same. They called it a hack job, reports dailymail.co.uk. Daniel Radcliffe Amused by Coronavirus Twitter Hoax About him. Actor Daniel Radcliffe says he was amused by the coronavirus hoax about him on Twitter. 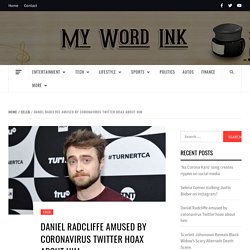 The “Harry Potter” star became the first celebrity to become a coronavirus Twitter hoax when a tweet from a fake BBC News account falsely claimed that the actor had tested positive for coronavirus. In an interview with Vulture, the “Harry Potter” star said that he had been in hair and make-up before a play performance when the artist broke the fake news to him, reports eonline.com. Scarlett Johansson Reveals Black Widow's Scary Alternate Death Scene. Scarlett Johansson Talks Saying Goodbye to Black Widow. Although Marvel’s Black Widow has been delayed indefinitely due to the novel coronavirus (COVID-19) outbreak, Natasha Romanoff’s final onscreen adventure will soon be upon us — and fans will be forced to say farewell to the character, just as Scarlett Johansson was after wrapping filming on the character’s long-awaited solo movie. 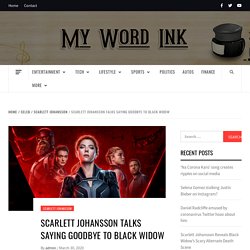 In a recent interview with Empire, Johansson spoke about her time playing Natasha Romanoff in the Marvel Cinematic Universe, describing what it was like to be part of the franchise for 10 years. She described her complicated feelings about leaving that world behind, along with everyone she’s worked with over the past decade. Badshah’s New Song with Payal Dev Out Now. Coronavirus News Update. Thousands of Instagram Users’ Personal Details Exposed. A social media booting service called Social Captain, that helps users grow their Instagram follower counts, has leaked thousands of Instagram usernames and passwords for potential hackers. 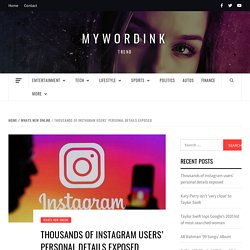 According to a TechCrunch report, Social Captain stored passwords of linked Instagram accounts in unencrypted plaintext. A website vulnerability allowed anyone access to any Social Captain user’s profile without having to log in and access their Instagram login credentials. “A security researcher, who asked not to be named, alerted TechCrunch to the vulnerability and provided a spreadsheet of about 10,000 scraped user accounts,” said the report. About 70 accounts were premium accounts of paid customers. Social Captain said later it had fixed the vulnerability by preventing direct access to other users’ profiles. Instagram said the service breached its terms of service by improperly storing login credentials.

“We are investigating and will take appropriate action. Katy Perry isn’t ‘Very Close’ to Taylor Swift. Pop superstar Katy Perry says she isn’t very close to singer Taylor Swift. In an interview with Stellar magazine, Perry addressed the much talked about speculation over her relationship with fellow pop star Swift, reports etonline.com. The musicians have had a rocky relationship over the years, and now Perry has shared that the two do not have a great bond currently. “We don’t have a very close relationship because we are very busy, but we text a lot,” she said, adding: “I was impressed by her documentary (‘Miss Americana’) because I saw some self-awareness starting to happen and I saw a lot of vulnerability.” Taylor Swift Tops Google’s 2020 List of Most-Searched Woman. AR Rahman ’99 Songs’ Album. BJP in MP-22 Rebel MP Cong MLAs Meet BJP Chief in Scindia’s Presence.

Twenty-two Congress legislators, including six ministers, who earlier tendered their resignations amid a political crisis in Madhya Pradesh as Jyotiraditya Scindia jumped ship to BJP, met BJP Presidnet J.P. Nadda on Saturday. The Last One Hour Before the Convicts were Hanged. Coronavirus Latest News. Cab-hailing companies Uber and Ola said on Friday they have suspended pool ride services across India in the wake of growing new coronavirus fears. Tom Hanks, Wife Rita Wilson Released from Hospital. Hollywood star Tom Hanks and his wife Rita Wilson have been released from the hospital in Australia after receiving treatment for COVID-19 infection. Download Movie Angreji Medium. COVID-19: Epidemic to Hit Delhi Box Office Hard. Rashami Desai’s first look in ‘Naagin 4’ out. 10, Including 2 in Mumbai, Test Positive for Covid-19 in Maha.

If it is contained to a large extent to China, it will impact the country the hardest. If it starts to spread outside, the impact could be significantly more severe affecting, in particular, the ASEAN countries (Hong Kong, Singapore, etc.) or Japan, the note said. Holi Ringtones. Facebook Bans Misleading Coronavirus Ads. Facebook on Wednesday announced to ban ads related to coronavirus that promise to cure, prevent or spread panic among the users around COVID-19. Realme Launches its First 5G Smartphone in India. Chinese smartphone maker Realme on Monday launched its first 5G smartphone titled ‘X50 Pro 5G’ in India, starting from Rs 37,999. No case of coronavirus in Kashmir, but spike in H1N1 nos. KGF Song Ringtone Download.