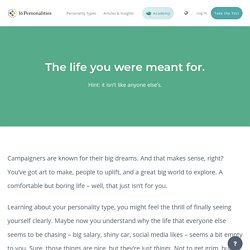 And that makes sense, right? You’ve got art to make, people to uplift, and a great big world to explore. A comfortable but boring life – well, that just isn’t for you. Learning about your personality type, you might feel the thrill of finally seeing yourself clearly. Maybe now you understand why the life that everyone else seems to be chasing – big salary, shiny car, social media likes – seems a bit empty to you. So why are you here? 85% of Campaigners say that if they had more self-discipline, they would have achieved more of their goals by now. Here’s the thing: self-discipline is overrated. Clarity about what you want, insight on how to get there, and accountability to keep you on track. That isn’t to say it’s effortless. And that, dear Campaigner, is where we come in. For many years, I thought there was something wrong with me, mainly because I was so vastly different to my family.

Good news: you don’t have to figure it all out on your own. YouTube. Boxing Nutrition: Probiotics and improving mood. A new study out of the Leiden Institute of Brain and Cognition at Leiden University in the Netherlands suggests that probiotics may actually aid in improving mood. 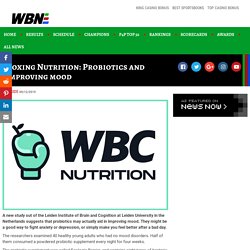 They might be a good way to fight anxiety or depression, or simply make you feel better after a bad day. The researchers examined 40 healthy young adults who had no mood disorders. Half of them consumed a powdered probiotic supplement every night for four weeks. The probiotic supplement was called Ecologic Barrier, and contains eight types of bacteria, such as Bifidobacterium, Lactobacillus, and Lactococcus (these three types of bacteria that have been shown in the past to mitigate anxiety and depression).

The other half of the participants took a placebo, although they thought they were taking probiotics. The people who took probiotic supplements began to see improvements in their moods; they reported less reactivity to sad moods than those who took placebos. Redefining Healthy Eating and Our Relationship with FoodCHADD Webinar - CHADD. Structured Bean Bags – The Fluffy Company. India’s leading Invoice Discounting Platform. Apply for Personal Loans Online - Monexo. 13 Ways to Improve Memory Naturally. Why can’t I recall her name? 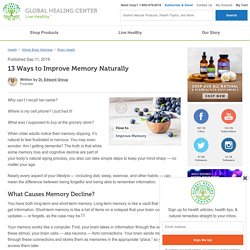 Where is my cell phone? I just had it! What was I supposed to buy at the grocery store? When older adults notice their memory slipping, it’s natural to feel frustrated or nervous. You may even wonder: Am I getting dementia? Nearly every aspect of your lifestyle — including diet, sleep, exercise, and other habits — can mean the difference between being forgetful and being able to remember information. What Causes Memory Decline? You have both long-term and short-term memory.

Your memory works like a computer. Several brain regions work together to create memories and process information. How to Improve Your Memory Whatever your age or health status, you can support the parts of your brain involved in memory. Improving your memory involves strengthening the health of your neurons and the connections between them. 1. When you sleep, your brain consolidates or permanently stores recent memories. 2.

A whole-food, plant-based diet provides this type of nourishment. 3. Calnewport. November 11th, 2011 · 309 comments The Berlin Study In the early 1990s, a trio of psychologists descended on the Universität der Künste, a historic arts academy in the heart of West Berlin. 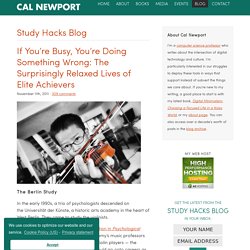 They came to study the violinists. As described in their subsequent publication in Psychological Review, the researchers asked the academy’s music professors to help them identify a set of stand out violin players — the students who the professors believed would go onto careers as professional performers. We’ll call this group the elite players. For a point of comparison, they also selected a group of students from the school’s education department. We’ll call this group the average players. The three researchers subjected their subjects to a series of in-depth interviews.