April #HSEntChat: Social Media Learnings from the Sports Industry. Public Relations is about Buyers. Not Clip Books. In the early 2000s, I was vice president of marketing and PR for two publicly traded companies. 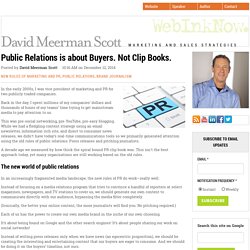 Back in the day, I spent millions of my companies’ dollars and thousands of hours of my teams’ time trying to get mainstream media to pay attention to us. This was pre-social networking, pre-YouTube, pre-easy blogging. While we had a fledgling content strategy using an email newsletter, information rich site, and direct to consumer news releases, we didn’t have today’s real-time communications tools so we primarily generated attention using the old rules of public relations: Press releases and pitching journalists.

A decade ago we measured by how thick the spiral bound PR clip book was. This isn't the best approach today, yet many organizations are still working based on the old rules. The new world of public relations In an increasingly fragmented media landscape, the new rules of PR do work—really well. Adelyn Biedenbach sur Twitter : "Post-End date in action on @Facebook's new features. No excuse for posts after events are over now! #SocialMediaWins. Tariq Ahmad sur Twitter : "COOL: #socialmedia vending machine accepts Instagram photos as payments. IHeartRadio Goes on College Tour With Instagram Vending Machine.

IHeartRadio is touring the country with a T-shirt vending machine that accepts Instagram photos as payment. 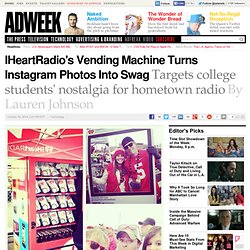 The marketing effort has racked up 5.7 million impressions—likes, shares, views—in the first week on the photo-sharing app, according to iHeartRadio. The five-week campaign (which runs through Nov. 15) stops at 10 college campuses in the Midwest and South, including Arizona State University, the University of Texas and Florida State University. Check Out Snapchat's First Ad for 'Ouija' Movie. Snapchat's first sponsored message arrived today, and it was a video ad from Universal Pictures previewing its movie Ouija. 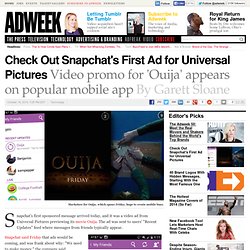 The ad was sent to users' "Recent Updates" feed where messages from friends typically appear. Snapchat said Friday that ads would be coming, and was frank about why: "We need to make money," the company said. It was unclear how many of the apps' estimated 100 million users received the sponsored snap from Universal. Everything You Need To Know About Google Primer. How many startups failed to take off solely due to marketing inexperience? 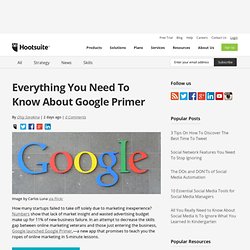 Numbers show that lack of market insight and wasted advertising budget make up for 11% of new business failure. In an attempt to decrease the skills gap between online marketing veterans and those just entering the business, Google launched Google Primer,—a new app that promises to teach you the ropes of online marketing in 5-minute lessons. What: A new iOS app from GoogleWhy: To teach digital marketing basics in a simple, efficient wayHow much: FreeWhere you can get it: App Store Here at Hootsuite, we address the digital skills gap with multiple resources available through Hootsuite University. Google is going for the mobile approach. According to the app’s website, Google partnered up with marketing professionals to create content valuable for startups’ digital marketing efforts. 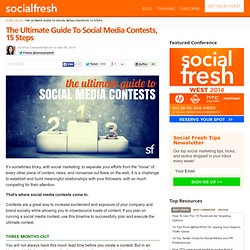 Baltimore Orioles Adam Jones tires of social media. Image uploaded by @Hootsuite_U. WCAG Overview. Introduction Web Content Accessibility Guidelines (WCAG) is developed through the W3C process in cooperation with individuals and organizations around the world, with a goal of proving a single shared standard for web content accessibility that meets the needs of individuals, organizations, and governments internationally. 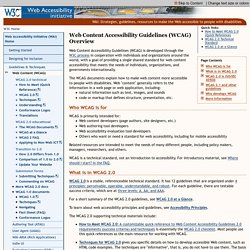 The WCAG documents explain how to make web content more accessible to people with disabilities. Web "content" generally refers to the information in a web page or web application, including: natural information such as text, images, and sounds code or markup that defines structure, presentation, etc.

Off the Beaten Path: 6 Unusual Ways to Use Pinterest. Pinterest is no longer just about food, clothes, and weddings. 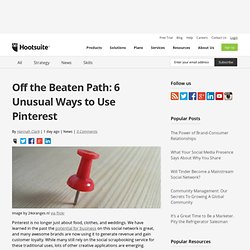 Is social media manager a stressful job? Is it worse if you’re a woman? I have a saying hanging in my home office that says, “Look like a girl, act like a lady, think like a man, work like a boss.” 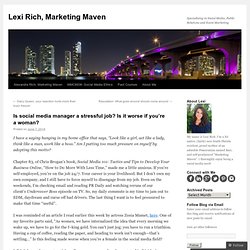 Am I putting too much pressure on myself by adopting this motto? What to Charge for Social Media Work (as a Freelancer or Consultant) How Much Does Social Media Cost. It seems that most people in business are starting to realize that social media, though free, really doesn’t do much unless you put a lot into it. 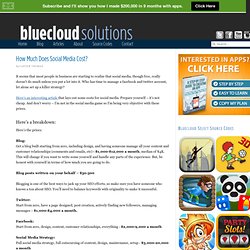 Who has time to manage a facebook and twitter account, let alone set up a killer strategy? Here’s an interesting article that lays out some costs for social media. Best April Fools Pranks of the Day. Today’s the day that many of us will forget to keep our guard up while friends, co-workers and even family prepare their next big pranks on each other. 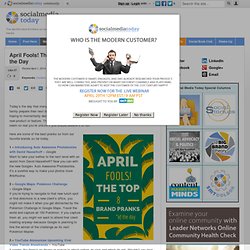 In recent years, brands have joined in on the fun, hoping to momentarily deceive followers and customers into believing their absurd and often hilarious new product or feature. They are often accompanied by press releases or video announcements that seem so real you’re unsure if you should believe it or not. Here are some of the best pranks so from our favorite brands so far today. 1 » Introducing Auto Awesome Photobombs with David Hasselhoff » Google Want to take your selfies to the next level with an assist from David Hasselhoff? Meet 2014′s Top 100 Community Managers on Twitter. Community Manager Appreciation Day (CMAD) 2014 is upon us! This year, in celebration of #CMAD2014 (yes, that’s the official hashtag!) My Community Manager has teamed up with Hootsuite and a handful of other community-oriented companies to celebrate the all-stars who keep our social networks running smoothly. They’ve collectively organized 24 hours of live hangouts, to begin on January 27, 2014 beginning at 00:00 EST (05:00 GMT).

They’ll also be announcing 8 unique awards to peer-nominated community managers across several different categories. Here at Little Bird, we think the inspiration behind CMAD is awesome! HootSuite Acquires Social Analytics Leader UberVU. McDonald's social media campaign to connect athletes and fans in Sochi. For anyone who's ever been inspired by an Olympic athlete, now's the chance to return the favor. Fans can wish their favorite athletes good luck at the Sochi Olympics through McDonald's "#Cheers to Sochi" campaign, which will kick off Thursday.

The messages, sent via Twitter or posted on the campaign's website, will be displayed at the athletes village in Sochi, and athletes will be able to print out their favorites on ribbons that can be worn throughout the Games. "In the previous Olympics I've attended, there was never a way for the fans that follow the Winter Olympics to really stay in touch or follow the participants.

Vine introduces Web Profiles. By Nick Cicero on Jan 03, 2014 With more than 40 Million users worldwide, Vine has exploded with a unique mobile-first audience. Today Vine introduces Web profiles bringing the 6-second viewing experience to the desktop. Web profiles come with a home feed allowing users to like, comment, and share videos just like on mobile. They also released a new mode for users to watch for an extended period of time, TV Mode.

TV Mode allows users to watch their Vine videos in fullscreen. How Food Brands are harvesting success from trending topics. The Tweets are alive, echoing trends from everywhere… Social listening is key to growing any social media following. One common recommendation to a start up or organization with their eyes set on exponential growth is to focus on trending topics, use current hashtags and join common conversations. Why Your Social Strategy Is Not One Size Fits All. Adelynlee. How To Use Data To Create A Fool-Proof Tweet Calendar. Let’s say your business sends, maybe, four original tweets per day. 7 Things Your Social Media Consultant Should Tell You. Six Questions to Ask a Social Media Consultant.