The Way of Least Resistance: Single whip: Part 1 - defence against that first punch. Dan Djurdjevic. Tai Chi Move: Single Whip. Each tai chi form can be broken down into a series of individual movements. 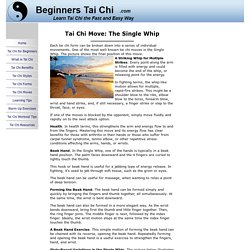 One of the most well known tai chi moves is the Single Whip. The picture shows the final position of this move. A Striking Whip for Multiple Strikes. Every point along the arm is filled with energy and could become the end of the whip, or releasing point for the energy. In fighting terms, the whip-like motion allows for multiple, rapid-fire strikes. If one of the moves is blocked by the opponent, simply move fluidly and rapidly on to the next attack option. Health. Beak Hand. This hook or beak hand is useful for a jabbing type of energy release. The beak hand can be useful for massage, when wanting to relax a point of deep tension. Forming the Beak Hand. The beak hand can also be formed in a more elegant way. A Beak Hand Exercise. Style-Based Variations in the Single Whip. Chen and Yang Single Whip. Wu Style Single Whip. This double weighting isn’t conducive for fighting. Complete Yang Style Tai Chi Long Form Applications - Step by Step - Part 1. Yang Tai Chi Long Form Reference - Gilman Modification - 2007.

Yang Style Tai Chi Long Form - Gilman's Modification. Front and Back Views. William Chen Tai Chi - How to Punch - Videos. Subscribe to view all the videos on this channel. 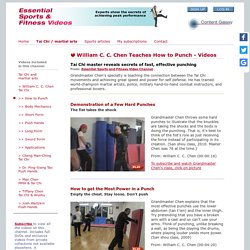 Tai Chi master reveals secrets of fast, effective punching From: Essential Sports and Fitness Video Channel How to get the Most Power in a Punch. Yang Style Tai Chi. Yang style tai chi is the first style of tai chi to be properly formulated in to forms and one of the most popular styles today. 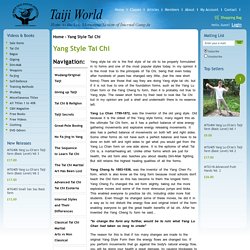 In my opinion it is the most true to the principals of Tai Chi, being that even today after hundreds of years has changed very little, (bar the new short forms) There are those that say they are doing Yang style tai chi, but if it is not true to one of the foundation forms, such as the Yang Lu Chan form or the Yang Cheng fu form, then it is probably not true to Yang style. The newer short forms try their best to look like Tai Chi but in my opinion are just a shell and underneath there is no essence left. 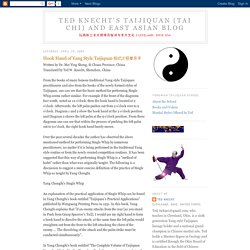 Mei Ying Sheng, Si Chuan Province, China Translated by Ted W. Knecht, Shenzhen, China From the books of many famous traditional Yang style Taijiquan practitioners and also from the books of the newly formed styles of Taijiquan, one can see that the basic method for performing Single Whip seems rather similar. For example if the front of the diagrams face south, noted as 12 o'clock, then the hook hand is located at 2 o'clock. Afterwards, the left palm pushes out from 2 o'clock over to 9 o'clock. Personal reflections. What is it like to fight with Tai Chi Ch’uan(Taijiquan)? 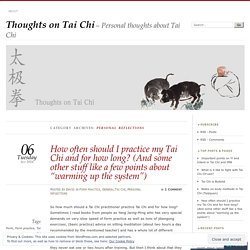 I don’t mean in a technical sense, or ask about what techniques or methods you could use in this art. You can find plenty of material about ideas on fighting methods and techniques everywhere. That is in my own opinion of less interest. What I mean is: How do you feel when you fight with Tai Chi? Is your combative mind different when you practice Tai Chi as your first and foremost art of combat? But first of all, I am not a typical fighter and I don’t look at myself as anything even close to a fighter. So why then can someone say that he had learned more about fighting from Tai Chi than from any other art? The thing is, when it comes to Tai Chi as a combat art, is that these basic concepts of timing and distance is not only something that is always joined together with relaxation and balance.