What happened when a college newspaper abandoned its website for Medium and Twitter. The Mountaineer student newspaper at California’s Mt. 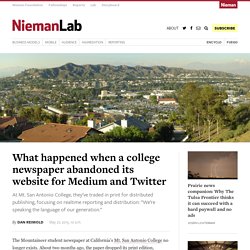 San Antonio College no longer exists. A Few Good Reasons to Drop Out of Art School. Nestled among the exhibition reviews and auction reports in contemporary-art journalism last week were scattered items about the Roski School of Art and Design, at the University of Southern California. 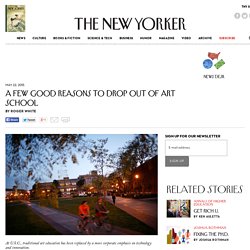 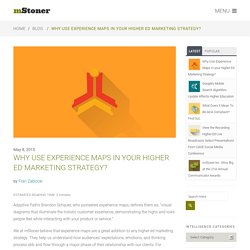 By Fran Zablocki ESTIMATED READING TIME: 2 minutes. Another Use for Yik Yak on Campus? Cheating on Exams. With new technologies come new ways to cheat. 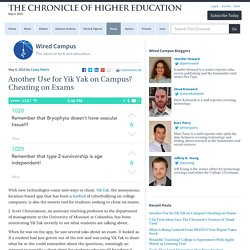 Yik Yak, the anonymous, location-based app that has been a hotbed of cyberbullying on college campuses, is also the newest tool for students seeking to cheat on exams. J. Scott Christianson, an assistant teaching professor in the department of management at the University of Missouri at Columbia, has been monitoring Yik Yak recently to see what students are talking about. Voices From Sweet Briar: Students and Faculty Prepare to Move On - Leadership & Governance. Bell Hall - Living & Learning at Curry College. Feb 2015 #highered Benchmarking Web Analytics Report [RESEARCH] 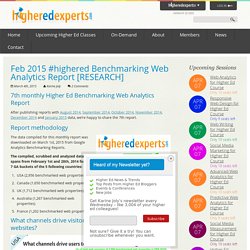 Report methodology The data compiled for this monthly report was downloaded on March 1st, 2015 from Google Analytics Benchmarking Reports. 12 Captivating University Twitter Bios. There are a lot of different ways to craft a bio in Twitter. 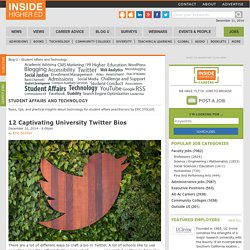 A lot of schools like to use something like "the official Twitter account of ______ University" or "Tweets from the University of ______" This is a fairly standard practice. Institutions use their Twitter accounts for engagement, recruitment, news, alerts, and myriad 140 character posts. Some bios simply read as being fairly repetitive with the account "@something" in the actual bio. This is most-likely a result of search engine optimization as a well-written bio is going to be indexed by Google and other search engines. 3 Higher-Ed Social Media Blunders (and What They All Have in Common) Date posted: December 1, 2014 According to a recent survey by YouVisit, more than 68 percent of students use social media to narrow down their post-secondary options. 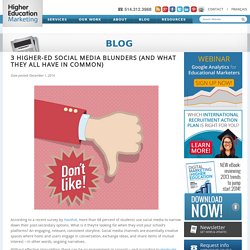 What is it they’re looking for when they visit your school’s platforms? An engaging, relevant, consistent storyline. Uld online courses be the death of the humanities? Let's be clear, access to quality lectures for free is a fantastic achievement, allowing hundreds of thousands to access knowledge for its own sake. 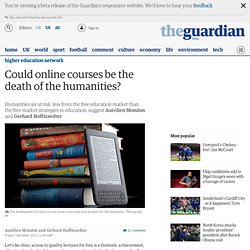 But with Tedx, Coursera and others like them taking part in the democratisation of education by removing it from the shackles of consumerism and the market, there is a risk that such developments will be detrimental to the exploration of knowledge in the long term. Answering a Social Media Question. Question: How can our office utilize social media to build community and enhance connections with students? 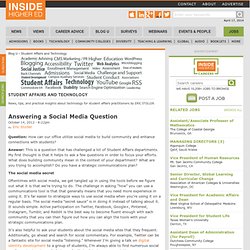 Answer: This is a question that has challenged a lot of Student Affairs departments. My first thought is that it helps to ask a few questions in order to focus your efforts. What does building community mean in the context of your department? Essay predicting that campuses will be completely digital in 3 years. The time has come to ask the question: When will we see the complete digital transformation of higher education in the United States? 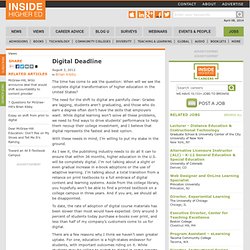 The need for the shift to digital are painfully clear: Grades are lagging, students aren’t graduating, and those who do earn a degree often don’t have the skills that employers want. While digital learning won’t solve all these problems, we need to find ways to drive students’ performance to help them recoup their college investment, and I believe that digital represents the fastest and best option. With these needs in mind, I’m willing to put my stake in the ground. As I see it, the publishing industry needs to do all it can to ensure that within 36 months, higher education in the U.S. will be completely digital. Out_in_the_ecos_2. By Ted Chan, Founder, Noyo As the Founder of several educational startups myself, I am especially curious when I see innovative approaches in higher education.

Recently, I came across an interesting case speaking with Sandy Lin, a MIT Sloan alum friend of mine, and learned that Saint Anselm is using her companyâ€™s Glossi software to showcase their social media content. I connected with Jack Morris to ask him more about Saint Anselmâ€™s digital media strategy. Jack is the Director of Digital Communications for Saint Anselm College in Manchester, NH where he is responsible for developing the online branding and strategy as well as creating new and unique online products to help increase enrollment and alumni engagement. Jack was previously a senior editor at City Search and Managing Editor of AOL Local. Essay on what university presses should do. I owe a huge debt to university presses. They published my books -- knowing they would make no money on them. That selfless act won me tenure at an excellent university.

My debt does not end there. I run a high-minded enterprise that broadcasts interviews with academic authors of new academic titles. The university presses send my little shop scads of free books. Should Your Small Business Join Tumblr? A Conversation With Bill Gates - Technology. By Jeffrey R. Young Bill Gates never finished college, but he is one of the single most powerful figures shaping higher education today. That influence comes through the Bill & Melinda Gates Foundation, perhaps the world's richest philanthropy, which he co-chairs and which has made education one of its key missions. The Chronicle sat down with Mr. 3 Out of 4 Americans Call Higher Education a Right - The Ticker.

Social Media Emerges as Important Part of Graduation Ceremonies. Students are increasingly encouraged to document their graduations through social media.In the past, students were told to leave their cellphones at home during their graduation ceremonies as they quietly waited to recieve their bachelor's degree. This is no longer the case, as students not only bring their smartphones to their graduation ceremonies, but are encouraged to use them to tweet, check in and update their status. Students who graduated from the University of Wisconsin-Madison, for example, were asked to tweet photos of their ceremonies and use the hashtag "#UWgrad," the school's website states. The university then collected their favorite photos and added them to a special section on its website.

Will Stanford and Silicon Valley Transform Education? Stanford University is so startlingly paradisial, so fragrant and sunny, it’s as if you could eat from the trees and live happily forever. Students ride their bikes through manicured quads, past blooming flowers and statues by Rodin, to buildings named for benefactors like Gates, Hewlett, and Packard. Everyone seems happy, though there is a well-known phenomenon called the “Stanford duck syndrome”: students seem cheerful, but all the while they are furiously paddling their legs to stay afloat. After online petition, bank forgives dead student's loans. KeyBank will now take a case-by-case approach in deciding whether to collect when a student loan debtor dies, almost certainly a response to a Change.org petition that criticized the lender for not forgiving tens of thousands of dollars in loans made to a late Rutgers University student.

Job hopes on the rise for college graduates. Boston.com - Boston, MA news, breaking news, sports, video. Facebook Groups for Schools Raises Concerns. Colleges Try to Find Their Voices on Pinterest. April 13, 2012|Ryan Lytle | U.S. News & World Report. A President Surveys the Future of Liberal-Arts Colleges - Head Count. Column on Twitter and scholarly citation. How Will Facebook’s New Page Changes Affect Higher Ed? According to Ad Age, Facebook will bring Timeline to Brand Pages by the end of this month. These changes will mimic the profile change announced at the F8 conference and although Facebook won’t comment on specific details, a spokesperson confirmed they plan on making Pages more consistent with Timeline by the end of February. Higher Ed’s Love/Hate Relationship With Facebook. Campus-themed Internet memes go viral. With roots in the evolutionary biology of Richard Dawkins, meme theory is something a student might expect to learn about while in class rather than killing time on Facebook.

We’re ripe for a great disruption in higher education. The Noble Lecture That's More Than a Speech - Commentary. By David W. How the University of New Hampshire Manages Social Media. FollowEDU - A Searchable Directory of Social Media Users in Higher Education. The State of College Admissions. Incorporating Video into the College Application Process. Why Everyone is Wrong About Text Messaging. As an admissions tool, text message marketing has a bad rap – a really bad rap. Each new recruitment season brings articles like this recent New York Times piece that dismiss text messaging as either ineffective or unwanted by prospectives. Meet the Innovator: How One School is Changing the Mobile Game. Bostinnovation: Boston Start-ups, Innovation and News Blog.

Walking Out on Education - Innovations. University of Illinois Case - Privacy vs. Press Freedom. At Colleges, the Marketers Are Everywhere. Views: Reconsidering Journalism's Tenure Cocktail. How can a university best use social media for internal communications? Google Analytics Tips, Tricks & Strategy. Wikipedia goes to class. Growing Reach with Facebook Ads. Top 10 YouTube Videos Posted by Colleges, and What They Mean - Wired Campus. Where YouTube EDU Went Wrong (and how it might recover) Bringing Transparency to College Costs. Students that Use Twitter Score Higher GPAs.

Standing Up for the Journalism Degree: It Is Not Useless. News: Saying More With Less. 3-year college degree programs not catching on. Debating the Value of College in America. 85% Of Recent College Grads Will End Up Living With Mom And Dad. Higher Ed Analytics: Give Recommendations, Not Numbers. Infographic: Is Social Media Ruining Students? - Nicholas Jackson - Technology. What Role Does Social Media Play in College Admissions? [INFOGRAPHIC] Building a Student Blogger Program. Teaching the PR pros of tomorrow.