British consumers rate origin of products at same level as price, research from Nielsen says. ​Six-in-ten British consumers cited a brand’s country of origin as one of the most important factors in making a purchase choice. 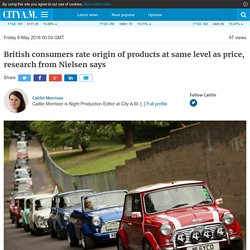 Where a product comes from is as important to consumers, on average, as factors such as its range, price, function and quality, according to Nielsen’s new Global Brand-Origin Survey. The research looks into whether people prefer goods produced by global/multinational brands, which operate in many markets, or those only operating in the respondent’s home country. The results show that 59 per cent of UK respondents said that where a brand is from is at least as important as the product’s benefits, while 58 per cent said origin is at least as important as price and 53 per cent said it was at least as important as quality. However, cars, camera/video equipment and computers/laptops are the categories where British consumers are most likely to prefer global brands over local ones. How to start a coffee shop courses, barista training courses, coffee training. Courses everyday. All our training courses are run by experienced, friendly and knowledgeable barista trainers. 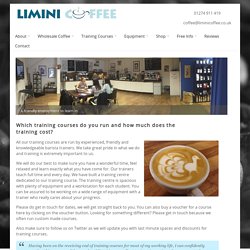 How to start a coffee shop.co.uk  free help with starting a coffee shop - About. Uk.businessinsider. Convenience just got better. Ocado share price jumps as it makes its second-ever profit - and says it is "confident" of signing a big deal. Ocado said it was confident of signing a deal this year (Source: Getty) Ocado has reported its second-ever pre-tax profit, which jumped 65 per cent in the year to the end of November. 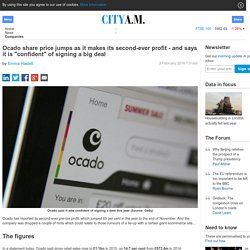 The UK's love affair with salmon and breakup with soup: Three charts showing how our festive shopping habits have changed. Nom: Britons are becoming more enthusiastic about smoked salmon (Source: Getty) If you're planning on sitting down to a breakfast of smoked salmon and scrambled eggs on Christmas morning, you won't be alone - after UK manufacturers reported a 25 per cent increase in salmon sales between 2013 and 2014. 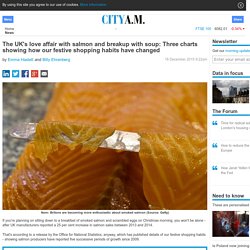 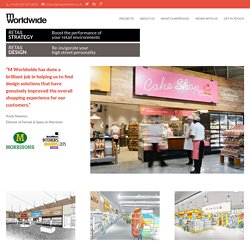 Autumn 2014 saw the launch of the first of three new ‘lab’ store formats, in Weybridge, Surrey. The three stores undergoing makeovers are in Weybridge in Surrey, Birtley in Gateshead, and Milton Keynes. The Format Flex lab stores experiment with tailored formats targeted at different local communities – with differing propositions, ranges, store designs, and environments. Butcher's Shop of the Year winner revealed. Speaking of his victory, Gary Simpson from the award-winning butchers told Meat Trades Journal that his success was a “great morale booster for all the staff”. 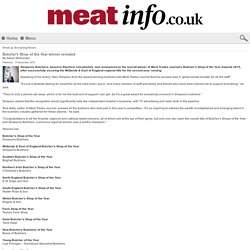 “It’s just a fantastic feeling for myself for all the hard work I put in, and every member of staff and family and friends who have been behind me to support everything,” he said. “They’re only a phone call away, which is for me the best sort of support I can get. Shoppers don't trust healthy eating advice, Waitrose report finds. Consumers have little trust in official healthy eating advice and instead prefer to use their own judgment on what is and isn’t healthy. 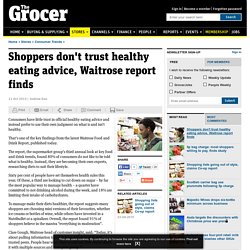 That’s one of the key findings from the latest Waitrose Food and Drink Report, published today. The report, the supermarket group’s third annual look at key food and drink trends, found 80% of consumers do not like to be told what is healthy. Instead, they are becoming their own experts, researching diets to suit their lifestyle. Sixty per cent of people have set themselves health rules this year. Of these, a third are looking to cut down on sugar – by far the most popular way to manage health – a quarter have committed to not drinking alcohol during the week, and 18% are limiting their intake of carbohydrates. Projects » September Hardware Offer. 10 bottles to buy to learn about wine. RIP bread? Nearly half of Brits ditch the bread in their sarnies.

30 Sep 2015 |Amy North More than 40% of Brits have swapped the bread in their sarnies for a sandwich alternative, exclusive research for The Grocer reveals. 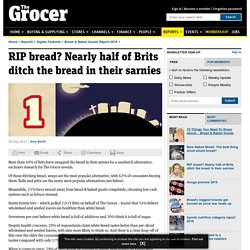 Of those ditching bread, wraps are the most popular alternative, with 62% of consumers buying them. Rolls and pitta are the nexty most popular alternatives (see below). Meanwhile, 15% have moved away from bread & baked goods completely, choosing low-carb options such as lettuce instead. KRS - King Retail Solutions : Portfolio : Whole Foods. A' Design Awards winner in the Interior Space, Retail and Exhibition Design Awards in the category of Interior Space and Exhibition Design. 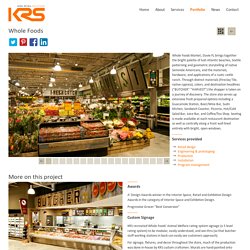 KRS - King Retail Solutions : Portfolio : Fresh St. Farms. The changing dynamics of the grocery sector. There is a complex consumer relationship between price, loyalty to a favourite retailer and convenience. 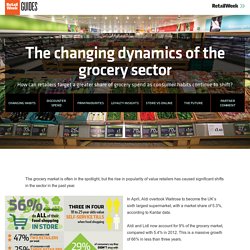 Uk.businessinsider. The competition regulator is to scrutinise allegations that UK supermarkets have duped shoppers out of hundreds of millions of pounds through misleading pricing tactics. Which? Has lodged the first ever super-complaint against the grocery sector after compiling a dossier of “dodgy multi-buys, shrinking products and baffling sales offers” and sending it to the Competition and Markets Authority. The consumer group claims supermarkets are pushing illusory savings and fooling shoppers into choosing products they might not have bought if they knew the full facts. Harbury House - Harbury - Warwickshire.

Kantar Christmas 2015 Supermarket Share Data - Business Insider. Asda overtaken by Sainsbury's as UK's second largest supermarket but big four continue to slide in face of Aldi and Lidl. Asda has lost its title as the second largest supermarket in the UK to Sainsbury's, while discounters Aldi and Lidl continue making gains on the big four. Of the big four - Tesco, Sainsbury’s, Asda and Morrisons - sales fell by the smallest amount at Sainsbury’s, down 0.7 per cent. This helped it regain second place behind Tesco, according to Kantar Worldpanel, a title it last claimed in 2003, while Asda fell into third position. Analysts react to dramatic Tesco announcement. Bruno Monteyne, Bernstein Closing the 43 unprofitable stores makes sense, as there is no point retaining cash draining assets, especially as Tesco likely has a nearby store to pick up at least some of the sales.

These are 43 stores across all store formats (about half Express), and roughly 2% of UK space (0.5 to 1 million sq ft). This is in line with our view that the excess space problem in the UK won’t be solved by large scale store closures. Farm Shop & Deli Show - Welcome. Do you live in Wokingham? Get ready for a long life... - Health News - Health & Families. Public health experts will seek to examine how the market town has successfully targeted its more deprived communities when health inequalities between the poorest and richest people are generally widening. Today's report is the second by Sir Professor Michael Marmot's epidemiology team at University College London which helps evaluate the impact of local and national policies on public health. The team has identified six key areas that most affect people's health and impact on inequalities, including early child development; educational, training and work opportunities; disease prevention; minimum income levels and creating sustainable communities.