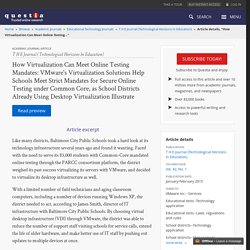 Faced with the need to serve its 83,000 students with Common-Core mandated online testing through the PARCC consortium platform, the district weighed its past success virtualizing its servers with VMware, and decided to virtualize its desktop infrastructure as well. With a limited number of field technicians and aging classroom computers, including a number of devices running Windows XP, the district needed to act, according to James Smith, director of IT infrastructure with Baltimore City Public Schools. By choosing virtual desktop infrastructure (VDI) through VMware, the district was able to reduce the number of support staff visiting schools for service calls, extend the life of older hardware, and make better use of IT staff by pushing out updates to multiple devices at once.

VMware Virtualization Solutions & Cloud Computing. With numerous powerful solution modules for virtualization and cloud computing, VMware facilitates a reliable, efficient and low-maintenance operation of your entire IT infrastructure Image: last blue puzzle piece floating over the rest of a completed puzzle The demands towards performance and reliability of information technology assets are increasing constantly, because IT solutions are constituting an integral part of day-to-day operations in more and more business areas in organizations and enterprises of all kinds. 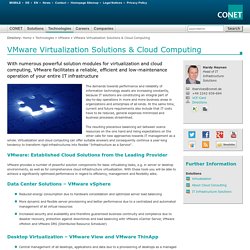 At the same time, current and future requirements also include that IT costs have to be reduced, general expenses minimized and business processes streamlined. VMware and Microsoft are the top virtualization leaders, according to Gartner. Gartner has released its Magic Quadrant report on x86 server virtualization infrastructure for 2015. 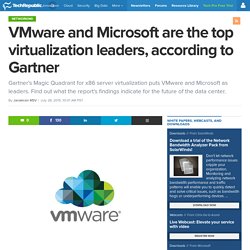 VMware and Microsoft retained their spots in the top right quadrant, which Gartner reserves for the leaders. Desktop Virtualization Solutions with VMware View. Challenge Performance and quality end-user experience can be an issue in large virtual desktop infrastructure (VDI) environments. 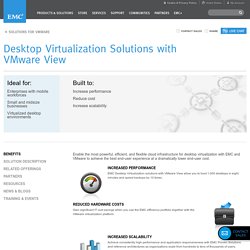 Small changes can have a big impact. For example, a single desktop might execute 15 to 20 input/output (I/O), which the infrastructure can easily support. Adding one more desktop doubles the input/output operations per second (IOPS) requirement on the infrastructure. An enterprise virtual desktop rollout involves thousands of desktops, increasing IOPS by orders of magnitude. Efficient Server Virtualization with VMware vSphere. Reduce IT complexity and cost, and increase reliability and flexibility with Dell and VMware virtualization solutions. 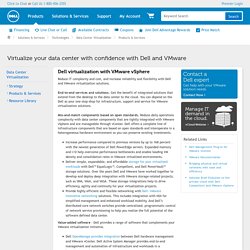 End-to-end services and solutions. Get the benefit of integrated solutions that extend from the desktop to the data center to the cloud. What is virtualization? - Definition from WhatIs.com. Virtualization is the creation of a virtual (rather than actual) version of something, such as an operating system, a server, a storage device or network resources. 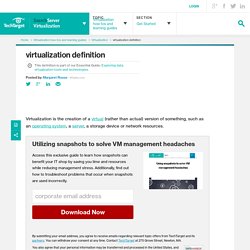 By submitting your email address, you agree to receive emails regarding relevant topic offers from TechTarget and its partners. You can withdraw your consent at any time. Contact TechTarget at 275 Grove Street, Newton, MA. Vmw top5 reasons infographic. Virtual Machines & Multiple Operating Systems: VMware Workstation Player. What is one issue for adopters of vCenter Server Appliance 6? When it comes to running vSphere 6, administrators will have to choose between the Linux-based appliance dubbed... 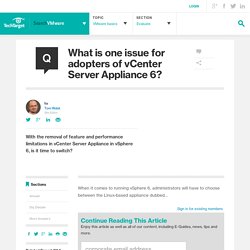 By submitting your email address, you agree to receive emails regarding relevant topic offers from TechTarget and its partners. You can withdraw your consent at any time. Contact TechTarget at 275 Grove Street, Newton, MA. Windows vCenter Server versus vCenter Server Appliance - viktorious.nl - Virtualization & Cloud Computing. Note: The limitations for the VCSA 5.5 are lifted: The integrated vPostgress database will support 100 vSphere hosts and 3.000 virtual machines. 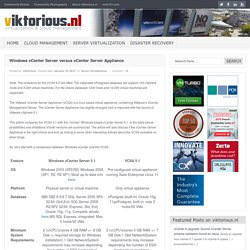 For the Oracle database 1000 hosts and 10.000 virtual machines are supported. The VMware vCenter Server Appliance (VCSA) is a linux based virtual appliance, containing VMware’s vCenter Management Server. The vCenter Server Appliance has slightly changed and is improved with the launch of VMware vSphere 5.1. This article compares the VCSA 5.1 with the “normal” Windows based vCenter Server 5.1. In the table below possibilities and limitations of both versions are summarized. vCenter Server: physical or virtual? - vInfrastructure Blog. This post is also available in: Italian vCenter Server vDesign: Physical vs Virtual Machine. 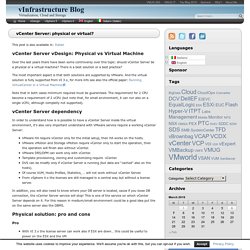 First look: VMware vSphere 6 keeps its edge. In the not so distant past, VMware held a long and commanding lead in the server virtualization space, offering core features that were simply unmatched by the competition. 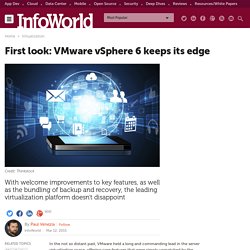 In the past few years, however, competition in virtualization has been fierce, the competitors have drawn near, and VMware has been left with fewer ways to distinguish itself. The competition may have grown over the years, and VMware may not enjoy quite as large a lead as it once did -- but it still enjoys a lead. With useful improvements to a number of key features, as well as the bundling of functions such as backup and recovery that were previously available separately, vSphere 6 is a worthy addition to the vSphere line. That said, some of the major advances in this version, such as long-distance vMotion, will matter most to larger vSphere shops. Big changes in vSphere 6 VMware vSphere 6 offers advances in the previously existing Fault Tolerance feature. Long-distance vMotion. Review: VMware's vCenter Operations Manager lightens the load.

One of the downsides to virtualization is the relative complexity of system monitoring. Traditional monitoring systems are well tuned for physical servers, but they can run into issues in the virtual world. When servers move freely between physical hosts, it can be a challenge to keep track of them. Also, visibility at every layer of the stack is a tough nut to crack. What is VMware VCenter Server? - Definition from Techopedia. VCenter Server is installed at the primary server of a virtualized data center and operates as the virtualization or virtual machine manager for that environment. It also provides data center administrators and a central management console to manage all the system's virtual machines.

Virtual center provides statistical information about the resource use of each virtual machine and provisions the ability to scale and adjust the compute, memory, storage and other resource management functions from a central application. It manages the performance of each virtual machine against specified benchmarks, and optimizes resources wherever required to provide consistent efficiency throughout the networked virtual architecture. Difference between vSphere, ESXi and vCenter. What is VMware vCenter Server? VMware vCenter Server, formerly known as VirtualCenter, is the centralized management tool for the vSphere suite.... By submitting your email address, you agree to receive emails regarding relevant topic offers from TechTarget and its partners.

You can withdraw your consent at any time. Contact TechTarget at 275 Grove Street, Newton, MA. You also agree that your personal information may be transferred and processed in the United States, and that you have read and agree to the Terms of Use and the Privacy Policy. VMware vCenter Server allows for the management of multiple ESX servers and virtual machines (VMs) from different ESX servers through a single console application. First look: VMware vSphere 6 keeps its edge. What is VMware vSphere? - Definition from WhatIs.com. VMware vSphere is the brand name for VMware's suite of virtualization products. Before 2009, VMware vSphere was known as VMware Infrastructure.

By submitting your email address, you agree to receive emails regarding relevant topic offers from TechTarget and its partners. Server Virtualization with VMware vSphere. Virtualization in the trenches with VMware, Part 1: Basics and benefits. IT in the enterprise is as much about technology as it is about people, processes, and business needs. In a five-part series, we will cover some of the challenges faced when trying to design and deploy a virtualization platform for a sizable enterprise and migrate its infrastructure into the cloud. This usually ends up being a far larger undertaking than imagined, partly due to technical challenges, but mostly due to having to make careful selections at every step of the way.

For reasons I'll cover in a moment, this series focuses on VMware. There are some fantastic alternatives to VMware out there, but VMware was the package that best suited my own company's needs. However, much of the discussion in this series can easily be applied to other virtualization platforms. Product considerations When talking about enterprise environments, it is important to remember that one rarely deals with logical situations. Virtualization benefits: live migration, high availability, and fault tolerance. VMware vSphere basics - "The bits and pieces" In this article, we will explore the various components that make up the VMware vSphere platform, and briefly touch on the most important of these from the perspective of the security professional. Everyone will have had some exposure to virtual technologies in their pentesting adventures.

Due to the proliferation of this technology, it is hard to do a security assessment today without touching a virtualised component of some sort. The forerunner in this area is VMware with their vSphere platform. It has grown over the years into a rather large complicated beast. For those who have scoped or performed a security assessment of a VMware solution will know what I mean. The vSphere platform is not a single application, but rather a suite of different products that VMware sell under a single unified product called vSphere. By far the largest and most important component of vSphere is the ESXi Hypervisor. VMware Virtualization Fundamentals – VMware Server and VMware ESXi. VMware for Beginners: 16 Virtualization Basics - VM Install. White Papers.