Son of The Time Lord Chapter 1: Prologue, a Doctor Who + Harry Potter Crossover fanfic. Disclaimer: I do not own Harry Potter or Doctor Who Godric's Hollow, Halloween 1981 Appearing in her usual fashion the Tardis materialized in front of what used to be the Potter cottage. 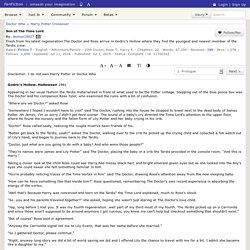 Stepping out of the blue police box was The Doctor and his companion Rose Tyler, who examined the ruins with a bit of confusion. "Where are we Doctor? " asked Rose "Somewhere I hoped I wouldn't have to visit" said The Doctor, rushing into the house he stopped to kneel next to the dead body of James Potter. "Doctor" Rose called sadly, realizing the couple must've been friends of his. Push Comes to Shove Chapter 1, a naruto fanfic. Push Comes to Shove-Part One "Damn it brat! 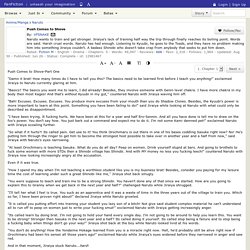 How many times do I have to tell you this? The basics need to be learned first before I teach you anything! " exclaimed Jiraiya to Naruto currently glaring at him. "Basics? "Bah! A Captain And A Madman Chapter 1: TNG 1, a StarTrek: The Next Generation + Doctor Who Crossover fanfic. (Please note; to put things in perspective, this story takes place during the final seasons of The Next Generation, shortly after the episode Violations. 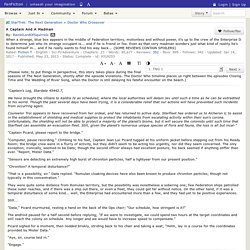 The Doctor Who timeline places us right between the episodes Closing Time and The Wedding of River Song, when the Doctor is still delaying his fateful encounter on the beach.) "Captain's Log, Stardate 45442.7, We have brought the Ullians to Kaldra IV as scheduled, where the local authorities will detain Jev until such a time as he can be extradited to his world. Though the past several days have been trying, it is a considerable relief that our actions will have prevented such incidents from occurring again. Counselor Troi appears to have recovered from her ordeal, and has returned to active duty. Hot Rain Chapter 1, an evangelion fanfic. By Gunman Disclaimer: I do not own Evangelion or it's characters. 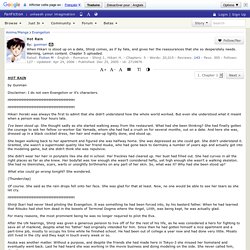 Hikari Horaki was always the first to admit that she didn't understand how the whole world worked. But even she understood what it meant when a person was four hours late. I've been stood up. She thought sadly as she started walking away from the restaurant. She began walking back to her apartment and figured she was halfway home. She didn't wear her hair in ponytails like she did in school. What else could go wrong tonight? The Barista Chapter 1: Default Chapter, a stargate: sg-1 fanfic. Title: The BaristaAuthor: dietcokechicEmail: dietcokechic@hotmail.comSeason: We're going through time here folks. 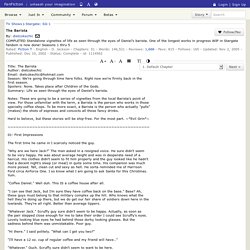 Right now we're firmly back in the first season. Spoilers: None. Takes place after Children of the Gods.Summary: Life as seen through the eyes of Daniel's barista. The Long Jeroma, a startrek: voyager fanfic. The Long Jeroma Title: The Long Jeroma Command Team Author: Stephen. 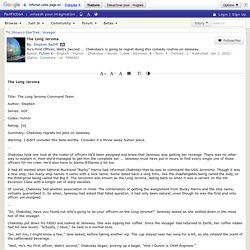 The Rule of Two Chapter 1: Discovery, a star wars fanfic. A/n : I had the genesis of this story floating around in my head for a long while – since I read Matthew Stover's novelization of Revenge of the Sith and was impressed with his writing style and the idea of the Jedi. 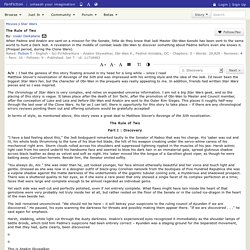 I'd never been the biggest Star Wars fan, but the character of Obi-Wan in the prequels was really appealing to me. In addition, friends had written Star Wars pieces and so I was inspired. The chronology of Star Wars is very complex, and relies on expanded universe information. The Last Terminator, a terminator: sarah connor chronicles fanfic. Disclaimer & Notices Copyright: The Terminator: The Sarah Connor Chronicles characters and concept belong to James Cameron and Josh Friedman. 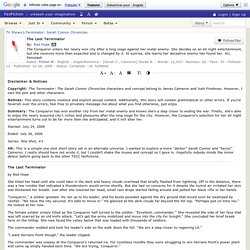 However, I own the plot and other characters. Notices: This story contains violence and explicit sexual content. Additionally, this story will contain grammatical or other errors. If you're feverish over the errors, feel free to privately message me about what you find otherwise, just enjoy. Summary: The Conqueror has won another city from her metal enemy and knows she's a step closer to ending the war. Drive You Mild Chapter 1: part 1, a star wars fanfic. Title: Drive You MildSummary: How do two powerful, individualistic people who were formerly enemies unite? 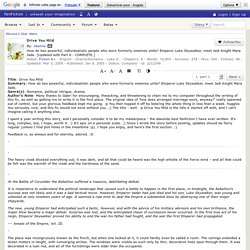 Emperor Luke Skywalker, meet Jedi Knight Mara Jade.Genre(s): Romance, political intrigue, drama.Author's Note: Many thanks to Gabri for encouraging, thwacking, and threatening to chain me to my computer throughout the writing of this fic, as well as getting me to write it in the first place. The original idea of 'how does arranged marriage work, anyway? ' really spawned out of control, but your glorious feedback kept me going. :p You then topped it off by beta'ing the whole thing in less than a week. huggles You seriously rock, and this fic would not exist without you. ;) The title - well. :p Drive You Mild is the title it started off with, and I can't imagine calling it anything else. Symbols Chapter 1 - Padawan Skywalker, a star wars fanfic. Title: SymbolsGenre: Romance, AngstCharacters: Luke/Mara, Anakin/Padma, Leia/Han, Rogue Squadron, OCsTimeframe: The original movies didn't happen, as you will see from the first chapter, but this starts, date wise, about when Endor would have happened and then goes on a few years after. 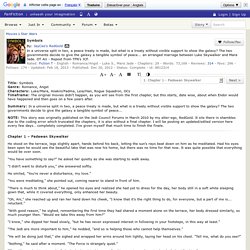 Summary: In a universe split in two, a peace treaty is made, but what is a treaty without visible support to show the galaxy? The two governments decide to give the galaxy a tangible symbol of peace... NOTE: This story was originally published on the Jedi Council Forums in March 2010 by my alter-ego, RedGold.

It sits there in shambles due to the coding error which truncated the chapters, it is also without a final chapter. I will be posting an updated/edited version here every few days… completely completed. Fool's Gold Chapter 1, an a song of ice and fire fanfic. Fool's Gold AU: I'm not sure where I'm headed with this. Probably a series of short interwoven scenes spanning several years. Cersei marries Eddard stark. War happens, anyway.

That's the basic idea. Sibling Revelry Chapter 8, a star wars fanfic. A/N: Sadly, all, this is the end. If it's any consolation this chapter is one of the longer ones. It's been a fun ride! Thank you very much to all my readers, and especially to my reviewers; you make the writing and revising worth it. :) One more shoutout to my longsuffering beta Mathematica. Strife-Sensei Chapter 1, a Final Fantasy VII + Naruto Crossover fanfic. There were two jounin left after every other team had been assigned their sensei, and only one team left. Team Seven. No one wanted to take Team Seven. The Path of a Jedi Chapter 1: Prologue, a star wars fanfic. I corrected a few mistakes. Thanks to phantom-jedi1 for the beta :) The path of a Jedi Book I: A new life, Part I: From the beginning Time period: Jedi Apprentice to TPM and after itRating: T, to be secureSpoilers: Definitely, all moviesDisclaimer: Own nothing.

Everything belongs to George Lucas. The Force's Negotiator Chapter 1, a star wars fanfic. Disclaimer: NOT MINE! Now that that's out of the way, This was a homework assignment for my media writing class. The writing prompt was: Take a popular story and change something, be it character death, or time travel, or era shifting. Then follow the story line to a new ending.

I chose to parody the very popular story type: Obi-Wan get killed only to wake up back in time. I love this story type but I think it really needs to be aped just a bit. Obi-Wan ignited his old but trusted lightsaber for what he hoped would be the last time. "I've been waiting for you Obi-Wan, we meet again at last. Family Business, a Buffy: The Vampire Slayer + Ghostbusters Crossover fanfic. Hail and Farewell Chapter 1: Hail and Farewell, a doctor who fanfic. Hail and FarewellFor Nicholas(Set in my RRAU) Black Dawn, a sleeping beauty fanfic. I Do Not Own Sleeping Beauty The dark fairy Maleficent sat on her throne, contemplating how to proceed. King Stefan and his wife Leah had broken their agreement with her. In exchange for not causing harm to them or their Kingdom, they were to show her the respect she was due. This included inviting her to various important functions. Strife-Sensei Chapter 1, a Final Fantasy VII + Naruto Crossover fanfic. The Unknown Chapter 1: Walking into the Unknown, a percy jackson and the olympians fanfic.

A/N: So I got a lot of inspiration for this from all the stories I have been reading with Pertemis and I came up with this. Please give me your opinions. A/U: Annabeth and Percy never loved each other; it was a childhood crush that was not acted on. In the end of TLO Annabeth tells Luke that she loved him. Yoda's Shadow Chapter 1: And they are there, a star wars fanfic. I DID NOT WRITE THIS. Silverpenlight did, as my Christmas present, because SHE IS MY FAVORITE. She no longer uses a writing journal and didn't want to put it in a public post on her own journal, so I have her permission to post it here so that I can brag about its amazingness to people. It is fan fiction. Based on We've Got Work to Do from Threadless.

Love Is Blind Chapter 1, a frozen fanfic. Her Last mission Chapter 1, a halo fanfic. I don't own Halo. This story takes place after the end of Halo 3 with some brief references to some of the halo novels and to the episode in Halo Legends with Cortana. Elite: The Dark Wheel. From the moment that the trading ship, Avalonia, slipped its orbital berth above the planet Lave, and began to manoeuvre for the hyperspace jump point, its measureable life-span, and that of one of its two-man crew, was exactly eighteen minutes.

The space station gently span away into the shadows and the small Ophidian class vessel shuddered as its motors angled it round towards the Faraway jump. The Prisoner Chapter 1, a sleeping beauty fanfic. A/N: Edited! It was long overdue. Nothing significant changed, just some phrasing problems and a bit of description that I somehow just left out. Lucinda's Weekend, a St. Trinian's + Sofia the First Crossover fanfic. Does the Doctor Know Where His Towel Is? by AstroGirl. Sunnydale Lost - TardisIsTheOnlyWayToTravel - Buffy the Vampire Slayer, Biblical Mythology, Nightside Series - Simon R. Green.