Account.elderscrollsonline. ESO Dragonknight Best Stats Guide: Stamina, Magicka, or Health? One of the biggest mysteries to new Dragonknights in Elder Scrolls Online is which of the three attributes serves the Dragonknight the best? 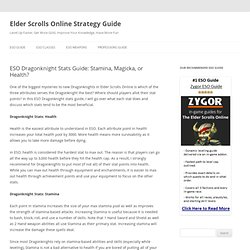 Where should players allot their stat points? In this ESO Dragonknight stats guide, I will go over what each stat does and discuss which stats tend to be the most beneficial. Dragonknight Stats: Health Health is the easiest attribute to understand in ESO. Each attribute point in health increases your total health pool by 3000. In ESO, health is considered the hardest stat to max out. Dragonknight Stats: Stamina Each point in stamina increases the size of your max stamina pool as well as improves the strength of stamina-based attacks. 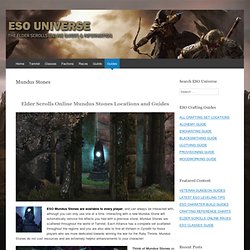 Interacting with a new Mundus Stone will automatically remove the effects you had with a previous stone. Mundus Stones are scattered throughout the world of Tamriel. Each Alliance has a complete set scattered throughout the regions and you are also able to find all thirteen in Cyrodiil for those players who are more dedicated towards winning the war for the Ruby Throne. Mundus Stones do not cost resources and are extremely helpful enhancements to your character! Think of Mundus Stones as another set of enchants you can change whenever you feel like it. Changing Stones – Changing the buff is easy, as long as you have some exploring under your belt. ESO Treasure Map Locations - Tamriel Journal. 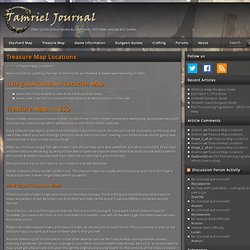 If some zones are disabled, it means we’re working on them. Using the Treasure Location Map Select the zone you wish to view from the drop-down menu.Hover over a red icon or a treasure map name to show its location on the map. Clothing (by armor weight) - ESO Fashion. Armor - Teso Tools Wiki. ESO Auridon Quest Guide. ESO Armor Set Bonus' Version 2.xls. Multitwitch. Introducing Ever1ast's DPS and Efficiency Calculator. ESO AH: A Cross-Faction Auction House & Trade Site for The Elder Scrolls Online. Comparing Racial Passives. In The Elder Scrolls Online every race has its own skill line. 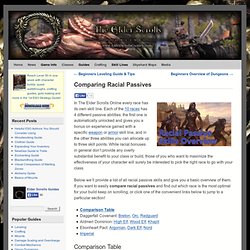 Each of the 10 races has 4 different passive abilities: the first one is automatically unlocked and gives you a bonus on experience gained with a specific weapon or armor skill line, and in the other three abilities you can allocate up to three skill points. While racial bonuses in general don’t provide any overly substantial benefit to your class or build, those of you who want to maximize the effectiveness of your character will surely be interested to pick the right race to go with your class. Below we’ll provide a list of all racial passive skills and give you a basic overview of them. If you want to easily compare racial passives and find out which race is the most optimal for your build keep on scrolling, or click one of the convenient links below to jump to a particular section! Comparison Table The table below should give you the necessary info at a glance. (download table as image) Daggerfall Covenant Breton Orc. Beginners Leveling Guide & Tips. One of the most important things for players in any MMORPG is of course leveling. 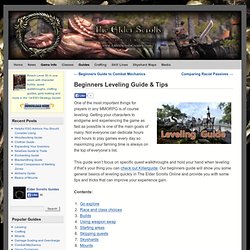 Getting your characters to endgame and experiencing the game as fast as possible is one of the main goals of many. Not everyone can dedicate hours and hours to play games every day so maximizing your farming time is always on the top of everyone’s list. This guide won’t focus on specific quest walkthroughs and hold your hand when leveling: if that’s your thing you can check out Killerguide. ESO Alchemy Simulator - Tamriel Journal. Home » Alchemy Simulator Potion Chosen ingredients have no common traits. 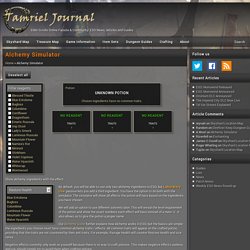 Show alchemy ingredients with the effect: Blue EntolomaBuglossColumbineLuminous RussulaMountain FlowerWater Hyacinth By default, you will be able to use only two alchemy ingredients in ESO, but Laboratory Use passive lets you add a third ingredient. We will add an option to use different solvents later. The Elder Scrolls Online Alchemy Guide - Tamriel Journal. Home » Crafting and professions » Alchemy In Elder Scrolls Online, Alchemy is a crafting profession which produces various different potions, much like in the previous Elder Scrolls games. 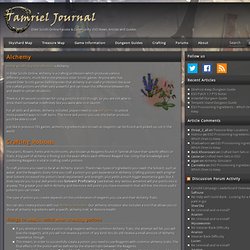 Anyone who has played Elder Scrolls games before knows that alchemy is an useful profession because the crafted potions are often very powerful and can mean the difference between life and death in certain situations. There is a 30-second cooldown for using potions in ESO though, so you are not able to drink them somewhat indefinitely like you were able to in Skyrim. For all skills and abilities, Alchemy included, players need to use skill points to unlock more powerful ways to craft items. The more skill points you use, the better products you’ll be able to craft. Just like in previous TES games, alchemy ingredients also known as reagents can be found and picked up out in the world. 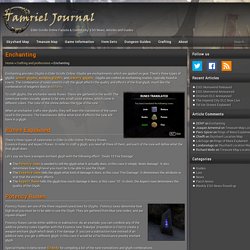 Glyphs are enchantments which are applied on gear. There’s three types of glyphs: armor glyphs, weapon glyphs, and jewelry glyphs . Glyphs are crafted at enchanting station, typically found in towns. The combination of runes used to craft the glyph affects the quality and effects of the final glyph, much like the combination of reagents does in Alchemy. 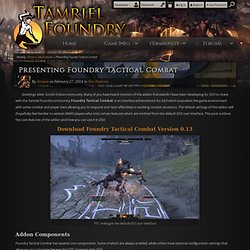 Many of you have heard mention of the addon framework I have been developing for ESO to share with the Tamriel Foundry community. Foundry Tactical Combat is an interface enhancement for ESO which populates the game environment with active combat and player data allowing you to respond and react effectively to evolving combat situations.

The default settings of this addon will (hopefully) feel familiar to veteran MMO players who miss certain features which are omitted from the default ESO user interface. This post outlines the core features of the addon and how you can use it in ESO. Download Foundry Tactical Combat Version 0.13. GreyAB - Profile - Esohead - Elder Scrolls Online Database. Skill Calculator - Esohead - Elder Scrolls Online Database. ESO Skyshards - TESO Life. ESO Lorebook Locations Map. Lorebooks are the only way to progress Mages Guild skill line. 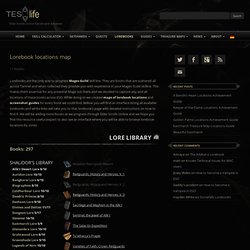 They are books that are scattered all across Tamriel and when collected they provide you with experience in your Mages Guild skilline. This makes them essential for any potential Mage out there and we decided to capture any and all locations of these books across ESO. While doing so we created maps of lorebook locations and screenshot guides for every book we could find.