Engineer Things - Get Most of Them at These 3 Locations. This post is intended to assist you by speeding up the acquisition of requisite data and materials for engineering modifications. 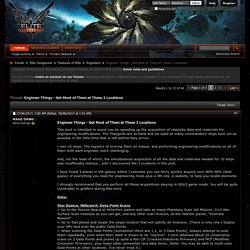 The Thargoids are at hand and we need as many commanders' ships built out as possible in the little time that is left before they arrive.I own 10 ships. The logistics of moving them en masse, and performing engineering modifications on all of them with each engineer, were challenging. And, not the least of which, the simultaneous acquisition of all the data and materials needed for 10 ships was insufferably tedious...until I discovered the 3 locations in this post. I have found 3 places in the galaxy where I estimate you can fairly quickly acquire over 80%-90% (best guess) of everything you need for engineering mods plus a 4th site, a website, to help you locate elements. 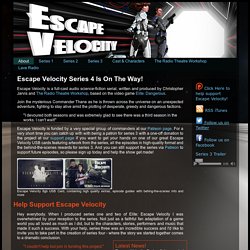 Escape Velocity is a full-cast audio science-fiction serial, written and produced by Christopher Jarvis and The Radio Theatre Workshop, based on the video game Elite: Dangerous. Join the mysterious Commander Thane as he is thrown across the universe on an unexpected adventure, fighting to stay alive amid the plotting of desperate, greedy and dangerous factions. "I devoured both seasons and was extremely glad to see there was a third season in the works. I can't wait! " Escape Velocity is funded by a very special group of commanders at our Patreon page.

Escape Velocity 8gb USB Card, containing high quality extras, episode guides with behing-the-scenes info and more Help Support Escape Velocity Hey everybody. New Player Guide - Fast Money - Rare Resource Trade Route : EliteDangerous. Short Rare Route for new players needing cash. - Elite: Dangerous PvE - Mobius. As soon as you feel comfortable with SC, Jumps, Navigation and you have a decent jump range distance (15LY or greater imo) etc, try going to one of the rare route starports, I have posted some on the forums here. the one I normally do however takes about an hour to an 1 hr 30. 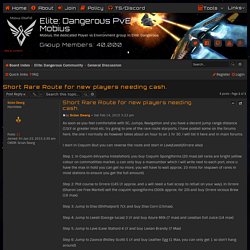 I will list it here and in main forums. I start in Coquim (but you can reverse the route and start in Lave/Leesti/Orrere also) Step 1: In Coquim (Hiryama Installation), you buy Coquim Spongiforms (20 max) (all rares are bright yellow colour on commodities market, u can only buy a maxnumber which I will write next to each port, once u have the max in hold you can get no more, you will have to wait approx. 10 mins for respawn of rares in most stations to ensure you get the full amount). Fangs - Elite: Dangerous. You can Manually Customize the GUI Colors (Instructions) : EliteDangerous. Elite: Dangerous HUD colour theme editor. Use the sliders or number inputs to adjust the colour transformation matrix. 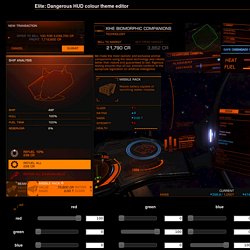 The input red/green/blue are the default HUD colours and the output red/green/blue are what is shown. For example, putting 100% of input red to input blue (and nowhere else) makes everything that is red by default show as blue. Copypaste the generated configuration snippet on the left into the file GraphicsConfiguration.xml, replacing (only) the similar lines inside the <GUIColour><Default> tags. Note that this file is overwritten when the game updates, so you will need to re-apply your theme every time that happens. The file GraphicsConfigurationOverride.xml can be used to make the theme persistent (see example). 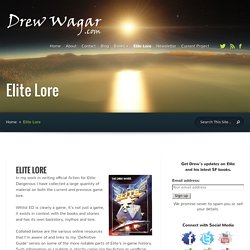 Whilst ED is clearly a game, it’s not just a game, it exists in context with the books and stories and has its own backstory, mythos and lore. Collated below are the various online resources that I’m aware of and links to my ‘Definitive Guide’ series on some of the more notable parts of Elite’s in-game history. Such information as I publish is strictly canon (no fan-fiction or unofficial content) and may be limited by the NDA I operate under from Frontier Developments. I hope you find the information useful. If you have ideas for future ‘definitive guides’ please let me know.

Definitive Guides: Generation Ships - Legends abound about the mysterious ships that left Earth so long ago to settle new worlds.Raxxla – A fable as old as space travel itself, a mystery and an enigma: Raxxla. Bounty Hunting Locations & Primer - Elite: Dangerous PvE. The Kill Warrant Scanner is a Bounty Hunters best friend, while it’s not required to go Bounty Hunting, you’ll make a lot more money when using it. 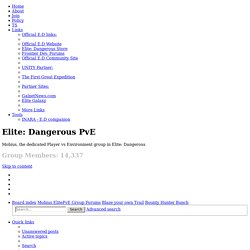 It’s a device that you have to purchase and it equips to one of the utility mounts on your ship. It allows you to scan a ship, without firing on it, and see if they are wanted in other systems. Sometimes a ship marked Clean in the system your in is wanted in another system, in which case if you kill it you’ll get the bounty (But be careful about doing this is non-Anarchy Systems or you risk getting a bounty yourself).

Or if the ship is Wanted you can potentially increase the bounty by seeing if they are wanted in other systems in addition to the current one. ELITE GALAXY ONLINE. Commander ChaosWulff. The 65,340Ly Destination : EliteDangerous. Galactic Mapping - A Community Project. Frontier Developments. Call of the wild - A list of pristine metallic rings. Hello there fellow gold seekers! 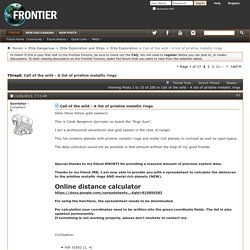 This is Cmdr Benjamin Gorrister on board the "Ergo Sum".I am a professional adventurer and gold seeker in the rank of ranger.This list contains planets with pristine metallic rings and metal rich planets in civilized as well as open space.The data collection would not be possible in that amount without the help of my good friends.Special thanks to my friend RMORTI for providing a massive amount of precious system data.Thanks to my friend JRB, I am now able to provide you with a spreadsheet to calculate the distances to the pristine metallic rings AND metal rich planets (NEW).Online distance using the functions, the spreadsheet needs to be downloaded.For calculation your coordinates need to be written into the green coordinate fields. The list is also updated permanently. 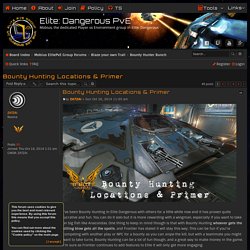 It’s a device that you have to purchase and it equips to one of the utility mounts on your ship. It allows you to scan a ship, without firing on it, and see if they are wanted in other systems. Sometimes a ship marked Clean in the system your in is wanted in another system, in which case if you kill it you’ll get the bounty (But be careful about doing this is non-Anarchy Systems or you risk getting a bounty yourself). Or if the ship is Wanted you can potentially increase the bounty by seeing if they are wanted in other systems in addition to the current one. CMDR Club: Jump Routes. Elite: Dangerous - How to Outfit your Cobra Mk 3 for More Profit in Trading! Elite: Dangerous - How to deal with interdictions. 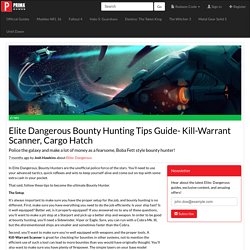 You’ll need to use your advanced tactics, quick reflexes and wits to keep yourself alive and come out on top with some extra cash in your pocket. That said, follow these tips to become the ultimate Bounty Hunter. The Setup It’s always important to make sure you have the proper setup for the job, and bounty hunting is no different. First, make sure you have everything you need to do the job efficiently. Second, you’ll want to make sure you’re well equipped with weapons and the proper tools.

Things to know The most important thing about bounty hunting is knowing when to keep fighting and when it’s time to tuck tail and run. Tip: The quickest way to escape a fight is to turn Flight Assist off and boost in a straight line. Some other important things to know include what key activates your Cargo Scoop, as well as the location of the nearest High Tech Starport for making ship upgrades. A Sidewinder and 1,000 Credits: A Beginners Guide to Getting Rich in Elite: Dangerous : EliteDangerous. 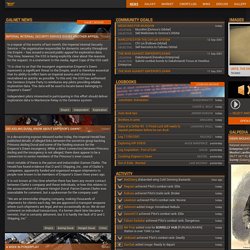 New interstellar agreements have extended the Alliance’s areas of governance, while diligent legislative reports allowed the Prime Minister to effectively withstand attempts to undermine his authority. The Alliance now looks forward to a period of unprecedented prosperity. Zachary Hudson’s fleets weathered a massive storm this week, while successfully beating back the highest levels opposition the Federation’s President has seen. As defensive fleets executed their orders with diligence, offensive task forces pressed on the pain points of the Federation’s rivals.

Hudson has made it clear that challenges to his authority will not be tolerated. Felicia Winters has consistently proven her ability to defy the odds, and this week was no exception. Aisling Duval’s publicity machine suffered minor setbacks late this week, resulting in a drop in standing. Junglebiscuit Elite Dangerous Stat Sig Generated.

Single Route Finder - eddb. Rares-Circuit-1.pdf. A complete guide for beginner Bounty Hunters. : EliteDangerous. You can Manually Customize the GUI Colors (Instructions) : EliteDangerous. Create Your Own Pilot's License - GalnetNews.comGalnetNews.com. Whilst not a hint or a tip, we saw this great little tool and just had to share. Harvey, the original creator of the Pilot’s License in PSD format, is a bit of a roleplayer and had some free time to make this Pilot’s License template, initially as a signature image. This was then taken by Xian and transferred onto an on-line tool. We’ve included both versions, depending upon your preference. We think you will see from the example below, it’s a cool tool and produces a nice, currently unique graphic image: Create Your Own Pilot’s License The online (and slightly simpler) version can be found here: PSD versions of the template can be found as shown below:

Frontier Forums. Elite Dangerous Wallpapers Now Available! Change HUD Colour *tweak* Instead of hijacking the other thread. I have found a way to change the HUD in game... (DEVS if your not happy with this then please lock the thread or remove it!) PLAYERS! This is AT YOUR OWN RISK! ALWAYS KEEP A BACK UP OF THE ORIGINAL!! Elite: Dangerous HUD colour theme editor. Problem loading page. E:D Shipyard - Sidewinder. Elite: Dangerous Guide - How to Mine to Success - Page 6 of 6. Elite: Dangerous - Mining Guide & Tutorial - Outfitting & How to Find the Best Pristine Ore. Galaxy map routing too slow? Elite Copilot has quick routing and voice navigation! Elite: Dangerous Beginners Tips– Getting Started in the Dark of Space. Trade helper (Best) - Elite & Dangerous Roguey. Thrudds Elite:Dangerous Tools - Thrudd's Elite:Dangerous Tools. Elite: Dangerous.