Out of the Night Chapter 1, a Harry Potter + Hellsing Crossover fanfic. The war was over, the final battle won, and now the real hard work began. 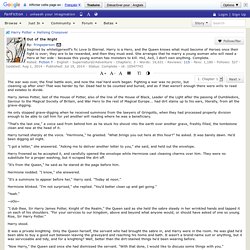 Fighting a war was no picnic, but cleaning up after one? That was harder by far. Dead had to be counted and buried, and as if that weren't enough there were wills to read and estates to divide. Harry James Potter, last of the House of Potter, also of the line of the House of Black, Leader of the Light after the passing of Dumbledore, Saviour to the Magical Society of Britain, and War Hero to the rest of Magical Europe... had dirt stains up to his ears, literally, from all the grave-digging. He only stopped grave-digging when he received summons from the lawyers of Gringotts, when they had processed property division enough to be able to call him for yet another will reading where he was a beneficiary.

"That's the last one," a voice said from behind him as he stuck his shovel into the earth over another grave, freshly filled, the tombstone clean and new at the head of it. Harry turned sharply at the voice. "Yeah. " Evolution Shinji Chapter 1, an Evangelion + X-Men: Evolution Crossover fanfic. Evolution Shinji Disclaimer; I do not own Neon Genesis Evangelion or X-Men Evolution. 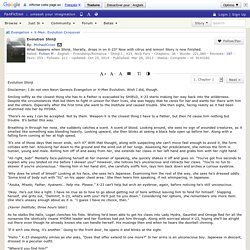 Wish I did, though. Smiling softly as the closest thing she has to a Father is evacuated by SHIELD, X-23 starts making her way back into the wilderness. Despite the circumstances that led them to fight in unison for their lives, she was happy that he cares for her and wants her there with him and the others. Especially after the first time she went to the Institute and caused trouble. 'There's no way I can be accepted. Breathing in through her nose, she suddenly catches a scent. The Pursuit of Perfection Chapter 1: The Guardian, a Buffy: The Vampire Slayer + StarTrek: Voyager Crossover fanfic. Chapter One: The Guardian Captain's Log, Stardate 51904.7: We've detected a transmission coming from an M-class planet three light years from our current position. 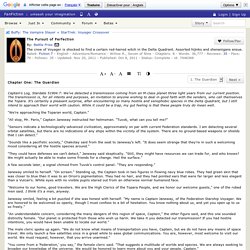 The transmission is, for all intents and purposes, an invitation to anyone wishing to deal in good faith with the senders, who call themselves the Topara. It's certainly a pleasant surprise, after encountering so many hostile and xenophobic species in the Delta Quadrant, but I still intend to approach their world with caution. While it could be a trap, my gut feeling is that these people truly do mean well. "We're approaching the Toparan world, Captain. " "All stop, Mr. "Sensors indicate a technologically-advanced civilization, approximately on par with current Federation standards. Harry's Raven Chapter 1: Harry Meet the Titans, a Harry Potter + Teen Titans Crossover fanfic. A/N: I don't own the characters, I'm just playing in the creator's sandbox. 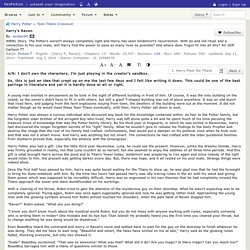 So, this is just an idea that crept up on me the last few days and I felt like writing it down. This could be one of the best pairings in literature and yet it is hardly done at all or right. A young man snorted in amusement as he took in the sight of different building in front of him. Of course, it was the only building on the island, so the owner's didn't have to fit in with others, but still a giant T-shaped building was out of place anywhere. It was an odd bunch that lived here, and judging from the faint explosions issuing from town, the dwellers of the building were out at the moment. Harry Potter was always a curious individual who devoured any book for the knowledge contained within. Trinity Chapter 1, a DC Superheroes + X-Men Crossover fanfic.

Chapter One: The Boy Who Wasn't. 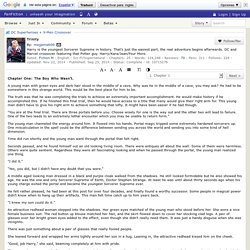 A young man with green eyes and dark hair stood in the middle of a cave. Why was he in the middle of a cave, you may ask? He had to be somewhere in this strange world. This would be the best place for him to be. The truth was that he was completing the trials to achieve an extremely important accomplishment. "You are at the final trial. The Power He Knows Not Chapter 1: Peace, a Harry Potter + Lord of the Rings Crossover fanfic. A/N: Welcome, one and all to an experiment, of sorts. 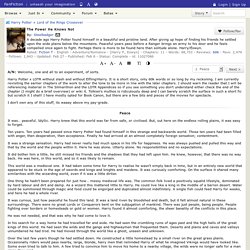 Harry Potter x LOTR without slash and without Elfling! Harry. It is a short story, only 60k words or so long by my reckoning. I am currently revisiting the earlier chapters of the work to alter the tone to be more in line with the later chapters. I should warn the reader that I will be referencing material in The Silmarillion and the LOTR Appendices so if you see something you don't understand either check the end of the chapter (I might do a brief overview) or wiki it.

Falling Skies - Chapter 1 - LockedOwle - Harry Potter - J. K. Rowling, The Avengers. Chapter Text Chapter 1 – Ticking Down There was something almost soothing about being on the edge of an apocalypse, though Harry knew that anyone would think he was crazy if he expressed the thought out loud. 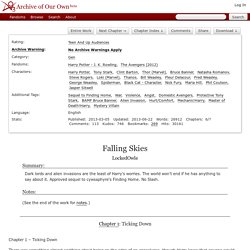 The sense of urgency brought on by impending doom was something that he had lived with for most of his life. He had left when it had grown to be too much, but a part of him, the ‘hero’ part he assumed, had missed it. So if he was caught sprawled in one of the lounge chairs on Tony’s balcony staring out at the skyline with a ruminating smile on his face, that was the reason why. And honestly, he didn’t think that it was anyone’s business but his. Choices, a Harry Potter + Avengers Crossover fanfic. Disclaimer: I do not own anything from Harry Potter or Avengers... 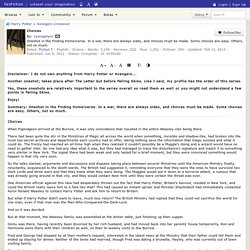 Another oneshot; takes place after The Letter but before Falling Skies. Like I said, my profile has the order of this series. Yes, these oneshots are relatively important to the series overall so read them as well or you might not understand a few points in Falling Skies. Enjoy! Summary: Oneshot in the Finding Home! Choices When Pigwidgeon arrived at the Burrow, it was only coincidence that resulted in the entire Weasley clan being there.

Difference of Opinion, a Harry Potter + Avengers Crossover fanfic. Disclaimer: I do not own anything from Harry Potter or Avengers... 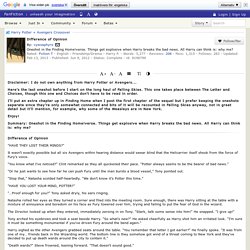 Here's the last oneshot before I start on the long haul of Falling Skies. This one takes place between The Letter and Choices, though this one and Choices don't have to be read in order. I'll put an extra chapter up in Finding Home when I post the first chapter of the sequel but I prefer keeping the oneshots separate since they're only somewhat connected and bits of it will be recounted in Falling Skies anyway, not in great detail but it'll mention, for example, why some of the Weasleys are in New York. Enjoy! The Letter, a Harry Potter + Avengers Crossover fanfic. Disclaimer: I do not own anything from Harry Potter... 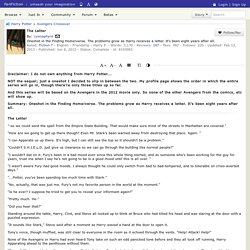 NOT the sequel; just a oneshot I decided to slip in between the two. My profile page shows the order in which the entire series will go in, though there're only three titles up so far. And this series will be based on the Avengers in the 2012 movie only. So none of the other Avengers from the comics, etc will show up. Summary: Oneshot in the Finding Home! Finding Home Chapter 1: To Begin Anew, a Harry Potter + Avengers Crossover fanfic. Disclaimer: I do not own anything from both Harry Potter and Avengers… Summary: When Harry finally accepted the fact that he had stopped aging, ten years had passed and he knew it was time to leave. AU. The general idea of the first two chapters are similar to that of criesofthefallen's Taking Chances.

Check out their story if you have time; it's pretty good. Harry and Harley Chapter 1: The Best Medicine, a Batman + Harry Potter Crossover fanfic. Author's Note: This is going to be an epic tale. And I hope that you will enjoy the ride. Keeping in mind that this is the end of Harry's fifth year. And the ages around him are going to reflect that. This story is rated M. Draw your own conclusions. Banished Destiny Chapter 1: Prologue: A Daring Rescue by Banishment, a Harry Potter + Gundam Wing/AC Crossover fanfic.

Main Characters: H. Potter, H. The War of the Ring Chapter 1: Prologue, a star wars fanfic. Fighting the Dark Lords Chapter 1: Going to Hogwarts, a Star Wars + Harry Potter Crossover fanfic. Disclaimer: I do not own any Star Wars or Harry Potter books, movies, and games Note: first attempted story. A Child Avenged, a Harry Potter + Avengers Crossover fanfic. "Put on the suit, let's go a few rounds," Steve barked at Tony. The tension in the room rose and rose until Bruce found himself drowning under a tidal wave of tension and anger, desperately wishing he could crane his neck for a breath of fresh air, away from the heat and anger that was threatening to wash him away. Then there was a crack like a gunshot and the whole world exploded.

A bright light flashed and Bruce's muscles locked, his legs snapping together and his arms jerking to his sides. He fell hard onto his side and pain exploded behind his eyes. He felt the rapid thumping in his ribcage and every conscious thought running through Bruce's mind was eclipsed by his fear of the Hulk emerging and killing everything on the Helicarrier. The Sentinel: Episode 2 The Shadows of War and Peace Chapter 1, a Star Wars + Harry Potter Crossover fanfic.

A Child Avenged, a Harry Potter + Avengers Crossover fanfic. Deus Ex Machina Chapter 1, a Harry Potter + Avengers Crossover fanfic. Author: The Plot Bunny WhispererTitle: Deus Ex MachinaRating: K+Genre: HumorSummary: (Or - The Time MoD! Harry Got Fed Up and Dealt With Loki Himself, to the Consternation and Confusion of Everyone Else.) Some days, dealing with a bunch of bratty quasi-immortal beings and their temper tantrums just wasn't worth it. Especially when they kept causing him so much extra paperwork.Pairing(s): NoneWarnings: None, unless you count author insanity. Oh, and swearing, I guess.Disclaimer: Don't own, don't care, don't sue.

AN: When I left this site two years ago, someone kindly asked me if I would be willing to post completed or one-shot stories here, because that's what I left behind. Deus Ex Machina(Or - The Time MoD! Five seconds before a dark-cloaked being of indeterminate gender would have crossed the threshold passed its boss's office door, a chill of foreboding went down its spine. New Horizons - Book I - Rising by lucifael.

The Wizard of Harrenhal Chapter 1, a Harry Potter + Game of Thrones Crossover fanfic. The Wizard of Harrenhal A/N: I re-read Book 1 and caught some of the HBO series (along with the far too-few fanfictions in progress), so I got inspired to try my hand at another story. This Game of Thrones / A Song of Ice and Fire story is a cross with the Harry Potter universe, which is much harder than it sounds to pull off. Divine Hallows As Chapter 1, a Harry Potter + Magical Girl Lyrical Nanoha Crossover fanfic. Disclaimer: I own neither Harry Potter nor Mahou Shojou Lyrical Nanoha, in any media form, be it book, manga, anime, or movie.