"'We Have Always Fought': Challenging the 'Women, Cattle and Slaves' Narrative" by Kameron Hurley - A Dribble of Ink. I’m going to tell you a story about llamas. 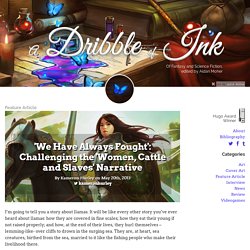 It will be like every other story you’ve ever heard about llamas: how they are covered in fine scales; how they eat their young if not raised properly; and how, at the end of their lives, they hurl themselves – lemming-like- over cliffs to drown in the surging sea. They are, at heart, sea creatures, birthed from the sea, married to it like the fishing people who make their livelihood there.

Every story you hear about llamas is the same. You see it in books: the poor doomed baby llama getting chomped up by its intemperate parent. On television: the massive tide of scaly llamas falling in a great, majestic herd into the sea below. Because you’ve seen this story so many times, because you already know the nature and history of llamas, it sometimes shocks you, of course, to see a llama outside of these media spaces.

So you forget the llamas that don’t fit the narrative you saw in films, books, television – the ones you heard about in the stories. The Story of Feminist Punk in 33 Songs. By Vivien Goldman It’s punk, not spunk. 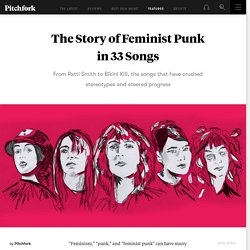 So loaded towards males is the English language, though, that we may have to reinvent our whole vocabulary. Because some of the best words to describe our female punks are phallocentric: “spunky,” “ballsy.” Start calling us “cunts” or “pussies,” though, and it won’t go down so well. Why is a comparison to our vaginas not considered a compliment?

Punk is now acknowledged as the global music of rebellion, alongside hip-hop and reggae. When I started writing in the rock press in the mid-1970s, girl musicians were so rare that, in what may have been the first Women in Rock article, I described a long-haired female guitarist as if she were a unicorn. If We Wrote Men Like We Write Women. Uncategorized Posting these without comment…for now. 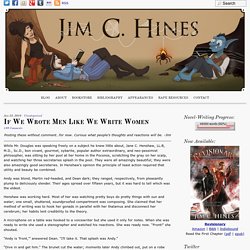 Curious what people’s thoughts and reactions will be. -Jim While Mr. If We Wrote Men Like We Write Women, Part II. Uncategorized Wow. 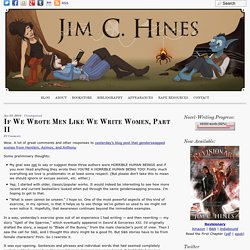 A lot of great comments and other responses to yesterday’s blog post that genderswapped scenes from Heinlein, Asimov, and Anthony. Some preliminary thoughts: My goal was not to say or suggest these three authors were HORRIBLE HUMAN BEINGS and if you ever liked anything they wrote then YOU’RE A HORRIBLE HUMAN BEING TOO! Pretty much everything we love is problematic in at least some respect. Fatal Femininity: Witches in ‘Dragon Age’ & ‘Skyrim’ Mythology and magic were created to account for phenomena otherwise unexplainable by generally accepted knowledge. 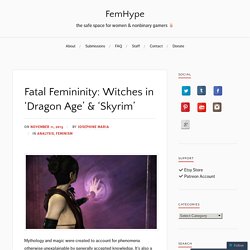 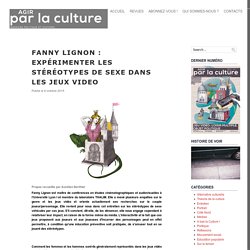 The Trouble with Gender in Larp. While representations of gender have received attention for most media, stories, and games, the topic of gender in live action role-playing games (larps) is particularly important because of the degree of embodiment that is uniquely characteristic of the medium. 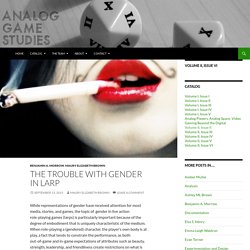 When role-playing a (gendered) character, the player’s own body is at play, a fact that tends to constrain the performance, as both out-of-game and in-game expectations of attributes such as beauty, strength, leadership, and friendliness create restrictions on what is considered an authentic, true, or “real” performance of masculinity or femininity. This standard of believability in larp derives from powerful social norms and thus tends to reify the dominant gender binary of feminine=female and masculine=male as well as heterosexual relationships as the default. First, we will address the theoretical foundations that inform this approach to understanding gender as performance. Monstrous Mothers: The Price of Womanhood in ‘Dragon Age’ 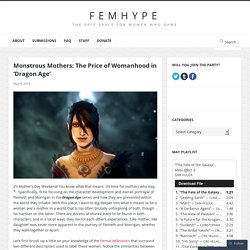 You know what that means: it’s time for mothers who slay. Specifically, I’ll be focusing on the character development and overall portrayal of Flemeth and Morrigan in the Dragon Age series and how they are presented within the world they inhabit. 5 Secret Feminist Easter Eggs You Didn't Notice in 'Portal' The two Portal games are memorable for their clever physics puzzles, funny writing that's been run into the ground by Internet memes, a cooperative campaign that ruins friendships, and a popular female protagonist who doesn't serve as eye candy. 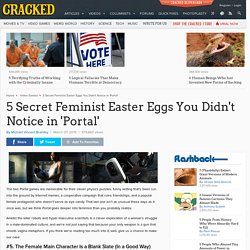 That last one isn't as unusual these days as it once was, but we think Portal goes deeper into feminism than you probably realize. Amidst the killer robots and hyper-masculine scientists is a clever exploration of a woman's struggle in a male-dominated culture, and we're not just saying that because your only weapon is a gun that shoots vagina metaphors. Videogames are afraid of the female body. Game of Thrones is known for its excessive female nudity and gruesome violence. 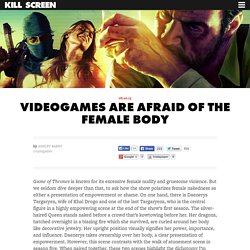 But we seldom dive deeper than that, to ask how the show polarizes female nakedness as either a presentation of empowerment or shame. On one hand, there is Daenerys Targaryen, wife of Khal Drogo and one of the last Targaryens, who is the central figure in a highly empowering scene at the end of the show’s first season. The silver-haired Queen stands naked before a crowd that’s kowtowing before her. Her dragons, hatched overnight in a blazing fire which she survived, are curled around her body like decorative jewelry. Her upright position visually signifies her power, importance, and influence. Teen_girls_play_video_games_but_they_minimize_their_contact_with_other_players. Photo by Mike Watson Images/Thinkstock Chris Suellentrop at Kotaku has posted an in-depth analysis of one of the more interesting findings from a recent Pew Research Center report on teens and technology: Despite sexist stereotypes that cast video games as a male hobby, teen girls love to play them.

Sure, more boys ages 13 to 17 play than girls—84 percent and 59 percent, respectively—but both genders play a lot of games and a lot of different kinds of games. “More than 35 percent of the girls in the Wiseman and Burch study said they play role-playing games,” Suellentrop writes, adding that this is “a larger number than the 32 percent who said they played mobile games.” Ubisoft’s Stance on Female Characters in Assassin’s Creed Unity. Ashley Johnson, the voice of The Last of Us’ Ellie, has criticized Ubisoft over the company’s recent statements about the lack of playable female characters in Assassin’s Creed Unity. “I was like, 'Give me a f***ing break! It's 2014! How many video games do you have to make to realise maybe have an option to have a female be in there?

'” Johnson told Videogamer in an interview. How gender bias in games and geeky movies got there. On Designing Better Women in Games. 2. A woman must still be able to be recognizably feminine, or people will not consider her a woman. So, in the last point, it’s pretty clear that at first glance, most of those women portray some amount of femininity that makes them recognizable as women (even Samus has a small waistline and a noticeable chestplate even under her armor). Genre et Jeu vidéo (2) : Les femmes comme récompenses. Suite de la série inaugurée la semaine dernière par Mar_Lard. Conférence « Sexisme, jeux vidéo et culture geek » It Is Realistic For Women to Fight in Dragon Age. Badass Girls Need Not Apply.

Corrections and clarifications appended. A follow-up story explores the feedback to this one. If there was a single moment that best illustrated my frustration with male-dominated video-game journalism, it happened on December 23 while I listened to the Giant Bomb podcast discuss the best games of 2013. While voting for “Biggest Surprise Game of 2013,” Brad Shoemaker and Jeff Gerstmann have the following exchange about 2013’s Tomb Raider — a reboot of the popular series featuring gaming icon Lara Croft: Bayonetta 2’s Sexless Sexiness and the Fetishization of Domination Through Violence. Some tweets calling Ubisoft out on their bullshit. A Great Big List of Games from E3 with Playable Female Characters. Meanwhile in related galleries thumbnails n of 31 this is some kind of spaceship or something. [View All on One Page] Like many of you, my fellow Weekend Editor Sam Maggs and I were more than a little irked by the Ubisoft kerfuffle earlier this week.

Sam and I did some digging, and we’ve compiled a list for you. Pick Your Poison: Character Creation & The Gender Binary. Any game that allows me to customize eye color, hairstyle, and nose size is the game for me. There’s a reason why I lost literally years of my life playing The Sims 2, and it’s the same reason why I have ten different Inquisitors but only one completed game of Dragon Age: Inquisition. I just love making a wide range of characters, all complete with painstakingly imagined backstories and carefully styled cheekbones. But every time I open up a game with character creation, be it Skyrim or Fallout 3, I’m faced with a horrible choice: man or woman? What I pick here will affect clothing, hairstyles, voice, body shape, and pronouns.

That is an awful lot to have riding on this question considering that, for me, there is no right answer. Of course, not all OCs are meant to represent the player themselves. Ancillary_mercy_reviewed_the_final_novel_in_ann_leckie_s_imperial_radch.2. Meanwhile in the Future: Nobody Cares About Your Gender. Ursula K. Le Guin talks to Michael Cunningham about genres, gender, and broadening fiction. To celebrate this fantastic conversation between Hugo-and-Nebula award winner Ursula K. Le Guin and Pulitzer Prize winner Michael Cunningham about writing, freedom, and defying the limitations of genre, Diversion Books are offering Electric Literature readers the eBook of LeGuin’s genre-busting novel The Lathe of Heaven for just $3.99:

10 Female Directors Who Deserve More Attention From Holly. 10 Women Street Artists Who Are Better Than Banksy.