Art. Blackface. Clothes. Black America, please stop appropriating African clothing and tribal marks. — THOSE PEOPLE — Medium. For the life of me, I need to know: Can Black people culturally appropriate one other? 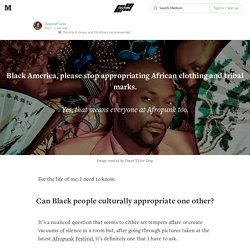 It’s a nuanced question that seems to either set tempers aflare or create vacuums of silence in a room but, after going through pictures taken at the latest Afropunk Festival, it’s definitely one that I have to ask. And if Blacks can, why is the disgust and uproar surrounding this ongoing phenomenon only reserved for instances when White people appropriate us? I ask this because Black Twitter is littered with countless examples of the uproar that ensues when White people appropriate Black culture.

Words such as fancy dress, mockery and profiteering are thrown around quite freely, but no one seems to realize that this selfsame violation is committed against us Africans — all under the guise of tribal fashion and connecting to The Motherland. [Focus] L’appropriation de la soul music par Claude François et d'autres. On a quelquefois tendance à l'oublier mais l'ensemble des musiques populaires mondiales actuelles prennent leurs sources dans la musique noire. 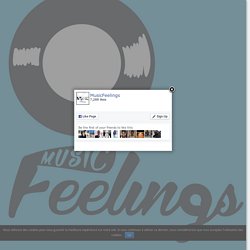 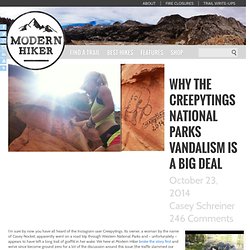 Its owner, a woman by the name of Casey Nocket, apparently went on a road trip through Western National Parks and – unfortunately – appears to have left a long trail of graffiti in her wake. We here at Modern Hiker broke the story first and we’ve since become ground zero for a lot of the discussion around this issue (the traffic slammed our otherwise excellent servers twice and will probably end up costing me some overage fees, but whatever). Early on, this was a rare example of the Collective Power of the Internet being used for Good. Both in our comments and on Reddit, users scanned the Instagram images we saved and were able to determine – in some cases down to the exact spots on the trail – the locations of most of the graffiti images. What's Wrong with Cultural Appropriation? These 9 Answers Reveal Its Harm. Japanese Designer Just Demonstrated How Not to Borrow From Another Culture.

Yet another racially tinged fashion controversy is brewing, this time over on the Paris runways, where one Japanese designer staged an African-themed fashion show ... with no models who appeared to be of African descent. 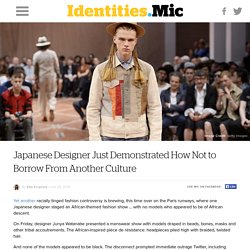 On Friday, designer Junya Watanabe presented a menswear show with models draped in beads, bones, masks and other tribal accoutrements. The African-inspired pièce de résistance: headpieces piled high with braided, twisted hair. And none of the models appeared to be black. Examining Representations of Indigenous Peoples. What Will White People Columbus Next? By now everyone has heard of Columbusing, the act of “discovering” something that has already existed forever, named after the explorer credited with finding the “New World.” 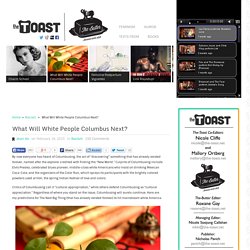 Culprits of Columbusing include Elvis Presley, celebrated blues pioneer; middle-class white Americans who insist on drinking Mexican Coca-Cola; and the organizers of the Color Run, which sprays its participants with the brightly colored powders used at Holi, the spring Indian festival of love and colors. Critics of Columbusing call it “cultural appropriation,” while others defend Columbusing as “cultural appreciation.”

Regardless of where you stand on the issue, Columbusing will surely continue. Here are my predictions for The Next Big Thing (that has already existed forever) to hit mainstream white America. New York Hipsters Are Obsessed With A Dessert Malaysians Have Been Eating All Their Lives. La Bella Vita~A Beautiful Life, A Handy Guide to What Is and Isn't Cultural Appropriation. Petites notes sur l’appropriation culturelle. Concept du coup de clavier ici. 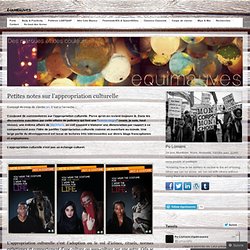 C’est à l’arrache. Feminist Intersection: On hipsters/hippies and Native culture. By Special Correspondent Jessica Yee, originally published at Bitch Magazine Lately I’ve had my fair share of run-ins with the hipsters and hippies, as well as the hippie/hipster “culture” at large, and have become increasingly annoyed at their depiction/co-option of my ethnicity as a First Nations person. 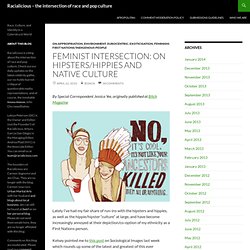 Kelsey pointed me to this post on Sociological Images last week which rounds up some of the latest and greatest of this ever continuing trend. Katy ‘the Queen of Cultural Appropriation’ Perry Is at It Again. Katy Perry, “This Is How We Do” YouTube Screenshot Editor’s note: This post includes language and tweets that some may find offensive. 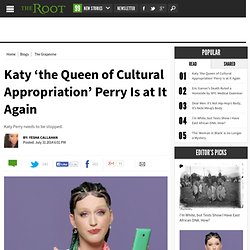 What has the world done so bad to deserve yet another shitastic Katy Perry video that displays her amazing ability to take appropriation to a whole different level? If you’re not familiar with Perry’s astute appropriation abilities, she’s already donned a full geisha costume, dressed as Cleopatra and performed with mummies that looked like big-booty chicks from a hip-hop video. Perry tried to explain the reasoning behind her images to Rolling Stone: “As far as the mummy thing, I based it on plastic surgery. Dear White Gays: Stop Stealing Black Female Culture. Cultural Appreciation or Cultural Appropriation? A text on culture, respect, allyship, and racism What is cultural appropriation? 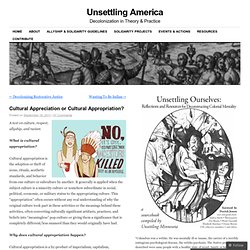 Cultural appropriation is the adoption or theft of icons, rituals, aesthetic standards, and behavior from one culture or subculture by another. It generally is applied when the subject culture is a minority culture or somehow subordinate in social, political, economic, or military status to the appropriating culture. CULTURE: TWERK: Booty-dancing, gender politics & white privilege. Booty-popping. 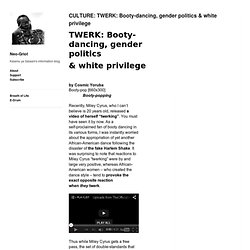 White Gay Man Publishes Epically Stupid Response To “Stop Stealing Black Female Culture” By yvonne & riese In a TIME article published last week, University of Mississippi student Sierra Mannie clearly articulates why it is wrong for white gay men to appropriate black female culture and why they are not allowed to “claim blackness or womanhood.” “At the end of the day, if you are a white male, gay or not, you retain so much privilege… The difference is that the black women with whom you think you align so well, whose language you use and stereotypical mannerisms you adopt, cannot hide their blackness and womanhood to protect themselves the way that you can hide your homosexuality.

We have no place to hide, or means to do it even if we desired them.” Because the patriarchy is so accustomed to silencing and shutting down black women’s voices, today TIME published a response to Mannie’s article written by a gay white cisgender man, Steve Friess, titled “Dear Black Women: White Gays Are Your Allies, So Don’t Push Us Away.” Oh you know he had a lot to say.

Why So Many American Indians Have an Issue With Coachella. The news: At this point, the Coachella Valley Music and Arts Festival has inevitably devolved into a parody of itself. Blinding sunshine, massive crowds, exorbitant ticket prices and rampant teenage drug abuse have bolstered its reputation as the yearly paean to rich kid debauchery you love to hate, and the one most people would inexplicably still commit murder to attend. But amidst all the bare skin and disappointed Outkast fans is another issue that bears discussing. What Is Cultural Appropriation and Why Is It Wrong? The United States has long been known as a melting pot and, more recently, as a salad bowl. Because people from hundreds of different ethnic backgrounds make up the nation’s population, it’s not surprising that at times cultural groups rub off on each other. Americans who grow up in diverse communities may pick up the dialect, customs and religious traditions of the cultural groups that surround them.

Appropriate Cultural Appropriation. For some of us, the attractions of another's culture can hardly be overrated. Within the context of speculative fiction's reputation as "escapist" literature, getting away from one's own traditions and background may seem like a good idea. Surely to find that much-prized "sensawunda" sought by genre afficionados, we must leave behind what British fantasist Lord Dunsany called "the fields we know? " Aliettedb: Cultural appropriation. [Warning: this is me in ranty, pissed-off mood. I apologise for picking targets and basically offloading my anger on them, but I honestly feel I can't make you understand what I mean without pointing at specific bits. Many thanks to Rochita Loenen-Ruiz for reading this before it went live] Defining and Identifying Cultural Appropriation. Here's what's going on and why I'm doing this now. First of all, I'm not gonna deal with global cultural appropriation, but rather focus on American appropriation of cultures brought into the US either by immigrants or by Americans who went abroad and brought stuff back.

Okay, here's a brief and incomplete definition of "cultural appropriation" I wrote in this post a couple of years ago (you have to read the whole post to really get where I'm coming from. . ): Cultural Appropriation: Halloween’s Post-Modern Problem. Yogaglo Patent Issued. On September 23rd, Yoga International broke the news that they (among others) had received a cease-and-desist letter from another website which also offers yoga videos for streaming (soon revealed to be YogaGlo). The Difference Between Cultural Exchange and Cultural Appropriation. Unintentionally Eating the Other.

Last Thursday, Crystal Renn, the model who recently appeared in a Vogue Japan spread with her eyes taped in ways that were suggestive of an old theater makeup trick meant to make white actors look “Asian,” offered an explanation and defense of the cosmetic practice. Tape, it should be noted, is only one of many tools in the arsenal of this particular form of racial drag, also known as yellowfacing – a practice that is literally older than America.