11 effets surprenants des jeux vidéos sur le cerveau. Crip Lit: Toward An Intersectional Crip Syllabus. Games have basic, huge accessibility problems (that we celebrate) People need to be able to play a game before they can begin to digest or critique it. 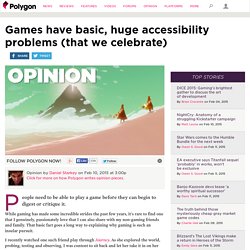 While gaming has made some incredible strides the past few years, it's rare to find one that I genuinely, passionately love that I can also share with my non-gaming friends and family. That basic fact goes a long way to explaining why gaming is such an insular pursuit. I recently watched one such friend play through Journey. Making Video Games For Everyone (Not Just the Able-Bodied) Gaming for Relief: Accessibility for a Veteran. One thing people don’t often get about me is that I am a disabled vet. 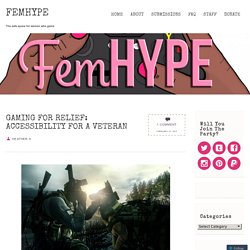 No, I was not injured helping a chicken cross the road—the other kind of vet, and not from Call of Duty either. Like the real Army and everything. I served my country for over 5 years doing an interesting job in a not-so-effective way. If you made a game about the real military, like the Army has done before, it would not be very exciting, what with trips to the motor pool and everything. When it was exciting, it would also be overwhelmingly crazy.

How does this relate to video games, you ask? Let’s Talk About Accessibility: What It’s Like to Game With a Disability. The other day I was playing a game from my backlog—Lego Batman 3: Beyond Gotham. 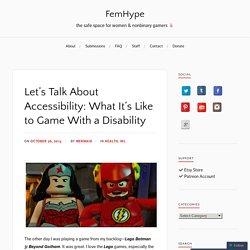 It was great. I love the Lego games, especially the writing in Lego Batman. Plus, I’m a completionist, so having a game with lots of collectables to find just makes me warm and fuzzy. How Pokémon Go is creating a barrier for gamers with disabilities. There is no viral phenomenon that's brought people together quite like Pokémon Go. 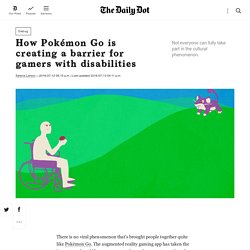 The augmented reality gaming app has taken the internet and world by storm, as people are desperate to catch and collect the characters, making friends and getting fit along the way. The game is appealing to virtually everyone, but it's simply not accessible for some players. Pokémon Go is limiting for people with physical disabilities, and the physical requirements needed to play the game—like moving around the environment to collect Pokémon, and walking a certain distance to hatch eggs—make it hard or impossible for some people to play. On Disability in Fiction. Ability, Disability and Dead Space. By Diane Carr. 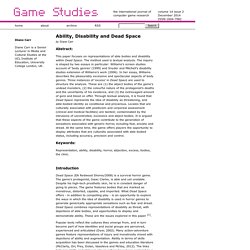 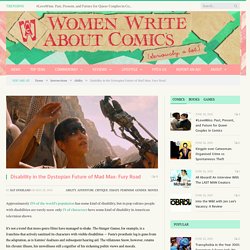 Revisiting Journey: A Game that Soothes the Chronically Anxious. It’s no secret that Journey is one of my all time favorite games, having extensively written about its brilliant use of silence and its characterization of landscapes. 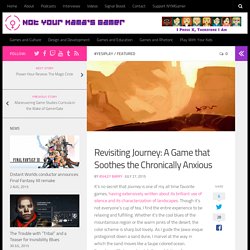 Though it’s not everyone’s cup of tea, I find the entire experience to be relaxing and fulfilling. Whether it’s the cool blues of the mountainous region or the warm pinks of the desert, the color scheme is sharp but lovely. As I guide the Jawa-esque protagonist down a sand dune, I marvel at the way in which the sand moves like a taupe colored ocean. Sometimes I’ll stop and watch the undulation of waves taking form in the blanket of sand. The Disability Community’s Bechdel Test. Since the emergence of the (newly renamed) Bechdel-Wallace Test, which is used to judge women’s representation in Hollywood films, other groups that feel marginalized in the media — sadly, everyone except white men — have searched for a similar short-hand as a means to communicate what they would like to see change. 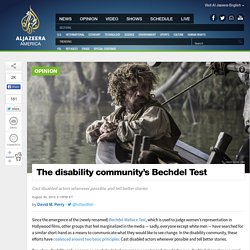 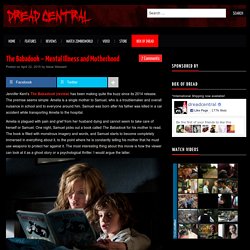 The premise seems simple: Amelia is a single mother to Samuel, who is a troublemaker and overall nuisance in school and to everyone around him. Your body isn't your world: The heroes of Mad Max and disability. I noticed a small detail on the opening moments of Avalanche Studio’s Mad Max: Max was wearing his leg brace. 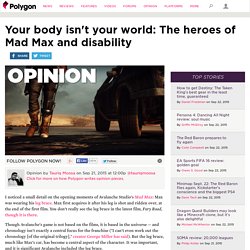 Max first acquires it after his leg is shot and ridden over, at the end of the first film. You don’t really see the leg brace in the latest film, Fury Road, though it is there. Though Avalanche’s game is not based on the films, it is based in the universe — and chronology isn’t exactly a central focus for the franchise ("I can’t even work out the chronology [of the original trilogy]," creator George Miller has said). But the leg brace, much like Max’s car, has become a central aspect of the character. The Monster in the Mirror: On Horror, Disability, and Loving Both at Once. One delirious summer night when I was nineteen, I went on a blind date with a man I met on Craigslist who was covered in beautiful tattoos from head to toe. About fifteen minutes after he picked me up from the barn where I worked, he began to get annoyed with my admittedly shallow and casual knowledge of the horror genre (he said in the ad that he wanted to meet ‘a Sherri Moon Zombie character,’ not a horror critic, but I digress).

Now, I might technically be a horror fan, he began to explain to me, but no, I was not a very good one, and he was starting to feel like I’d lied to him. It was then that I noticed he had a set of knuckle tattoos that originated during the Napoleonic Wars, and hoo boy. Disability in "Star Wars": Darth Vader, Luke Skywalker & Finn. Star Wars/Facebook Star Wars is, of course, highly covetable science fiction. We’ve got “tales of daring-do” (as Stan Lee would say), awesome anti-heroes, a young person on a hero’s journey, and one of the biggest villains of all time, Darth Vader.

But one constant that might escape the ableist point of view is that all of the Star Wars films involve a relationship between the main character(s) and disability. Specifically, one of the central themes of the the film series is how disability comes to define and/or change the character, either taking them further along their hero’s journey or down the path to the Dark Side. Disability And Gaming Resource List. Disabilities and games, whether it’s about characters with disabilities in games or people with disabilities playing games, is a subject I’ve been interested in for several years now.

Online written work is a bit difficult to find, so I thought I’d throw together a resource list to make it easier for people to find this sort of writing. I’ll check back every couple of weeks or so and update this periodically. –Javy Writing on Disability and Gaming. A Blind Legend, le jeu vidéo par le son. Finding Dory, Disability Culture, and Collective Access. On June 25th, I saw Finding Dory after reading many positive reviews and recommendations from my disabled friends. Beating Dyslexia. Hide captionVideo games with lots of action might be useful for helping people with dyslexia train the brain's attention system.

‘Animal Crossing’ & Gaming With Depression. I’ve been playing video games since I was five years old. Despite the fact that I didn’t have a true understanding of how to play Super Mario Bros. or Duck Hunt, I knew I was having fun. I’m Fine: On ‘Actual Sunlight,’ ‘Depression Quest,’ & Isolation – FemHype. [Trigger warning: Depression and suicidal thoughts.] Everyone has their own story to tell when it comes to depression. How Video Games Can Help With Depression. By Joe Donnelly. Coping With Anxiety and Depression Through Fiction. Everyone experiences anxiety and depression differently. Why I Game : the Anxious Gamers. Why action video games could be a treatment for dyslexia. How video games and augmented reality could cure phantom pain. For the most part, phantom limbs and the pain they can feel remain a medical mystery. Un nouveau jeu sur iPad pourrait améliorer la vie de patients schizophrènes - 04/08/2015.