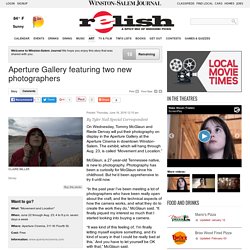 The exhibit, which will hang through Aug. 23, is called “Movement and Location.” McGlaun, a 27-year-old Tennessee native, is new to photography. Photography has been a curiosity for McGlaun since his childhood. An online service is needed to view this article in its entirety. Need an account? “In the past year I’ve been meeting a lot of photographers who have been really open about the craft, and the technical aspects of how the camera works, and what they do to create the work they do,” McGlaun said. “It was kind of this feeling of, ‘I’m finally letting myself explore something, and it’s kind of scary in that I could be really bad at this.’ “It started as something I kind of liked doing. Saving Kyrgyzstan With Skis. On the first day of backcountry guide training in Arslanbob, Kyrgyzstan, no one showed up with an avalanche beacon. 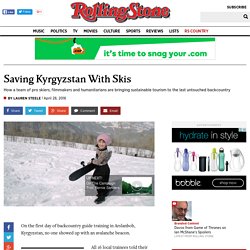 All 16 local trainees told their instructor, ski guide Donny Roth, that they had seen many avalanches in the craggy Babash-Ata Mountains that loom over their village, but were unafraid. After all, Allah was watching over them. But Roth knew the reality of the terrain they were standing on: a small slide could create a gulley of snow with grave consequences. "No matter if you are professionally guiding in the mountains or are just going out on the weekend recreationally, having a beacon is step one of being in the backcountry," he says. "But I wasn't going to yell at these guys or tell them why we weren't going out. 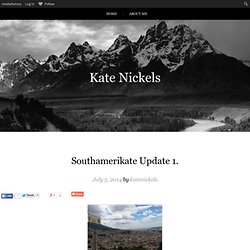 South America is not somewhere I imagined myself getting to before I was 20 but well, here I am. My trip began with a month in Quito, Ecuador making a documentary through the organisation Actuality Media. They work with local NGO´s in developing countries and along with some trained media proffessionals strive to create changemaking documentaries with students from around the world. The other places I could´ve travelled were Siem Reap, Cambodia or Kisumu, Kenya. I had visited Siem Reap before in 2011 and I didn´t feel quite ready for Kenya, plus I´d heard amazing things about South America from my friends. And so it was chosen. When i got there it was a shock.

It´s a country of suprises. I’ve been in Ecuador almost three weeks and here is my first update: Hey everybody, I want to apologize for the major delay in posting about Ecuador. 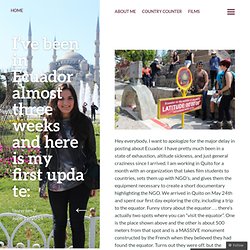 I have pretty much been in a state of exhaustion, altitude sickness, and just general craziness since I arrived. I am working in Quito for a month with an organization that takes film students to countries, sets them up with NGO’s, and gives them the equipment necessary to create a short documentary highlighting the NGO. We arrived in Quito on May 24th and spent our first day exploring the city, including a trip to the equator. Funny story about the equator…. there’s actually two spots where you can “visit the equator”. One is the place shown above and the other is about 500 meters from that spot and is a MASSIVE monument constructed by the French when they believed they had found the equator. I have been trying my best to explore the city as much as I can around our busy shooting schedule. On Sunday, a group of us filmmakers decided to hike up the volcano Pichincha.

Kibera Yetu (Documentary) Down the Rabbit Hole. Daniel Zawodny - Fine Arts Department. Documentary films can be and do so many things – they can inform, inspire, move people to tears, and speak out for the voiceless. 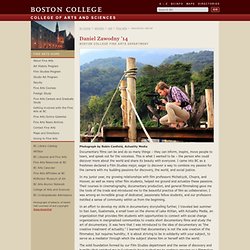 This is what I wanted to be – the person who could discover more about the world and share its beauty with everyone. I came into BC as a freshmen declared a Film Studies major, eager to discover a way to combine my passion for the camera with my budding passions for discovery, the world, and social justice. In my junior year, my growing relationships with film professors Michalcyzk, Chopra, and Hoover, as well as many other film students, helped me ground and actualize these passions.

Their courses in cinematography, documentary production, and general filmmaking gave me the tools of the trade and introduced me to the beautiful practice of film as collaboration. Natographs - Natography.