Health Systems in transition Turkey WHO report 2009. Turkish Statistical Institute Health Expenditure Statistics 2013. Health expenditure statistics were produced based on the methodology of System of Health Accounts developed by the Organization for Economic Co-operation and Development. 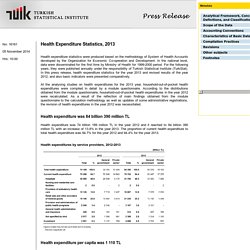 In the national level, data were disseminated for the first time by Ministry of Health for 1999-2000 period. For the following years, they were published annually under the responsibility of Turkish Statistical Institute (TurkStat). In this press release, health expenditure statistics for the year 2013 and revised results of the year 2012, and also basic indicators were presented comparatively. Health at a Glance Europe 2012. HEALTHCARE.INDUSTRY.pdf. Review-of-Health-Care-Quality-Turkey_ExecutiveSummary.pdf. Turkish Statistical Institute Income And Living Conditions Survey 2012. Income of the richest part of the population is 8 times of the poorest partConsidering the quintiles, the share of the highest income group - fifth quintile group – is 46.6%, whereas the share of the first quintile which has the lowest income is 5.9%. 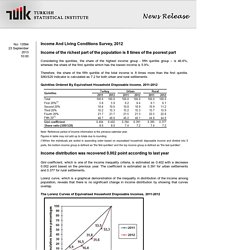 Therefore, the share of the fifth quintile of the total income is 8 times more than the first quintile. S80/S20 indicator is calculated as 7.2 for both urban and rural settlements. Quintiles Ordered By Equivalised Household Disposable Income, 2011-2012 Note: Reference period of income information is the previous calendar year.Figures in table may not add up to totals due to rounding. (*)When the individuals are sorted in ascending order based on equivalised household disposable income and divided into 5 parts, the bottom income group is defined as “the first quintiles” and the top income group is defined as “the last quintiles”.

Income distribution was recovered 0.002 point according to last year. 8.pdf. Ijph-41-48.pdf. Ccsbrief_tur_en.pdf. Healthcare market in Turkey to reach $29.62 billion in 2015, new analysis finds. Government funding, growth and consolidation of the middle class, and the rise in non-communicable diseases will enable Turkey to remain one of the sought-after countries for healthcare investment. 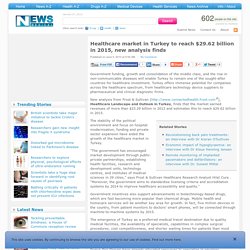 Turkey offers immense potential for companies across the healthcare spectrum, from healthcare technology device suppliers to pharmaceutical and clinical diagnostic firms. New analysis from Frost & Sullivan ( Healthcare Landscape and Outlook in Turkey, finds that the market earned revenues of more than $23.29 billion in 2012 and estimates this to reach $29.62 billion in 2015. The stability of the political environment and focus on hospital modernisation, funding and private sector expansion have aided the growth of the healthcare market in Turkey. Government incentives also support advancements in biotechnology-based drugs, which are fast becoming more popular than chemical drugs. Mobile health and homecare services will be another key area for growth.

Population âgée de 65 et plus (% du total) Prevalence of Diabetes in the World, 2013. Diabetes is a chronic metabolic disease that occurs when the human body is not able to produce enough of the hormone insulin or because cells do not respond to the insulin that is produced. 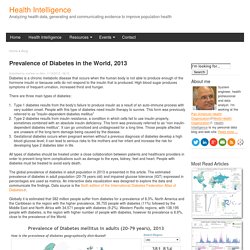 High blood sugar produces symptoms of frequent urination, increased thirst and hunger. There are three main types of diabetes: Type 1 diabetes results from the body's failure to produce insulin as a result of an auto-immune process with very sudden onset. People with this type of diabetes need insulin therapy to survive. This form was previously referred to as "insulin-dependent diabetes mellitus"Type 2 diabetes results from insulin resistance, a condition in which cells fail to use insulin properly, sometimes combined with an absolute insulin deficiency. All types of diabetes should be treated under a close collaboration between patients and healthcare providers in order to prevent long-term complications such as damage to the eyes, kidney, feet and heart.

References Related contents. The Medical Device Market: Turkey. BMI Industry View: The Turkish medical device market is expected to grow by a CAGR of 3.4 % over the 2013-2018 period, driven by import growth, the expansion of healthcare facilities and rising health expenditure. 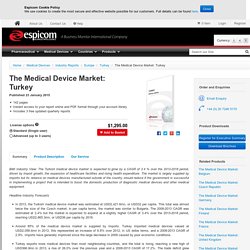 The market is largely supplied by imports but its reliance on medical devices manufactured outside of the country should reduce if the government is successful in implementing a project that is intended to boost the domestic production of diagnostic medical devices and other medical equipment. Headline Industry Forecasts In 2013, the Turkish medical device market was estimated at USD2,421.6mn, or USD32 per capita. Briefing-Note-TURKEY-2014.pdf. Turkey's health care spend jumps 13.8% in 2013 Anadolu Agency. By Bahattin Gonultas. 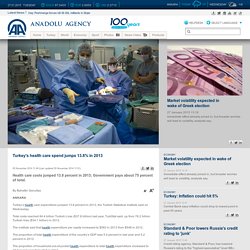 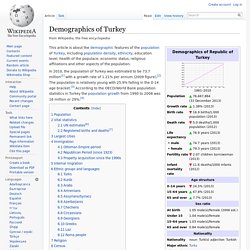 In 2010, the population of Turkey was estimated to be 73.7 million[1] with a growth rate of 1.21% per annum (2009 figure).[2] The population is relatively young with 25.9% falling in the 0-14 age bracket.[3] According to the OECD/World Bank population statistics in Turkey the population growth from 1990 to 2008 was 16 million or 29%.[4] Population[edit] Vital statistics[edit] UN estimates[6][edit] Registered births and deaths[7][edit] Birth statistics of Turkey have been started to get from The Central Population Administrative System (MERNIS) data base after MERNIS had on-line application in 2001. Largest cities[edit] Proportional circle map with town population in 2012. Immigration[edit] Ottoman Empire period[edit] Page. Investing in Turkey's Medical Technologies Market. With a population close to 80 million people and healthcare spending per capita that has grown in the last decade from $330 to $780, Turkey has an expanding middle class willing to spend more on healthcare technology and service. 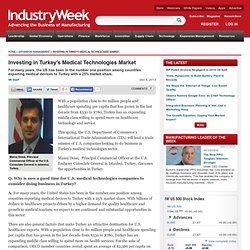 This spring, the U.S. Department of Commerce's International Trade Administration (ITA) will lead a trade mission of U.S. companies looking to do business in Turkey's medical technologies sector. Manoj Desai, Principal Commercial Officer at the U.S. Embassy Consulate General in Istanbul, Turkey, discusses the opportunities in Turkey. Q: Why is now a good time for U.S. medical technologies companies to consider doing business in Turkey? A: For many years, the United States has been in the number one position among countries exporting medical devices to Turkey with a 25% market share.