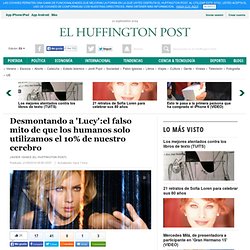 Bonito, pero falso. When cycling, wear a helmet…or maybe don’t. If you have a bike, most surely you will own a helmet too. 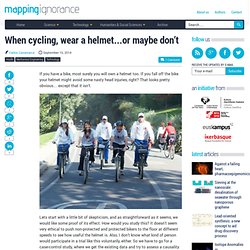 If you fall off the bike your helmet might avoid some nasty head injuries, right? That looks pretty obvious… except that it isn’t. Lets start with a little bit of skepticism, and as straightforward as it seems, we would like some proof of its effect. IQ in decline across the world as scientists say we’re getting dumber. 'Chemistry Life Hacks' Will Let You Chill Beer Faster Than You Ever Dreamed Possible. How Languages Evolve: Explained in a Winning TED-Ed Animation. Language. 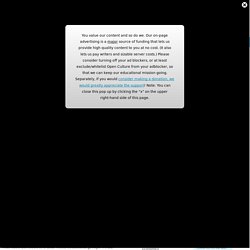 It’s as adaptable as Darwin’s finches. It’d be interesting to know how the Internet changes the game. Seems like it would go a long way toward democratizing the process by which lingo gets mingled. Alex Gendler’s TED-Ed lesson, winningly animated by Igor Coric, rolls back the clock to a time when communal groups would subdivide and strike out on their own, usually in order to beef up the food supply. Cocaine Rewires the Brain. New study to unlock keys that could disrupt addiction. 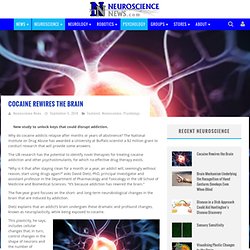 Why do cocaine addicts relapse after months or years of abstinence? The National Institute on Drug Abuse has awarded a University at Buffalo scientist a $2 million grant to conduct research that will provide some answers. The UB research has the potential to identify novel therapies for treating cocaine addiction and other psychostimulants, for which no effective drug therapy exists. “Why is it that after staying clean for a month or a year, an addict will, seemingly without reason, start using drugs again?” Asks David Dietz, PhD, principal investigator and assistant professor in the Department of Pharmacology and Toxicology in the UB School of Medicine and Biomedical Sciences. Cadavers and Curios from the Dawn of Modern Medicine [Slide Show] Email Dr. 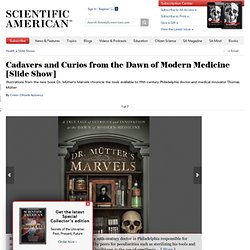 Mütter’s Marvels Thomas Dent Mütter was a 19th-century doctor in Philadelphia responsible for numerous medical innovations. He was mocked by peers for peculiarities such as sterilizing his tools and offering pre- and post-operative care, and was a trailblazer in the use of anesthesia.....[ More ] New super waterproof surfaces cause water to bounce like a ball. (Phys.org) —In a basement lab on BYU's campus, mechanical engineering professor Julie Crockett analyzes water as it bounces like a ball and rolls down a ramp. 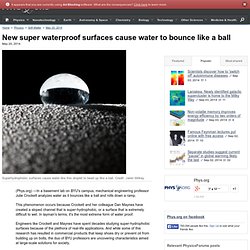 This phenomenon occurs because Crockett and her colleague Dan Maynes have created a sloped channel that is super-hydrophobic, or a surface that is extremely difficult to wet. In layman's terms, it's the most extreme form of water proof. Engineers like Crockett and Maynes have spent decades studying super-hydrophobic surfaces because of the plethora of real-life applications. And while some of this research has resulted in commercial products that keep shoes dry or prevent oil from building up on bolts, the duo of BYU professors are uncovering characteristics aimed at large-scale solutions for society. 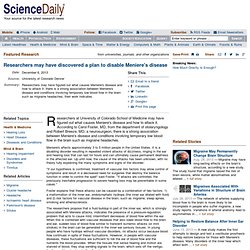 According to Carol Foster, MD, from the department of otolaryngology and Robert Breeze, MD, a neurosurgeon, there is a strong association between Meniere's disease and conditions involving temporary low blood flow in the brain such as migraine headaches. Meniere's affects approximately 3 to 5 million people in the United States. It is a disabling disorder resulting in repeated violent attacks of dizziness, ringing in the ear and hearing loss that can last for hours and can ultimately cause permanent deafness in the affected ear. 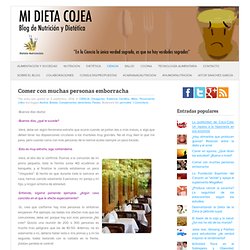 ¿Cómo consiguieron las cebras sus rayas? Gracias a Alan Turing. Optogenética, la fascinante técnica que apasiona a los neurocientíficos. Biblioteca de divulgación científica gratis para descargar. What Actually Happens When You Get A Sunburn. It's been a long, hot summer, and for many of us, our skin is certainly feeling the effects. 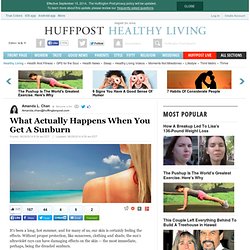 Without proper protection, like sunscreen, clothing and shade, the sun's ultraviolet rays can have damaging effects on the skin -- the most immediate, perhaps, being the dreaded sunburn. At the root of it, a sunburn is damage -- and ultimately, death -- to some of the cells of the epidermis layer of the skin. In technical terms, "ultraviolet damage causes free radical production and oxidative stress, which causes DNA damage," dermatologist Neal Schultz, M.D., host of DermTV, explains to HuffPost. 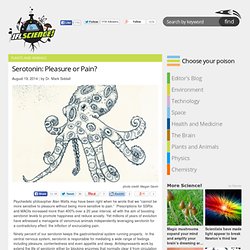 Prescriptions for SSRIs and MAOIs increased more than 400% over a 20 year interval, all with the aim of boosting serotonin levels to promote happiness and reduce anxiety. Yet millions of years of evolution have witnessed a menagerie of venomous animals independently leveraging serotonin for a contradictory effect: the infliction of excruciating pain. Ninety percent of our serotonin keeps the gastrointestinal system running properly. 6 interesantes curiosidades sobre la sangre que debes conocer - Ojo Curioso. Photographer Captures Scientists' Frightened Responses To Climate Change Discussions.

We've read the daunting headlines. We've seen the bleak predictions. We know in our minds that climate change is putting our Earth's future in danger. And yet there's something uniquely frightening about this artist's attempt to transform global warming data into visceral, human responses. In his black-and-white photography series "Scared Scientists," Nick Bowers captures a raw element not often associated with scientific knowledge. For the series, Bowers interviewed a selection of scientists in varying fields, capturing the frightened looks on their faces while they contemplated their findings. Bowers told The Huffington Post he hopes to convey "the humanity and vulnerability of the scientists" through his work.

La ciencia moderna y la Ilustración. “La Ilustración fue un vuelo de Ícaro de la mente que se extendió por los siglos XVII y XVIII. The Year in Heat: World on Track for Third-Hottest on Record. If you live in California, Australia or Scandinavia, 2014 may feel like the hottest year on record. Not quite; on a global scale, it’s “only” third-hottest. The global average surface temperature for January through July was 1.2 degrees Fahrenheit (0.66 degrees Celsius) above the 20th century average, tying with 2002 as the third warmest in records going back to 1880, according to National Climatic Data Center data released today. Hottest Years on Record The greatest share of global warming in recent years has been absorbed by the oceans. The beginnings of an El Nino warming pattern in the Pacific Ocean earlier this year threatened to stir up some of the heat. Thirteen of the 14 hottest years on record have all occurred in the 21st century.

Fireflies Inspire Brighter LEDs. An international team of researchers led by Annick Bay at the University of Namur in Belgium examined the light-emitting organ of Photuris fireflies under a scanning electron microscope and identified seven structures that showed promise for boosting LED output. Using computer simulations, the scientists determined that the most influential aspect was misfit scales on the organ’s surface that give it a rough, shingle-like quality. The multiple abrupt edges scatter light rays to increase the amount of light that escapes the glowing organ. Led by Bay, a second team then etched a similar shingle-like surface and added it to existing LED bulbs, boosting their light output by 55 percent.

A PhD student studying microbiology in Nigeria, he did not have the expertise and equipment he needed. So he turned to ResearchGate, a free social-networking site for academics, and fired off a few e-mails. When he got a reply from Italian geneticist Orazio Romeo, an inter­national collaboration was born. Over the past three years, the two scientists have worked together on fungal infections in Africa, with Nnadi, now at Plateau State University in Bokkos, shipping his samples to Romeo at the University of Messina for analysis. The internet: Too much of a good thing. The End of Absence: Reclaiming What We’ve Lost in a World of Constant Connection.