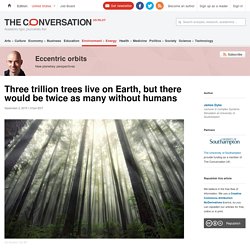 This is one of the startling conclusions of new research published in the journal Nature. The study also estimates the Earth is home to more than three trillion trees – that’s 3,000 billion – so you may think that while 15 billion is a very large number, humans shouldn’t be at risk of making significant changes to global tree cover. However, the team of 31 international scientists led by Thomas Crowther at Yale University also present evidence that the rise of human civilisation has reduced the numbers of trees on Earth by 46%. La humanidad ya ha destruido la mitad de todos los árboles del planeta. Es el tipo de pregunta que deja sin guardia a cualquier padre y que ni las mejores mentes han podido responder de forma satisfactoria: ¿Cuántos árboles hay en el mundo? 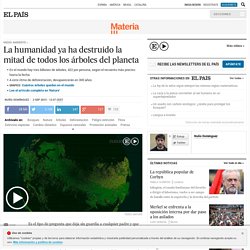 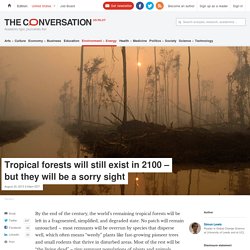 No patch will remain untouched – most remnants will be overrun by species that disperse well, which often means “weedy” plants like fast-growing pioneer trees and small rodents that thrive in disturbed areas. Most of the rest will be “the living dead” – tiny remnant populations of plants and animals hanging on with no future. 150820212652. The fact that the greatest diversity of large mammals is found in Africa reflects past human activities -- and not climatic or other environmental constraints. 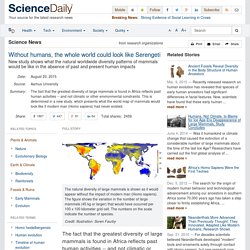 This is determined in a new study, which presents what the world map of mammals would look like if modern man (Homo sapiens) had never existed. In a world without humans, most of northern Europe would probably now be home to not only wolves, Eurasian elk (moose) and bears, but also animals such as elephants and rhinoceroses. This is demonstrated in a new study conducted by researchers from Aarhus University, Denmark.

In a previous analysis, they have shown that the mass extinction of large mammals during the Last Ice Age and in subsequent millennia (the late-Quaternary megafauna extinction) is largely explainable from the expansion of modern man (Homo sapiens) across the world. Rewilding: Movement to restore wilderness areas is growing across Europe - Travel - The Independent. A safari at the Knepp Wildland Project in West Sussex is very much in this vein. 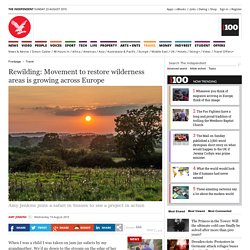 Knepp Castle and its 3,500 acre estate is home to Charles and Issy Burrell and has been in the family for 220 years. Until 15 years ago the couple farmed the land, but the soil was heavy clay and they struggled to make ends meet. Feds allow Shell to drill for oil in Arctic Ocean off Alaska. The federal government on Monday gave Royal Dutch Shell the final permit it needs to drill for oil in the Arctic Ocean off Alaska's northwest coast for the first time in more than two decades. 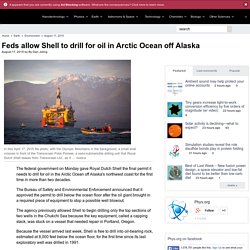 The Bureau of Safety and Environmental Enforcement announced that it approved the permit to drill below the ocean floor after the oil giant brought in a required piece of equipment to stop a possible well blowout. The agency previously allowed Shell to begin drilling only the top sections of two wells in the Chukchi Sea because the key equipment, called a capping stack, was stuck on a vessel that needed repair in Portland, Oregon. Because the vessel arrived last week, Shell is free to drill into oil-bearing rock, estimated at 8,000 feet below the ocean floor, for the first time since its last exploratory well was drilled in 1991.

The Polar Pioneer, a semi-submersible drilling unit that Shell leases from Transocean Ltd., began work July 30 at Shell's Burger J site. New research reveals climate change threat to uplands. Print page Last modified: 31 July 2015 Several rare upland bird species are being put at risk together with other ecosystem functions by the effects of climate change on the UK’s blanket bogs, ecologists at the University of York have discovered. 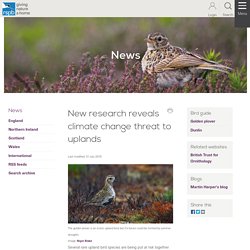 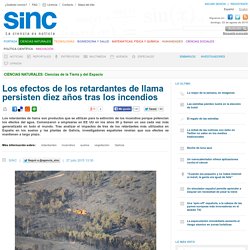 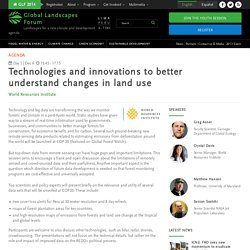 Static studies have given way to a stream of real-time information used by governments, businesses, and communities to better manage forests for conservation, for economic benefit, and for carbon. Several such ground-breaking new remote-sensing data products related to estimating emissions from deforestation around the world will be launched at COP 20 (featured on Global Forest Watch). Oilsands companies not responsible for bird deaths. WWT - Wetlands for life - What's on. North West Bird Watching Festival Whatever the weather, The North West Bird Watching Festival is an enjoyable and informative day out. 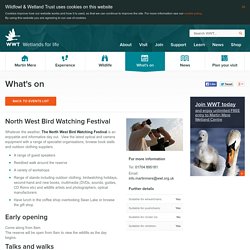 Meet 7 new endangered species on the IUCN Red List. Earth's preeminent list of endangered species marks its 50th anniversary this year, but there isn't much time to celebrate. Why natural conservation methods matter for the future of urban water supplies. The liquid that comes cascading out of the faucet each time you step up to the sink to brush your teeth, wash your hands or refill your self-cleaning, basil-growing aquarium has to come from somewhere, you know. And unless the municipal water supply in your city or town has been compromised or you are hyper-aware of personal water usage due to drought, there’s a good chance you might not know where that somewhere is.

In addition to the report itself, Urban Water Blueprint includes a fascinating interactive website that details the state of 2,000 water-supplying ecosystems and the 530 cities across the globe, home to more than 1 billion people, that draw from them. Conservation deal saves world's largest bat colony. With white-nose syndrome sweeping some parts of the country and killing millions of bats, there's rarely any good news to share about these cave-dwelling mammals. But the bats of Bracken Bat Cave have reason to celebrate, thanks to a $20 million deal signed on Halloween to protect these animals from a housing development that would have threatened the world's largest bat colony.

Located outside of San Antonio, the cave is home to the largest colony of Mexican free-tailed bats in the world with 15 million to 20 million bats. Twitter. Albania’s Coastal Wetlands: Killing Field for Migrating Birds by Phil McKenna: Yale Environment 360. 23 Oct 2014: Report by phil mckenna Each spring, hundreds of thousands of migrating waterbirds flock northward from Africa across the Mediterranean and Adriatic Seas. In search of food, they alight briefly on Albania’s Buna Delta — one of the largest remaining wetlands in all of the Balkan Peninsula. The delta is also one of the most notorious killing grounds for migrating birds in all of Europe.

The monarch butterfly hits the peak of its winter migration in October, and as it makes its way from Canada and the U.S. to Mexico, all three countries will be watching its numbers closely. In February, President Enrique Peña Nieto of Mexico, flanked by President Barack Obama and Prime Minister Stephen Harper of Canada, announced that they would set up a task force charged with saving the continent's monarchs.

Then in late May, the three countries devoted several sessions to the butterfly at an annual wildlife conservation summit. That is because the monarch is declining precipitously. In the past decade the population east of the Rocky Mountains dropped from an estimated one billion to the 33 million that survived their journey last winter; the western population, which winters in California, has also dwindled in recent years. “Extinct” Snail Found Alive—But for How Long? El cambio climático podría reducir la distribución de los seres vivos tres veces más de lo previsto.