Global warming may increase odds of unprecedented 'grey swan' hurricanes. Black swans are catastrophic events that no one sees coming, while “grey swans,” as the are known, are extreme events for which there’s no historical precedent, but that could still potentially be predicted. 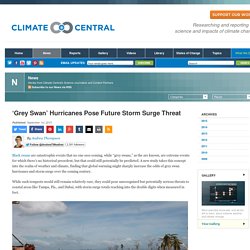 A new study takes this concept into the realm of weather and climate, finding that global warming might sharply increase the odds of grey swan hurricanes and storm surge over the coming century. While such tempests would still remain relatively rare, they could pose unrecognized but potentially serious threats to coastal areas like Tampa, Fla., and Dubai, with storm surge totals reaching into the double digits when measured in feet. Damage wrought by Typhoon Haiyan's storm surge, which reached between 15 and 20 feet, in the Philippines in November 2013.Click image to enlarge. Credit: UNICEF, Jeoffrey Maitem 10,000-Year Storms. 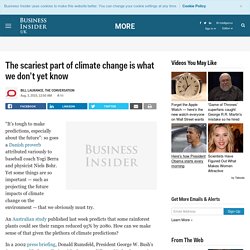 Yet some things are so important — such as projecting the future impacts of climate change on the environment — that we obviously must try. An Australian study published last week predicts that some rainforest plants could see their ranges reduced 95% by 2080. 'Mini ice age' coming in next fifteen years, new model of the Sun's cycle shows - Climate Change - Environment. We are now able to predict solar cycles with far greater accuracy than ever before thanks to a new model which shows irregularities in the sun’s 11-year heartbeat. 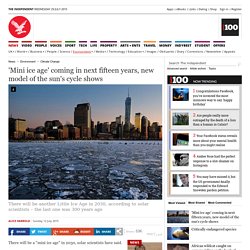 The model shows that solar activity will fall by 60 per cent between 2030 and 2040 causing a "mini ice age". The conditions predicted have not been experienced since the last "mini ice age" which lasted from 1645 to 1715, called the Maunder Minimum. A complex landscape has both vulnerabilities and resilience to climate change. Central Appalachian forests have been experiencing the effects of a changing climate for decades, and effects such as more heavy rainfall events, more drought, and more hot days are likely to continue, according to a new vulnerability assessment for the region by the U.S. 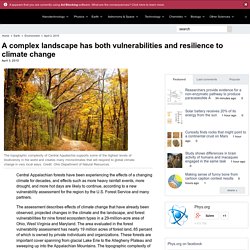 Forest Service and many partners. The assessment describes effects of climate change that have already been observed, projected changes in the climate and the landscape, and forest vulnerabilities for nine forest ecosystem types in a 29-million-acre area of Ohio, West Virginia and Maryland. Warming of oceans due to climate change is unstoppable, say US scientists. The warming of the oceans due to climate change is now unstoppable after record temperatures last year, bringing additional sea-level rise, and raising the risks of severe storms, US government climate scientists said on Thursday. 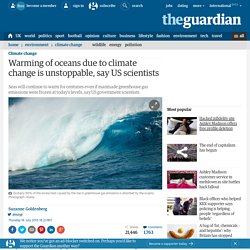 The annual State of the Climate in 2014 report, based on research from 413 scientists from 58 countries, found record warming on the surface and upper levels of the oceans, especially in the North Pacific, in line with earlier findings of 2014 as the hottest year on record. Global sea-level also reached a record high, with the expansion of those warming waters, keeping pace with the 3.2 ± 0.4 mm per year trend in sea level growth over the past two decades, the report said. A complex landscape has both vulnerabilities and resilience to climate change.

Central Appalachian forests have been experiencing the effects of a changing climate for decades, and effects such as more heavy rainfall events, more drought, and more hot days are likely to continue, according to a new vulnerability assessment for the region by the U.S. 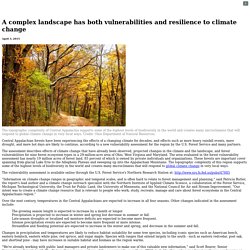 Forest Service and many partners. The assessment describes effects of climate change that have already been observed, projected changes in the climate and the landscape, and forest vulnerabilities for nine forest ecosystem types in a 29-million-acre area of Ohio, West Virginia and Maryland. Exploring the human side of climate change adaptation. In public policy, communities often measure their ability to respond to the effects of climate change and natural disasters in terms of traditional emergency resources—the number of sandbags available, or access to ambulances and hospitals. 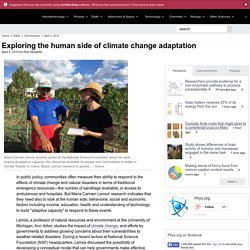 But Maria Carmen Lemos' research indicates that they need also to look at the human side: behavioral, social and economic factors including income, education, health and understanding of technology to build "adaptive capacity" to respond to these events. Lemos, a professor of natural resources and environment at the University of Michigan, Ann Arbor, studies the impact of climate change, and efforts by governments to address growing concerns about their vulnerabilities to weather-related disasters. "This involves thinking about basic relationships between different kinds of capacities, to understand how those things build off each other, or trade off on each other," she said in an interview. Theconversation. The Earth is on course to lose up to one in six of all its species, if carbon emissions continue as they currently are. 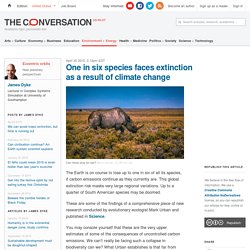 This global extinction risk masks very large regional variations. Up to a quarter of South American species may be doomed. These are some of the findings of a comprehensive piece of new research conducted by evolutionary ecologist Mark Urban and published in Science. The reality of climate change in peoples' lives. Climate change is no longer a vague, abstract ‘concept’. 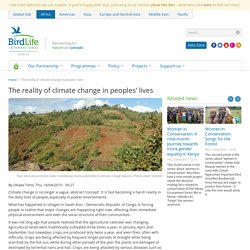 It is fast becoming a harsh reality in the daily lives of people, especially in poorer environments. What has happened in villages in South Kivu - Democratic Republic of Congo, is forcing people to realise that major changes are happening right now; affecting their immediate physical environment and even the social structure of their communities. Global warming: Scientists say temperatures could rise by 6C by 2100 and call for action ahead of UN meeting in Paris - Climate Change - Environment - The Independent. A Birder’s Guide To The Future #birding #nature #climatechange #science. Important study of how climate affects biodiversity. How does climate change affect the occurrence and distribution of species? 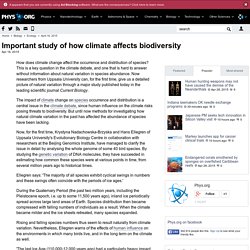 This is a key question in the climate debate, and one that is hard to answer without information about natural variation in species abundance. Now researchers from Uppsala University can, for the first time, give us a detailed picture of natural variation through a major study published today in the leading scientific journal Current Biology. Leading group of climate change deniers accused of creating 'fake controversy' over claims global temperature data may be inaccurate - Science - News - The Independent. The Global Warming Policy Foundation (GWPF), established by notable climate-change sceptic Lord Lawson, announced an international team of “eminent climatologists, physicists and statisticians” would investigate the reliability of the current data.

Professor Terence Kealey, the former vice-chancellor of the University of Buckingham, has been appointed chair of the international temperature data review project. Professor Kealey studied medicine at Oxford University before lecturing on clinical biochemistry, which is primarily concerned with the analysis of bodily fluids, at Cambridge University. It is unclear what experience he has in the field of climate change. The other five commissioners of the data review project: Petr Chylek, Richard McNider, Roman Mureika, Roger A Pielke Sr and William van Winjngaarden are all associated with North American universities.

Loading gallery. Global warming more moderate than worst-case models, empirical data suggest. A new study based on 1,000 years of temperature records suggests global warming is not progressing as fast as it would under the most severe emissions scenarios outlined by the Intergovernmental Panel on Climate Change (IPCC). "Based on our analysis, a middle-of-the-road warming scenario is more likely, at least for now," said Patrick T. Brown, a doctoral student in climatology at Duke University's Nicholas School of the Environment. "But this could change. " The Duke-led study shows that natural variability in surface temperatures -- caused by interactions between the ocean and atmosphere, and other natural factors -- can account for observed changes in the recent rates of warming from decade to decade.

The researchers say these "climate wiggles" can slow or speed the rate of warming from decade to decade, and accentuate or offset the effects of increases in greenhouse gas concentrations. Have We Passed the Point of No Return on Climate Change? Dear EarthTalk: What is the best way to measure how close we are to the dreaded "point of no return" with climate change?

In other words, when do we think we will have gone too far? — David Johnston, via EarthTalk.org While we may not yet have reached the “point of no return”—when no amount of cutbacks on greenhouse gas emissions will save us from potentially catastrophic global warming—climate scientists warn we may be getting awfully close.

Study Forecasts 70% Loss of West Canada’s Glaciers. You can hear the coral reefs dying, experts say. You can hear the sound of former bustling coral reefs dying due to the impact of human activity, according to new research from the Universities of Essex and Exeter. Coral reefs are amongst the noisiest environments on our planet and healthy reefs can be heard using underwater microphones from kilometres away. However, scientists have found that coral reefs impacted by human activity, such as overfishing, are much quieter than protected reefs, which can have a big impact on the fish and invertebrates which rely on the reefs for survival.

Alexander Verbeek sur Twitter : "Will #climate change make your city uninhabitable? #cities... What do Miami, Phoenix and Las Vegas have in common? Climate change may make them uninhabitable. WWF sur Twitter : "The #IPCC Synthesis Report on #climatechange should be a must read for all world leaders! Twitter. No more debates on climate science, over to leaders. Assaad Razzouk sur Twitter : "Five Reasons #Solar Will Power the Future #cities #climate... Five Reasons Solar Will Power the Future. Just a short time ago, solar power was a groovy little niche industry in the broad field of energy generation. The Arctic and the Antarctic Respond in Opposite Ways. Alexander Verbeek sur Twitter : "Bad news: September was the hottest month ever recorded #climate... NASA Reports Hottest Recorded September. 12.10.2014 16:54 Age: 33 min Click to enlarge.Global surface temperature analysis for September 2014.