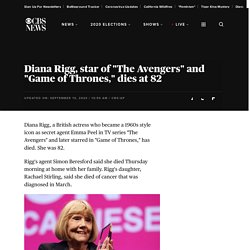 She was 82. Rigg's agent Simon Beresford said she died Thursday morning at home with her family. Rigg's daughter, Rachael Stirling, said she died of cancer that was diagnosed in March. Rigg "spent her last months joyfully reflecting on her extraordinary life, full of love, laughter and a deep pride in her profession. I will miss her beyond words," Stirling said. Rigg starred in "The Avengers" alongside Patrick McNee's bowler-hatted John Steed. Her performance as the cat-suited Emma Peel brought her international fame, BBC News reported. "Sexy, resourceful and self-assured - with a deadly knowledge of self-defence - Rigg's character became an icon for the growing feminist movement," the BBC wrote. Diana Rigg dies. In Encounters With Black Leaders, Trump Has Chosen Photo Ops Over Substance. On Martin Luther King’s Birthday in January 2017, Donald J. 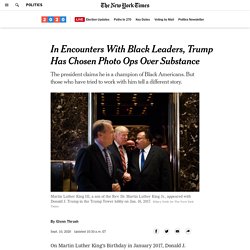 Trump, then the president-elect, welcomed a group of civil rights leaders, led by Dr. King’s eldest son, into his office in Trump Tower. After a tour of Mr. Trump’s celebrity curio collection (Shaquille O’Neal’s sneakers, size 22, were a highlight), the visitors presented him with a proposal intended to prevent state voter identification laws from disenfranchising people of color. The delegation had low expectations. “Many people didn’t go out — many Blacks didn’t go out — to vote for Hillary because they liked me. Mr. “I will be better to the African-American people than anybody else in this room,” he declared just before heading down the elevator to appear before the cameras with his guests, according to the recording, which was shared with several news organizations last month.

To Mr. As the 2020 campaign hits the homestretch, Mr. In fact, Mr. When asked about Mr. And as the 2017 meeting illustrates, many of Mr. Mr. Trump hard to work with (new york times) Poll: Coronavirus fatigue may be setting in as more see pandemic as economic crisis. WASHINGTON — New data from the NBC|SurveyMonkey Weekly Tracking Poll show signs that coronavirus fatigue is setting in for the nation. 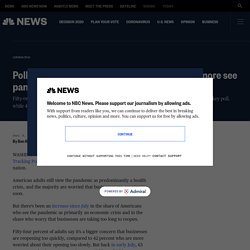 American adults still view the pandemic as predominantly a health crisis, and the majority are worried that businesses are opening too soon. But there's been an increase since July in the share of Americans who see the pandemic as primarily an economic crisis and in the share who worry that businesses are taking too long to reopen. Fifty-four percent of adults say it's a bigger concern that businesses are reopening too quickly, compared to 42 percent who are more worried about their opening too slowly. But back in early July, 63 percent saw businesses' reopening too quickly as the bigger concern, compared to 33 percent who were more worried about slower reopenings. Coronavirus. Obama makes video with Harris to share thoughts about Biden. 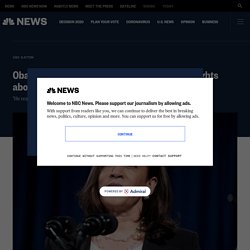 The video, provided first to NBC News, features the former president talking with Harris about his relationship with Joe Biden. It’s the first time Obama has appeared — virtually — alongside Harris since she was tapped as Biden’s vice presidential pick. Let our news meet your inbox. The news and stories that matters, delivered weekday mornings. 2020 election. Abcnews.go. As medical researchers sprint to develop a vaccine for the novel , there is a new race underway -- for a spot at the front of the line to be inoculated amid what will likely be a gradual rollout of doses. 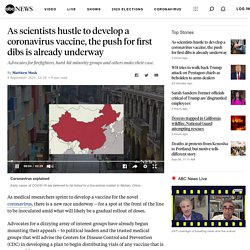 Advocates for a dizzying array of interest groups have already begun mounting their appeals – to political leaders and the trusted medical groups that will advise the Centers for Disease Control and Prevention (CDC) in developing a plan to begin distributing vials of any vaccine that is approved for use. Evidence of the intense interest was on full display last week, as dozens of advocates appeared in an open online hearing hosted by the National Academies of Science, Engineering and Medicine – a listening session that lasted 5 hours. Several Democratic lawmakers told ABC News they are intent on policing the process to make sure it is divorced from the influence of politics or lobbying – something they fear could infect the vaccine approval process. Corona vaccine. Some area school districts began in-person learning today.

SAN ANTONIO – A handful of students and teachers are back in the classroom as some area school districts have started in-person learning, with the majority having done remote learning since mid-August. 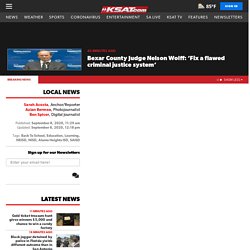 Second grader Deztiny Bullock is excited about being back at her school Margil Elementary. “I get to see my teacher,” she said. She’s heading back, because her mom works at the school. Deztiny says she does better in the classroom than virtual learning. “Because I get to sit in my desk,” Deztiny said. She is one of ten percent of students at the school -- SAISD is only allowing that amount on their campuses -- and they are prioritizing Pre-K through second grade, working parents and special education students. Other area districts returning in person include Northside, North East and Alamo Heights ISDs. North East ISD is allowing up to five students that will be allowed in each class during the first phase. Some kids going back to school.