State Policies on Sex Education in Schools. All states are somehow involved in sex education for public schoolchildren. 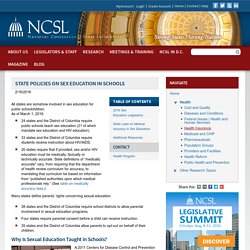 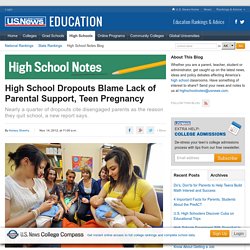 A lack of parental support and the challenges of teen pregnancy are among the primary factors driving students to leave high school before earning their diploma, according to a new report released today. Twenty-three percent of high school dropouts surveyed cited lack of support and encouragement from their parents as the reason they quit school, the report by Harris Interactive, a research firm, and Everest College revealed. [Discover why teens learn better with engaged parents.] Another 21 percent said they dropped out after having a child of their own, according to the survey, which included responses from 513 American adults, ages 19 to 35, who have not completed high school. The responses were weighted by age, gender, and location in order for the results to be nationally representative. Why Do More Latina Teens Get Pregnant? I'm Celeste Headlee and this is TELL ME MORE from NPR News. 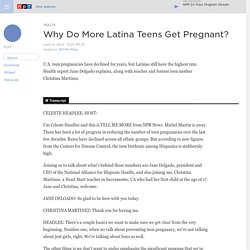 Michel Martin is away. There has been a lot of progress in reducing the number of teen pregnancies over the last few decades. Rates have declined across all ethnic groups. But according to new figures from the Centers for Disease Control, the teen birthrate among Hispanics is stubbornly high. Joining us to talk about what's behind these numbers are Jane Delgado, president and CEO of the National Alliance for Hispanic Health, and also joining me, Christina Martinez, a Head Start teacher in Sacramento, CA who had her first child at the age of 17.

JANE DELGADO: So glad to be here with you today. CHRISTINA MARTINEZ: Thank you for having me. HEADLEE: There's a couple basics we want to make sure we get clear from the very beginning. The other thing is we don't want to under emphasize the significant progress that we've made in cutting down on teen pregnancies among all groups. HEADLEE: Biologically. DELGADO: Biologically. DELGADO: Yes. Teen Pregnancy Home - Reproductive Health. Does the Bible prohibit abortion? Abortion in the Bible and Church history. There is a small but influential circle of prochoice advocates who claim to base their beliefs on the Bible. 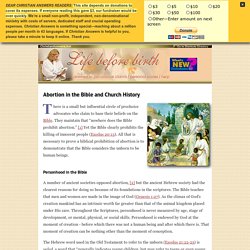 They maintain that “nowhere does the Bible prohibit abortion.” [1] Yet the Bible clearly prohibits the killing of innocent people (Exodus 20:13). All that is necessary to prove a biblical prohibition of abortion is to demonstrate that the Bible considers the unborn to be human beings. Personhood in the Bible A number of ancient societies opposed abortion, [2] but the ancient Hebrew society had the clearest reasons for doing so because of its foundations in the scriptures.

The Bible teaches that men and women are made in the image of God (Genesis 1:27). The Hebrew word used in the Old Testament to refer to the unborn (Exodus 21:22-25) is yeled, a word that “generally indicates young children, but may refer to teens or even young adults.” [3] The Hebrews did not have or need a separate word for unborn children. About Teen Pregnancy. Teen Pregnancy in the United States In 2014, a total of 249,078 babies were born to women aged 15–19 years, for a birth rate of 24.2 per 1,000 women in this age group.1 This is another historic low for U.S. teens in this age group, and a drop of 9% from 2013. 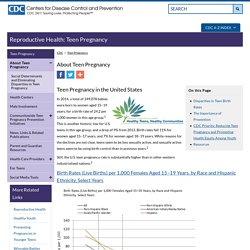 Trends in Teen Pregnancy and Childbearing - The Office of Adolescent Health. Teen Births In 2014, there were 24.2 births for every 1,000 adolescent females ages 15-19, or 249,078 babies born to females in this age group.[1] Nearly eighty-nine percent of these births occurred outside of marriage.[1] The 2014 teen birth rate indicates a decline of nine percent from 2013 when the birth rate was 26.5 per 1,000.[1] The teen birth rate has declined almost continuously over the past 20 years. 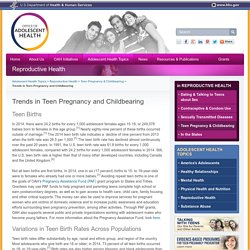 In 1991, the U.S. teen birth rate was 61.8 births for every 1,000 adolescent females, compared with 24.2 births for every 1,000 adolescent females in 2014. Still, the U.S. teen birth rate is higher than that of many other developed countries, including Canada and the United Kingdom.[2] Not all teen births are first births. In 2014, one in six (17 percent) births to 15- to 19-year-olds were to females who already had one or more babies.[1] Avoiding repeat teen births is one of the goals of OAH’s Pregnancy Assistance Fund (PAF) grant program to States and Tribes.