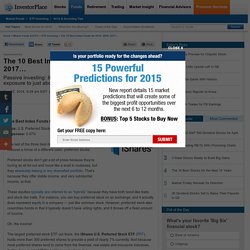 Preferred Stock ETF (PFF) Type: U.S. Preferred StocksExpenses: 0.47% The last of the three best index funds involving U.S. stocks features a horse of a different color: preferred stocks. Preferred stocks don’t get a lot of press because they’re boring as all let-out and move like a snail in molasses, but they absolutely belong in any diversified portfolio. The 50 Best Investing Blogs - Daily Reckoning. The new year is off to an interesting start. 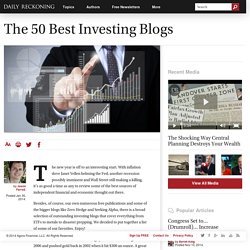 With inflation dove Janet Yellen helming the Fed, another recession possibly imminent and Wall Street still making a killing, it’s as good a time as any to review some of the best sources of independent financial and economic thought out there. Besides, of course, our own numerous free publications and some of the bigger blogs like Zero Hedge and Seeking Alpha, there is a broad selection of outstanding investing blogs that cover everything from ETFs to metals to disaster prepping.

We decided to put together a list of some of our favorites. Enjoy! TripleS Gross Profit vs Shares Owned by Insiders. Investing: Follow the Boomers and buy health care stocks. If you're a Baby Boomer, you may have noticed that your contemporaries aren't as spry as they used to be. 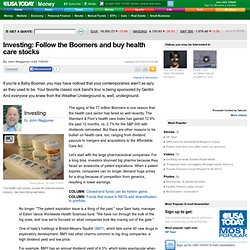 Your favorite classic rock band's tour is being sponsored by Geritol. And everyone you knew from the Weather Underground is, well, underground. The aging of the 77 million Boomers is one reason that the health care sector has fared so well recently. The Standard & Poor's health care index has gained 12.9% the past 12 months, vs. 2.7% for the S&P 500 with dividends reinvested. But there are other reasons to be bullish on health care, too, ranging from dividend payouts to mergers and acquisitions to the Affordable Care Act. Let's start with the large pharmaceutical companies. 10 Best Managed-Healthcare Stocks for 2013 - TheStreet Ratings. Best Investments for 2013 Healthcare Providers Action Alerts PLUS Try it NOW Jim Cramer and Stephanie Link actively manage a real portfolio and reveal their money management tactics while giving advanced notice before every trade. 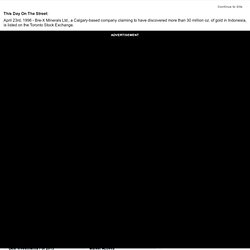 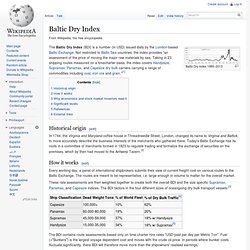 Not restricted to Baltic Sea countries, the index provides "an assessment of the price of moving the major raw materials by sea. Taking in 23 shipping routes measured on a timecharter basis, the index covers Handysize, Supramax, Panamax, and Capesize dry bulk carriers carrying a range of commodities including coal, iron ore and grain. 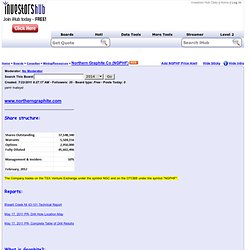 Reports: Bissett Creek NI 43-101 Technical Report May 17, 2011 PR- Drill Hole Location Map May 17, 2011 PR- Complete Table of Drill Results What is Graphite? Raphite and diamonds are the only two naturally formed polymers of carbon. What is graphite used for? Traditional demand for graphite is largely tied to the steel industry where it is used as a liner for ladles and crucibles, as a component in bricks which line furnaces ("refractories"), and as an agent to increase the carbon content of steel.

Industrial demand for graphite has been growing at about 5 per cent per annum for most of this decade due to the ongoing industrialization on China, India and other emerging economies. The market for graphite exceeds one million tonnes per year ("Mtpy") of which 60% is amorphous and 40% flake. How is graphite priced? The China Syndrome Links: Fuel Cell. CEN.TO: Message Board for Coastal Energy Company - InvestorVillage. Africa Oil Corp (AOIFF) Stock Message Board. Exciting new player for the East African Rift. 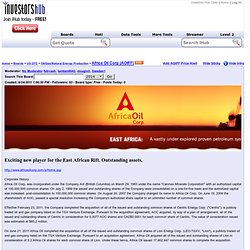