Make Your Own Relationship User Guide. Polyamory Reading List. Last updated 3 May 2017 What is polyamory? 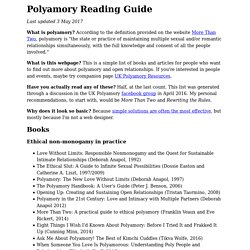 According to the definition provided on the website More Than Two, polyamory is "the state or practice of maintaining multiple sexual and/or romantic relationships simultaneously, with the full knowledge and consent of all the people involved. " What is this webpage? Navigating Non Escalator Relationships – Polysingleish. Aka “So, you’re in a non-escalator relationship- what now?” 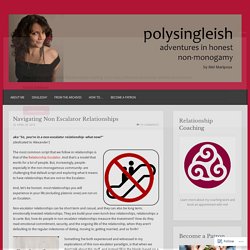 (dedicated to ‘Alexander’) The most common script that we follow in relationships is that of the Relationship Escalator. Ignore This Advice. It’s Ruining Your Relationship. One bit of advice that’s emerged from the last 50 years of the personal development movement is to ask for our needs to be met. 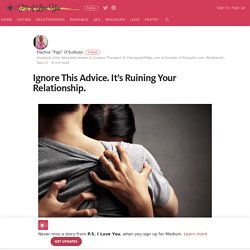 As a therapist, it drives me crazy. Of course, it’s not the asking that’s bad. It’s the how of it that mucks it all up. Marriage should not come with any social benefits or privileges. Miss Amelia Van Buren (circa 1891), portrait by Thomas Eakins. 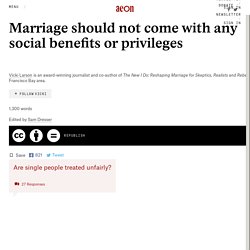 Courtesy of The Phillips Collection, Washington DC/Wikipedia A previously unknown species – single people – has recently been discovered. First, there was Eric Klinenberg’s book Going Solo: The Extraordinary Rise and Surprising Appeal of Living Alone (2012), followed by Kate Bolick’s Spinster: Making a Life of One’s Own (2015) around the time that The Washington Post started a column about the single life called ‘Solo-ish’. Then came Rebecca Traister’s All the Single Ladies: Unmarried Women and the Rise of an Independent Nation (2016). ‘Single people are getting harder and harder to ignore,’ wrote Jesse Singal in New York magazine last year.

Navigating Non Escalator Relationships – Polysingleish. Can polyamorous hierarchies be ethical? Part 2: Influence and control - More Than Two. This is part two of a three-part series inspired by the question Can a hierarchy ever be ethical in polyamory? 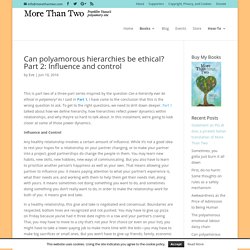 As I said in Part 1, I have come to the conclusion that this is the wrong question to ask. To get to the right questions, we need to drill down deeper. Part 1 talked about how we define hierarchy, how hierarchies reflect power dynamics within relationships, and why they’re so hard to talk about. In this instalment, we’re going to look closer at some of those power dynamics. Can polyamorous hierarchies be ethical? Part 1: The tower and the village - More Than Two. Awhile back, Tikva Wolf, creator of the excellent webcomic Kimchi Cuddles, posted a query on her Facebook page: Can hierarchical relationships ever be ethical? 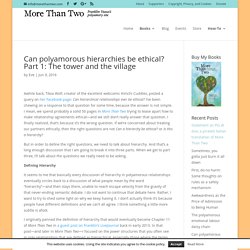 I’ve been chewing on a response to that question for some time, because the answer is not simple. I mean, we spend probably a solid 50 pages in More Than Two trying to tease apart how to make relationship agreements ethical—and we still don’t really answer that question. I finally realized, that’s because it’s the wrong question. The short instructional manifesto for relationship anarchy (Andie Nordgren) This is a new translation/adaptation to English of a relationship anarchy pamphlet by me, Andie Nordgren, published in Swedish as “Relationsanarki i 8 punkter” by Interacting Arts in 2006. 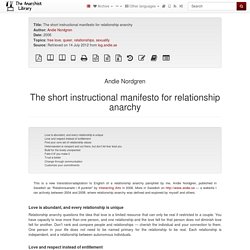 More in Swedish on — a website I ran actively between 2004 and 2008, where relationship anarchy was defined and explored by myself and others. Love is abundant, and every relationship is unique. Professeur Dragon: Manifeste de l'anarchie relationnelle, par Andie Nordgren. Romantic Love is Killing Us: Who Takes Care of Us When We Are Single?