I'm a primary teacher in Spain

Filosofía y cine. The 20 Best Movies About Affairs. Affairs – a word that conjures up a wealth of different emotions, be it the heady excitement of new love or the utter devastation that betrayal brings, as well as the tragedy that sometimes ensues. 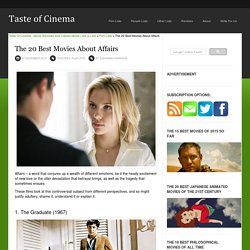 These films look at this controversial subject from different perspectives, and so might justify adultery, shame it, understand it or explain it. 1. The Graduate (1967) Mike Nichols’ comedy-drama based on Charles Webb’s novel, tells the story of an aimless 21-year-old recent college graduate Benjamin Braddock (Dustin Hoffman) who is seduced by his parents’ married friend, the older glamorous Mrs. Robinson (Anne Bancroft). Their strange, awkward relationship begins when Mrs. Benjamin’s life remains as aimless as before, and his days of sunbathing and avoidance blend into each other, only to be punctuated by detached sex with his parents’ friend, who is not interested in him for his conversation.

Mrs. 2. Their spouses work late hours and leave them alone most of the time. 3. 4. 5. 6. Pages: 1 2 3. The 10 Most Overlooked Non-English Language Films of The Last Decade. In 2006 when Kevin Smith (Clerks, Chasing Amy) and Richard Roeper reviewed the movie Half Nelson together, they spoke about how people complain that there is “no more originality in movies”. 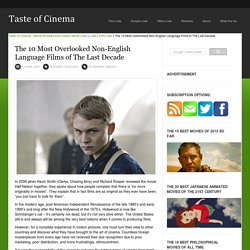 They explain that in fact films are as original as they ever have been, “you just have to look for them”. In the modern age, post American Independent Renaissance of the late 1980’s and early 1990’s and long after the New Hollywood of the 1970’s, Hollywood is now like Schrödinger’s cat – it’s certainly not dead, but it’s not very alive either. The United States still is and always will be among the very best nations when it comes to producing films. However, for a complete experience in motion pictures, one must turn their view to other countries and discover what they have brought to the art of cinema. Countless foreign masterpieces from every age have not received their due recognition due to poor marketing, poor distribution, and more frustratingly, ethnocentrism. 1. 2. 3. 4. 5. Pages: 1 2. 10 Essential Yasujiro Ozu Films You Need To Watch. Yasujiro Ozu is known for his profound examinations of family, generational gaps, and the schism between tradition and modernity. 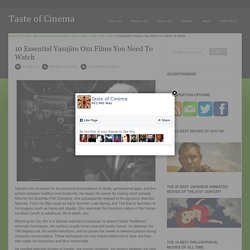 He began his career by making short comedy films for the Shochiku Film Company, and subsequently segued to his signature dramatic features. From his titles (such as Early Summer, Late Spring, and The End of Summer) to his imagery (such as trains and clouds), Ozu examined the transitory nature of the human condition (youth to adulthood, life to death, etc). Watching an Ozu film is a delicate experience because he doesn’t follow “traditional” cinematic techniques. His camera usually hovers low and barely moves, he disobeys the 180-degree rule, he avoids transitions, and he places the viewer in awkward places during character conversations.

These techniques not only helped define Ozu’s style, but they also made his characters and films memorable. 1. Mr. Ozu takes his viewers on a journey through the perspective of his younger characters. 2. The 30 Best Asian Movies of The 21st Century. The progression of Asian cinema has become globally evident since the 90s and is now a widely acknowledged fact, with a plethora of productions screening in festivals around the world and gaining distribution in a constantly growing number of countries. 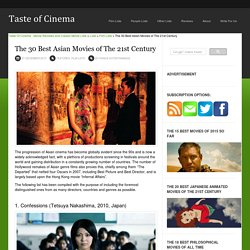 The number of Hollywood remakes of Asian genre films also proves this, chiefly among them “The Departed” that netted four Oscars in 2007, including Best Picture and Best Director, and is largely based upon the Hong Kong movie “Infernal Affairs”. The following list has been compiled with the purpose of including the foremost distinguished ones from as many directors, countries and genres as possible. 1. Confessions (Tetsuya Nakashima, 2010, Japan) Based on the novel by Kanae Minato, “Confessions” deals with the tragic story of Yuko Moriguchi, a junior high school teacher.

Two facts regarding this teacher were common knowledge, up to that point. The 25 Best Movies of 1997. During an evening commute through LA traffic, a friend and I listened to a podcast featuring screenwriter C. 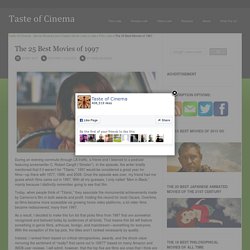 Robert Cargill (“Sinister”). In the episode, the writer briefly mentioned that if it weren’t for “Titanic,” 1997 would be considered a great year for films—up there with 1977, 1999, and 2008. Once the episode was over, my friend had me guess which films came out in 1997. With all my guesses, I only nailed “Men in Black,” mainly because I distinctly remember going to see that film. Today, when people think of “Titanic,” they associate the monumental achievements made by Cameron’s film in both awards and profit, holding the record for most Oscars. As a result, I decided to make this fun list that picks films from 1997 that are somewhat recognized and beloved today by audiences of all kinds.