ACAAI is the premier recognised National Association representing the air cargo industry in India. Founded in 1970 with 16 members, ACAAI currently has a strength of almost 600 members.

Ministry of Civil Aviation, AAI announce Global Aviation Summit 2019. Source….www.itln.in November 29, 2018: In its endeavour to recognise the fast growth of the aviation sector, the Ministry of Civil Aviation and the Airport Authority of India (AAI), in collaboration with the Federation of Indian Chambers of Commerce & Industry (FICCI), has announced the Global Aviation Summit, with an overarching theme of “Flying for all – especially for the next 6 billion”. 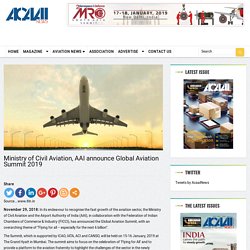 The Summit, which is supported by ICAO, IATA, ACI and CANSO, will be held on 15-16 January, 2019 at The Grand Hyatt in Mumbai. The summit aims to focus on the celebration of ‘Flying for All’ and to provide a platform to the aviation fraternity to highlight the challenges of the sector in the newly developing growth spots. It will provide a platform to the stakeholders to brainstorm over the future of the aviation industry and identify the growth areas. Ministry of Civil Aviation, AAI announce Global Aviation Summit 2019. Missing pieces of the Gypsy Girl Mosaic taken back to its original land from the USA by Turkish Airlines. Source….www.itln.in November 28, 2018: The missing pieces of the Gypsy Girl Mosaic, discovered among the Turkey’s historical heritage Zeugma Mosaics and dating back to the second century B.C., were recently flown back from Chicago to Istanbul, by the Turkish Airlines. 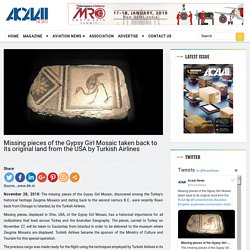 Missing pieces, displayed in Ohio, USA, of the Gypsy Girl Mosaic, has a historical importance for all civilizations that lived across Turkey and the Anatolian Geography. The pieces, carried to Turkey on November 27, will be taken to Gaziantep from Istanbul in order to be delivered to the museum where Zeugma Mosaics are displayed. Turkish Airlines became the sponsor of the Ministry of Culture and Tourism for this special operation. Missing pieces of the Gypsy Girl Mosaic taken back to its original land from the USA by Turkish Airlines. Boeing, Turkish Airlines announce order for three B777F. Source….www.itln.in November 27, 2018: Turkish Airlines has placed an order for three Boeing 777 freighters, as the flag carrier of Turkey continues to register positive financial results and double-digit passenger and cargo growth. 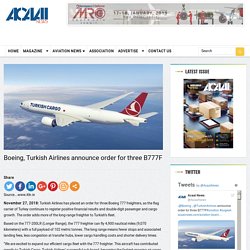 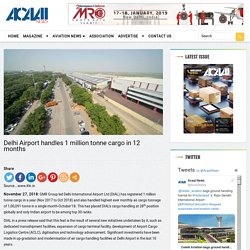 AAI cancels Air Odisha's UDAN license. Source….www.itln.in November 24, 2018: Low-cost carrier Air Odisha will not be permitted to operate from seven airports in the eastern region reportedly. According to a ET report, the Airports Authority of India (AAI) has cancelled the UDAN licence of Air Odisha, owing to its irregular flight services. These airports are namely Jharsuguda, Raipur, Raigarh, Bilaspur, Ambikapur, Jagdalpur and Visakhapatnam. According to the report, Biju Patnaik International Airport director Suresh Chandra Hota said the AAI has sent a letter mentioning the termination clause to the airlines. AAI cancels Air Odisha's UDAN license. AirAsia India ropes in Sanjay Kumar as COO. Source….www.itln.in November 21, 2018: AirAsia India has appointed Sanjay Kumar as its Chief Operating Officer with effect from December 03, 2018. “In the new role, he will be responsible for commercial/ operations of the airline.

He will be instrumental in shaping next phase growth at AirAsia India and will be reporting to the newly appointed CEO & MD, Mr Sunil Bhaskaran,” the company informed in a press release. Kumar, a seasoned professional in the Indian civil aviation industry, has over 25 years of experience in the airline industry across functions like business planning, strategy, network development, distribution and sales, marketing, advertising and public relations. He comes with valuable experience in the low-cost airline business model and scaling-up start-up airlines to market leadership positions. 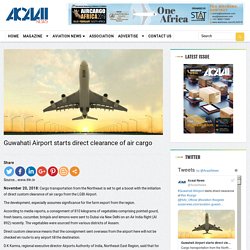 The development, especially assumes significance for the farm export from the region. According to media reports, a consignment of 810 kilograms of vegetables comprising pointed gourd, fresh beans, cucumber, brinjals and lemons were sent to Dubai via New Delhi on an Air India flight (AI 892) recently. The vegetables were sourced from various districts of Assam. Direct custom clearance means that the consignment sent overseas from the airport here will not be checked en route to any airport till the destination. Guwahati Airport starts direct clearance of air cargo. Jet Airways transports record 45 tonnes cargo on Boeing 777-300ER aircraft. Source….www.itln.in November 15, 2018: Jet Airways recently entered global record books for the highest uplift of cargo by an Indian carrier in a single flight. 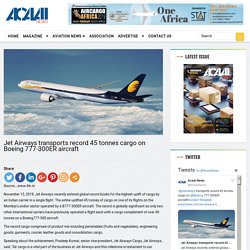 The airline uplifted 45 tonnes of cargo on one of its flights on the Mumbai-London sector operated by a B777-300ER aircraft. The record is globally significant as only two other international carriers have previously operated a flight each with a cargo complement of over 40 tonnes on a Boeing777-300 aircraft. The record cargo comprised of product mix including perishables (fruits and vegetables), engineering goods, garments, courier, leather goods and consolidation cargo. Speaking about the achievement, Pradeep Kumar, senior vice-president, Jet Airways Cargo, Jet Airways, said, “Air cargo is a vital part of the business at Jet Airways and this milestone is testament to our dedicated focus of growing cargo revenues, which has recorded a CAGR of more than 15 percent in the past three years. NDMA conducts training programme for CBRN emergencies. 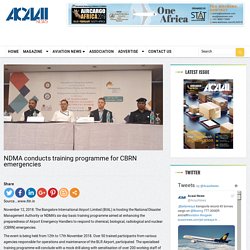 The event is being held from 12th to 17th November 2018. Over 50 trained participants from various agencies responsible for operations and maintenance of the BLR Airport, participated. The specialised training programme will conclude with a mock drill along with sensitisation of over 200 working staff of the Kempegowda International Airport, Bengaluru on the final day. This programme, the 10th in the series, is being conducted in collaboration with Institute of Nuclear Medicine & Allied Sciences (INMAS) and National Disaster Response Force (NDRF).

Government invites bids for Round 3 of UDAN routes. Nov 9, 2018:The government has invited bids from interested operators for the third round of auctions for the UDAN scheme. 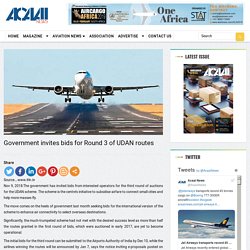 The scheme is the centre’s initiative to subsidise airfare to connect small cities and help more masses fly. The move comes on the heels of government last month seeking bids for the international version of the scheme to enhance air connectivity to select overseas destinations. Significantly, the much-trumpeted scheme had not met with the desired success level as more than half the routes granted in the first round of bids, which were auctioned in early 2017, are yet to become operational.

The initial bids for the third round can be submitted to the Airports Authority of India by Dec 10, while the airlines winning the routes will be announced by Jan 7, says the notice inviting e-proposals posted on the RCS portal. The AAI is the implementing agency of the UDAN scheme that was announced in March 2016. DGCA asks Jet Airways, SpiceJet to take action on B737 Max aircraft. Saudia Cargo inks employee development agreement with Gallup Inc.

Source….www.itln.in October 30, 2018: Saudi Airlines Cargo Company has signed an agreement with Gallup Inc., the global management consulting company, for developing Saudia Cargo employee performance and studying its employee trends and performance levels. The agreement comes in line with the company’s Strategy 2020. Saudia Cargo CEO Omar Talal Hariri said the company attaches great significance to the development of its human capital, which is its greatest asset, and also aims to turn the kingdom into one of the major global logistics platforms in line with Kingdom’s Vision 2030. “The agreement aims to create and implement clear strategy and vision to increase the company’s client base and launch an internal program speeding up the implementation of the transformation strategy and creating conducive environment that enhances culture of sharing. Jet Airways receives its 5th Boeing 737MAX.

Source….www.itln.in October 23, 2018: Jet Airways recently received its fifth Boeing 737 MAX, as part of its fleet modernisation plan. Since the induction of the airline’s maiden 737MAX (registered as VT-JXA) on 28th June, 2018, another four have joined its fleet. The latest MAX – the airline’s fifth, with registration VT-JXE – is part of 11 MAX aircraft that Jet Airways will be inducting this fiscal year. Another model, 220 MAX aircraft are expected to join the airline’s fleet over the course of the next decade, as it expands its footprint. Jet Airways remains the only Indian carrier to operate the advanced single-aisle fuel-efficient aircraft in the Indian skies. Equipped with the CFM LEAP-1B engine, the 737MAX is designed to deliver exceptional performance and reliability with a fuel efficiency of up to 15 percent that translates into a lower seat per mile cost as well as an extended range. Like the 737NG, the 737MAX offers a two-class configuration of two variants. 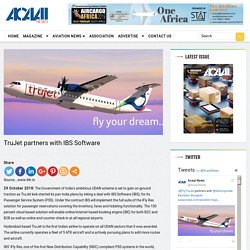 Under the contract IBS will implement the full suite of the iFly Res solution for passenger reservations covering the inventory, fares and ticketing functionality. The 100 percent cloud based solution will enable online/internet based booking engine (IBE) for both B2C and B2B as well as online and counter check-in at all regional airports. Hyderabad based TruJet is the first Indian airline to operate on all UDAN sectors that it was awarded. The airline currently operates a fleet of 5 ATR aircraft and is actively pursuing plans to add more routes and aircraft. “This partnership with TruJet is significant for IBS as it heralds our entry into the Indian PSS market, till now dominated by overseas names. WOW air announces flights to Vancouver from New Delhi. 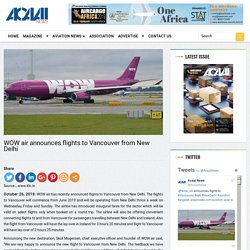 The flights to Vancouver will commence from June 2019 and will be operating from New Delhi thrice a week on Wednesday, Friday and Sunday. The airline has introduced inaugural fares for the sector which will be valid on select flights only when booked on a round trip. The airline will also be offering convenient connecting flights to and from Vancouver for passengers travelling between New Delhi and Iceland. WOW air announces flights to Vancouver from New Delhi. Al-Mubarak roped in as chief ground handling officer for Saudia Cargo. Source….www.itln.in October 26, 2018: Saudi Airlines Cargo Company appointed Abdulrahman Al-Mubarak as chief ground handling officer for the company’s ground handling business unit. The company in a press release says that the appointment comes as part of Saudia Cargo’s recognition of the important role its ground handling business unit has in achieving its Strategy 2020 transformation program. It reflects the company’s ongoing investments into its facilities projects, its cargo terminals and people.