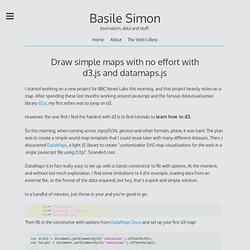 After spending these last months working around Javascript and the famous datavisualisation library d3.js, my first reflex was to jump on d3. However, the one first I find the hardest with d3 is to find tutorials to learn how to d3. So this morning, when coming across topoJSON, geoson and other formats, phew, it was hard. Visualizing Data with AngularJS. The D3 bits but new donut charts will all have the same data... demo. 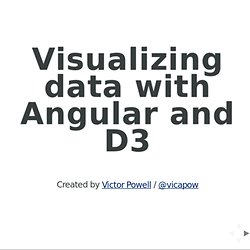 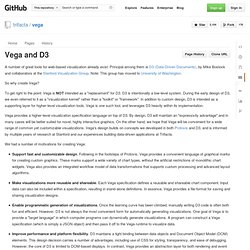 Principal among them is D3 (Data-Driven Documents), by Mike Bostock and collaborators at the Stanford Visualization Group. Note: This group has moved to University of Washington. So why create Vega? Google Groupes. It raises an important question: what is "BigData visualization"? 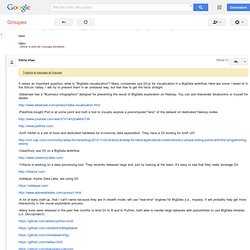 Writing about D3.js - a glob of nerdishness. On Monday I signed a contract to write a book about D3.js for Manning Publications. 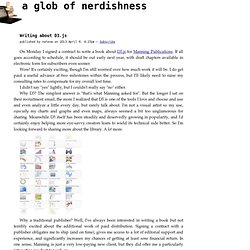 If all goes according to schedule, it should be out early next year, with draft chapters available in electronic form for subscribers even sooner. Wow! It's certainly exciting, though I'm still worried over how much work it will be. I do get paid a useful advance at two milestones within the process, but I'll likely need to raise my consulting rates to compensate for my overall lost time.

README.md Clickme Clickme is an R package that lets you create interactive visualizations in the browser, directly from your R session. 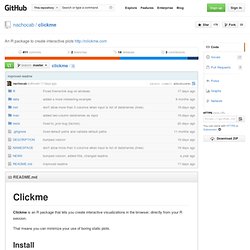 That means you can minimize your use of boring static plots. Install Just run this in R to install Clickme: install.packages("devtools") # you don't need to run this command if you already have the devtools package installed. devtools::install_github("clickme", "nachocab") If there is a new Clickme version a few days later, you can update by simply re-running that last command.

Examples. Vega: A Visualization Grammar. Edit this Fiddle. Canvg - Javascript SVG parser and renderer on Canvas. Visualising a real-time DataSift feed with Node and D3.js. Recently I have been playing with Mike Bostock’s D3.js and continue to be impressed with different examples of how people are visualising data. 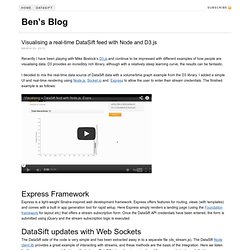 D3 provides an incredibly rich library, although with a relatively steep learning curve, the results can be fantastic. Instant interactive visualization with d3 + ggplot2. It’s often easier to understand a chart than a table. 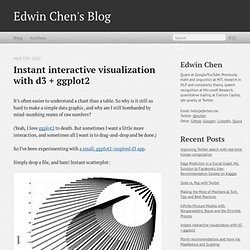 So why is it still so hard to make a simple data graphic, and why am I still bombarded by mind-numbing reams of raw numbers? (Yeah, I love ggplot2 to death. But sometimes I want a little more interaction, and sometimes all I want is to drag-and-drop and be done.) Svg - d3js multipoint line displayed as a closed shape. Edit this Fiddle. Automatically Sizing Text in D3. Mainstem: Rapid Visualization of a d3.js Meetup Group Milestone. D3 Presentation. Click-to-zoom via transform. d3.behavior.zoom: programmatic zooming, disable scroll wheel event? Add flag to zoom behavior to control zooming origin. by marcneuwirth · Pull Request #616 · mbostock/d3.

Programming. I thought this would be a simple task. 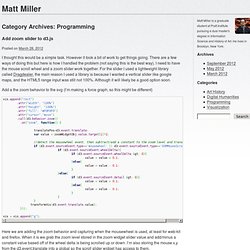 However it took a bit of work to get things going. There are a few ways of doing this but here is how I handled the problem (not saying this is the best way). I need to have the mouse scroll wheel and a zoom slider work together. For the slider I used a lightweight library called Dragdealer, the main reason I used a library is because I wanted a vertical slider like google maps, and the HTML5 range input was still not 100%. Zoom + Pan. Zoom Behavior · mbostock/d3 Wiki. Wiki ▸ API Reference ▸ Behaviors ▸ Zoom Behavior This behavior automatically creates event listeners to handle zooming and panning gestures on a container element. 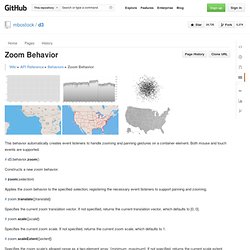 Both mouse and touch events are supported. # d3.behavior.zoom() Constructs a new zoom behavior. # zoom(selection) Applies the zoom behavior to the specified selection, registering the necessary event listeners to support panning and zooming. Msug.vn.ua - /content/d3js/examples/zoom-pan/ D3.js and Octopress - Rob Dodson talks internets. This morning I was hoping to cover some of the basics of using D3.js. Along the way I realized I really wanted people to be able to see the graphs on the blog itself. I could have used JSFiddle, but I didn’t like all that chrome repeated across the page.

So I came up with my own solution with a little bit of hacking :) I’ll have to save the basics for tomorrow since I’ve already spent way too much time just getting this setup. On the tenth day of Xmas, get dirty with data using d3.js. I’d like to start off by asking what seems like quite a simple question: What is the difference between data and information? And taking it a step further, where does knowledge fit into this definition? Not as easy to answer as you might expect, is it! Before we start getting our hands dirty creating some awesome data visualisations, it’s going to be useful to learn the definitions of – and difference between – these three words.

Four Ways to Slice Obama’s 2013 Budget Proposal - Interactive Feature. D3 Tutorial: Axes. Last updated 2012 December 30 Having mastered the use of D3 scales, we now have this scatterplot: Let’s add horizontal and vertical axes, so we can do away with the horrible red numbers cluttering up our chart. Introducing Axes Much like the scale functions, D3’s axes are actually functions whose parameters you define.

Unlike scales, when an axis function is called, it doesn’t return a value, but generates the visual elements of the axis, including lines, labels, and ticks. Note that the axis functions are SVG-specific, as they generate SVG elements. Setting up an Axis. Drought Extends, Crops Wither - Interactive Graphic. Knockout : Home. Election site part 1: Basics with Knockout.js, Bootstrap and d3.js. This article shows how you can use knockout.js, Twitter's Bootstrap and d3.js together to create a javascript application that creates visually pleasing graphics and diagrams to your users. This is complete client side solution that only communicates with REST to the server. Thinking with Joins. Say you’re making a basic scatterplot using D3, and you need to create some SVG circle elements to visualize your data. You may be surprised to discover that D3 has no primitive for creating multiple DOM elements.

Wait, WAT? Sure, there’s the append method, which you can use to create a single element. Eurozone crisis. Transitioning innerRadius of svg.arc - D3.js. d3.js? Babysteps. Bost.ocks.org/mike/d3/workshop/ Speech About Datavisualization Frameworks. D3 for Mere Mortals. By Luke Francl (look@recursion.org), August 2011. Creating Animations and Transitions With D3. Manipulating data like a boss with d3. El Patrón de los Números Primos: Prime Number Patterns. By Jason Davies. For each natural number n, we draw a periodic curve starting from the origin, intersecting the x-axis at n and its multiples. The prime numbers are those that have been intersected by only two curves: the prime number itself and one.

Below the currently highlighted number, we also show its sum of divisors σ(n), and its aliquot sum s(n) = σ(n) - n, which indicate whether the number is prime, deficient, perfect or abundant. Based on Sobre el patrón de los números primos by Omar E. D3 Tutorials. <div id="js_warning"><strong>JavaScript is turned off, so this page won&rsquo;t be very interactive. </strong> Switch JavaScript back on in your web browser for the full experience.