Tokyo Travel: Suggested Itineraries and Side Trips. At least two full days are required to experience the modern, urban city of Tokyo; however, at least a week would be needed to get to know Japan's capital city more intimately. 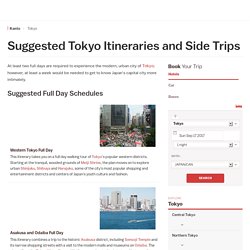 Suggested Full Day Schedules This itinerary takes you on a full day walking tour of Tokyo's popular western districts. Starting at the tranquil, wooded grounds of Meiji Shrine, the plan moves on to explore urban Shinjuku, Shibuya and Harajuku, some of the city's most popular shopping and entertainment districts and centers of Japan's youth culture and fashion. This itinerary combines a trip to the historic Asakusa district, including Sensoji Temple and its narrow shopping streets with a visit to the modern malls and museums on Odaiba. The plan utilizes the Tokyo Water Bus and Yurikamome elevated train to travel between the two districts and stops off at Hama Rikyu garden along the way. 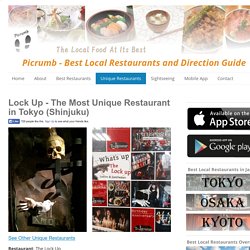 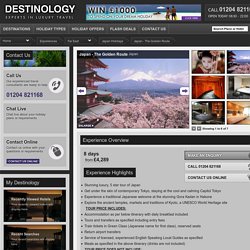 Hakone is a natural nature wonderland and is famous for its hot springs, outdoor pursuits and the view of the nearby Mount Fuji. It is part of the Fuji-Hakone-Izu National Park and is less than 100km from Tokyo, thereby providing a popular weekend destination for city residents keen to escape the frenzy of the capital. Beautiful Hakone has about everything a traveller could wish for. Besides the towering mountains, lakes and views of Mount Fuji, it is also blessed with interesting historical sites. Ride the world’s second longest cable car up Mt Owakudani, passing over sulfurous fumes, hot springs and hot rivers in this volcanic area, where you can eat an egg hard boiled in the sulfuric hot springs which make Hakone famous.

Cheapo hack #1 - Cheapo Beginner’s Guide to Tokyo. We also have a bunch of Cheap and Free Events listed, and we do this rather convenient wrap called the Cheapo Weekend, which makes planning your Saturdays and Sundays super easy and economical. 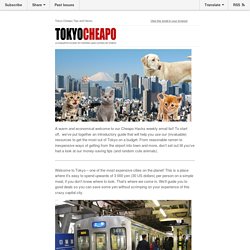 You can sign up for that here. Take a look at our bi-monthly Top 5 Events posts too, then give your eyes a break and tune in to our monthly podcasts. We’re always adding heaps of other (hopefully) awesome stuff to the site, like 1-Day Itineraries and {*style:<a href=' Eating Guides{*style:</a>*} (we might be cheap, but we don’t live on cup ramen), so tell us what you’d like to see, and we might just feature it. Leave us a comment or hit us up in the social media sphere. Our guide to the ten most unmissable travel experiences Tokyo has to offer. Cheapo hack #2 - Cheapo Basics – Do Everything Off Peak. Japan is a country obsessed with doing everything in unison and in the same way. 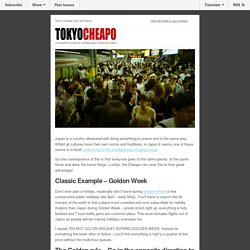 Whilst all cultures have their own norms and traditions, in Japan it seems one of these norms is in itself conforming to the standard way of doing things. So one consequence of this is that everyone goes to the same places, at the same times and does the same things. Luckily, the Cheapo can uses this to their great advantage! Classic Example – Golden Week Don’t ever plan a holiday, especially don’t travel during Golden Week (a few consecutive public holidays late April – early May). I repeat, DO NOT GO ON HOLIDAY DURING GOLDEN WEEK.

The Golden rule – Go in the opposite direction to everyone else. 3 Days in Tokyo: Suggested Itineraries - Tokyo. Tokyo. 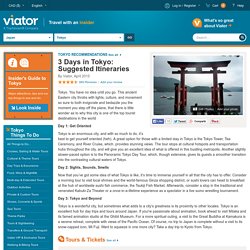 You have no idea until you go. This ancient Eastern city throbs with lights, culture, and movement so sure to both invigorate and bedazzle you the moment you step off the plane, that there is little wonder as to why this city is one of the top tourist destinations in the world. Tokyo Attractions. Things To Do In Tokyo. Things to do May 26, 2015Events, Lifestyle Summer’s Here – Firefly Nights Around TokyoJune is already summertime in Tokyo, but it’s still a bit too early for fireworks and festivals with people in yukata. 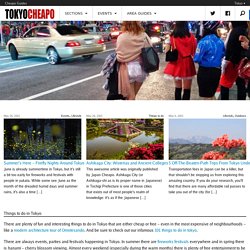 While some see June as the month of the dreaded humid days and summer rains, it’s also a time […]May 26, 2015Things to do Ashikaga City: Wisterias and Ancient CollegesThis awesome article was originally published by Japan Cheapo. Ashikaga City (or Ashikaga-shi as is its proper name in Japanese) in Tochigi Prefecture is one of those cities that exists out of most people’s realm of knowledge: it’s as if the Japanese […]May 6, 2015Lifestyle, Outdoors 5 Off-The-Beaten-Path Trips From Tokyo Under 5,000 yenTransportation fees in Japan can be a killer, but that shouldn’t be stopping us from exploring this amazing country. Top 5 unusual things to do in Tokyo. Top 5 unusual things to do in Tokyo The Travel Tart Every good holiday needs some quirky tales to tell on your return home and Japan’s capital delivers more than its fair share. 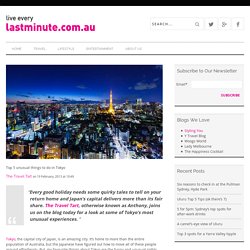 Climbing Fuji: A Guide to Japan's Greatest Mountain. Gazing down on Japan from atop its symbolic mountain is high on the to-do list for most visitors and residents alike, but at 3,766 m it’s not the effortless stroll that many elderly Japanese people make it seem. 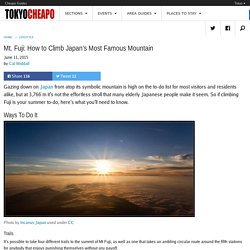 So if climbing Fuji is your summer to-do, here’s what you’ll need to know. Ways To Do It Trails It’s possible to take four different trails to the summit of Mt Fuji, as well as one that takes an ambling circular route around the fifth stations for anybody that enjoys punishing themselves without any payoff. We recommend the Yoshida Trail, which is the most popular for good reason. Sleep. Cheapo hack #3 - Going to the Sumo for Cheap. Along with geisha, Mount Fuji, bullet trains and tentacle porn, nothing epitomises the outside image of Japan quite like the ancient sport of Sumo. 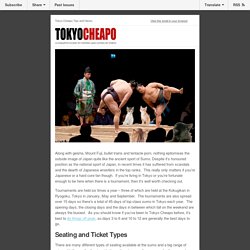 Despite it’s honoured position as the national sport of Japan, in recent times it has suffered from scandals and the dearth of Japanese wrestlers in the top ranks. This really only matters if you’re Japanese or a hard core fan though. Tokyo With Kids – Where To Go and What To Do. Updated: February, 2015 Essentials The 24 Best Things To Do in Tokyo with Kids Tokyo is a fantastic city to take kids and it’s far and away the most interesting destination in Japan for families.

It has an incredible array of attractions and kid-friendly destinations (beyond Disneyland) that could easily keep a family very busy for a week or more. 10 of the best outdoor activities in and around Tokyo. Mount Takao The Japanese have been making the pilgrimage to Mount Takao for more than 1,200 years; now they share the sacred mountain's slopes with tourists searching for "old Japan" – all within an hour of Shinjuku station. On a clear day, the 599m summit offers views of Tokyo and Mount Fuji, and the less energetic can take a cable car or chairlift halfway up the six hiking trails. Takao is still considered an important religious site, so don't be surprised to find yourself sharing a trail with ascetic Buddhists on their way to pray at Yakuo-in temple or cleanse themselves beneath the freezing waterfalls of Biwa-daki or Hebi-daki. Walking Tokyo: from Mount Takao to the megacity. Nobody rambles across Tokyo. It is the ultimate megacity: a vast web of suburbs – of small cities, really – radiating out from a hub of skyscrapers.

More than 30 million people live within 30 miles of its centre. A city this big and complicated can only function because of its extraordinary mass transit system, which shuttles millions of workers to and from its suburbs each day. But I wanted to experience the city at walking speed. Somewhere under the concrete, the tower blocks, the monorails and the overpasses, lie other versions of Japan: the culmination of thousands of years of island history, presided over by an imperial family that still traces its descent in an unbroken lineage from the sun god, Amaterasu.