Busan Awesome - things to do in Busan. Of the many benefits of courting a Korean lady, one of the best has to be their ability to discover interesting and off-the-severely-beaten-path type of places Busan has hidden away. 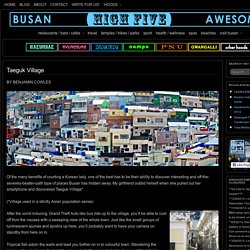 My girlfriend outdid herself when she pulled out her smartphone and discovered Taeguk Village*. (*Village used in a strictly Asian population sense) After the vomit inducing, Grand Theft Auto like bus ride up to the village, you’ll be able to cool off from the nausea with a sweeping view of the whole town. Just like the small groups of luminescent ajumas and ajoshis up here, you’ll probably want to have your camera on standby from here on in. Tropical fish adorn the walls and lead you further on in to colourful town. There’s an official path with arrows pointing visitors where to go. Busan Archives - 1 Adventure Traveler. Haps Magazine Issue 26 by busan haps. Elysee Hotel Busan Busan, South Korea: Agoda.com. Elysee Hotel, Busan, South Korea - Booking.com. Booking.com guest review guidelines Only a customer who has booked through Booking.com and stayed at the property in question can write a review. 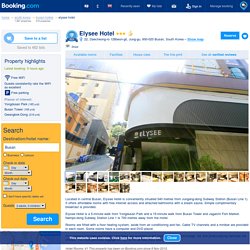 This lets us know that our reviews come from real guests, like you. Who better to tell others about the free breakfast, friendly staff, or quiet room than someone who’s stayed at the property before? We want you to share your story, both the good and the bad. All we ask is that you follow a few simple guidelines. Tips for writing a great review Give us details. Be candid. Be relevant. We will sometimes remove reviews if they include the following: Objectionable material. Private information. Sensitive information. Irrelevant topics. In some rare cases, neither the written review nor the review score can be displayed.

Shopping in Busan. 0Google + There is no shortage of shopping to be done in Busan. 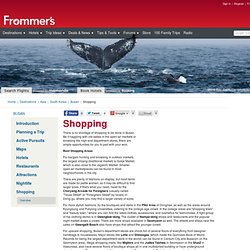 Be it haggling with old ladies in the open-air markets or browsing the high-end department stores, there are ample opportunities for you to part with your won. Best Shopping Areas For bargain hunting and browsing in outdoor markets, the largest shijang (traditional market) is Gukje Market, which is also close to the Jagalchi Market. Smaller open-air marketplaces can be found in most neighborhoods in the city.

There are plenty of fashions on display, but most items are made for petite women, so it may be difficult to find larger sizes. For more stylish fashions, try the boutiques and stalls in the PNU Area of Dongnae, as well as the areas around Kyungsung and Pukyong universities, catering to the college-age crowd. For upscale shopping, Busan's department stores are chock-full of several floors of everything from designer handbags to housewares. Book ferry to Japan. Busan Tours. Cruise Tour Enjoy great views of the beautiful Bysan coast BUSAN City Tour Bus. 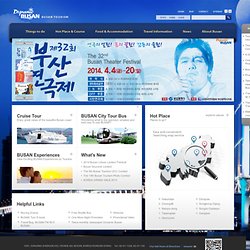 Water Park at Spo1 Park Open for the Summer - Busan Haps. Looking to cool off this summer? 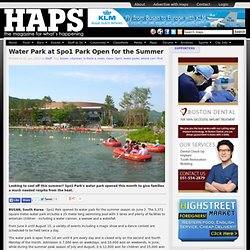 Spo1 Park's water park opened this month to give families a much needed respite from the heat. BUSAN, South Korea - Spo1 Park opened its water park for the summer season on June 2. Busan General Info. Busan is the second largest city within Korea and the number one trading port. 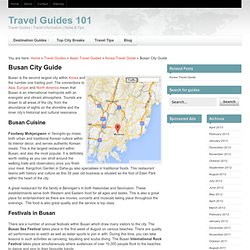 The connections to Asia, Europe and North America mean that Busan is an international metropolis with an energetic and vibrant atmosphere. Haedong Yonggungsa Temple - 해동 용궁사 (Busan, Haeundae) Busan’s 10 Best: Beyond the Festivals and Beaches. The Gwangali fireworks festival as seen from the peak of Mt. 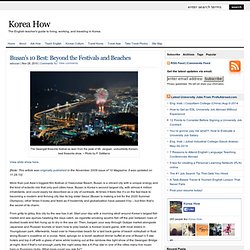 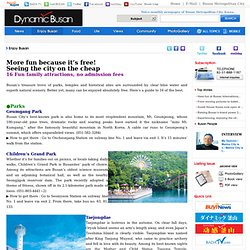 Seeing the city on the cheap 16 Fun family attractions, no admission fees Busan’s treasure trove of parks, temples and historical sites are surrounded by clear blue water and superb natural scenery. Better yet, many can be enjoyed absolutely free. Here’s a guide to 16 of the best. Interactive comprehensive list of activities. GREAT More academic interactive resource for all sorts. Busan (부산, Officially Busan Metropolitan City), before 2000 latinized Pusan[3] (Korean pronunciation: [pusan]) is South Korea's second largest metropolis after Seoul, with a population of approximately 3.6 million.[1] The Metropolitan area (includes adjacent cities of Gimhae and Yangsan) population is 4,399,515 as of 2010.[4] It has Korea's largest beach and Korea's longest river. 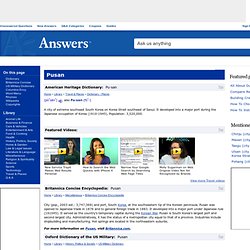 It is the largest port city in South Korea and the world's fifth busiest seaports by cargo tonnage.[5] The city is located on the southeastern-most tip of the Korean peninsula. The most densely built up areas of the city are situated in a number of narrow valleys between the Nakdong River and Suyeong River, with mountains separating some of the districts. Administratively, it is designated as a Metropolitan City.

GREAT Casual Interactive resource for all sorts. How to spend a weekend in Busan. Busan is a wonderful city and one of my favorite cities in Korea. 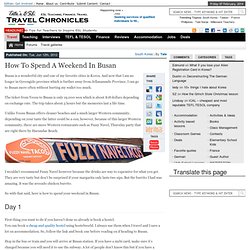 And now that I am no longer in Gyeongido province which is further away from Jellananmdo Province, I can go to Busan more often without hurting my wallet too much. The ticket from Yeosu to Busan is only 19,000 won which is about $18 dollars depending on exchange rate. The trip takes about 3 hours but the memories last a life time. Unlike Yeosu Busan offers cleaner beaches and a much larger Western community, depending on your taste the latter could be a con; however, because of this larger Western community, there are more Western restaurants such as Fuzzy Navel, Thursday party that are right there by Haeundae Beach.

I wouldn’t recommend Fuzzy Navel however because the drinks are way to expensive for what you get. So with that said, here is how to spend your weekend in Busan. 5 Ways to See Busan in a Weekend. Travel Busan: What to do and see in Busan in 48 hours It was 11:00 PM Friday evening. Fun-filled summer beaches. Fun-filled summer beaches During summer, when the blue sea and white waves gesture to visit, Busan seas are one of the best vacationing areas in Korea, full of things to see, eat and enjoy. The Haeundae, Songjeong, Gwangalli and Songdo beaches have music, dance, art and marine sports that are attracting visitors from Korea and overseas to the beaches. Let’s take a look at the major programs of each beach.

Multimedia show, salsa dance festival, walk along the Moontan Road ■ Haeundae Beach. Busan Awesome - things to do in Busan. To Westerners, Yongho-Dong’s Igidae Park is one of Busan’s lesser-known scenic trails. It’s basically the city’s “other coastline”—look straight and you can see Haeundae beach; look left and you face the Gwangali bridge. It’s also teeming with native Koreans out for a two-and-a-half-hour afternoon stroll, or setting up fishing posts along the rocks by the water, so don’t expect a solitary jaunt. Its lack of popularity among non-native citizens might be owed to the fact that it’s a little tricky to find (we took a taxi), or that the hike itself is really more of a rugged walk. Igidae is a testament to the amount of money and effort Korean governments will pour into natural infrastructure: there are loads of clean stairs (they look freshly painted, even if they actually aren’t), naturally-integrated benches and frightening-to-some suspension bridges overhanging small cliffs.

Basically, you’re surrounded by greenery the whole time, but you never feel like you’ve left the city. A refreshing tour of Busan - Igidae Coastal Walk – Day 9 in South Korea. After the unfortunate turn of events yesterday, we woke up with a fresh start beginning with a very nice Korean meal from our host. I was very thankful that so far, we have stayed with very friendly and hospitable hosts and our host in Busan was especially nice as he has agreed to tour us to different places in Busan. The plan for the day was to go to Igidae Coast, UN Memorial Cemetery, Busan Cinema Center, Shinsegae and finally, go to Haeundae where the Busan Fireworks Festival will take place. Starface Dalmaji Hill » BUSAN! HIGH FIVE! AWESOME! Article by Melissa Tait StarFace Dalmaji hill is a little bit of London in Busan. It’s a WaegukBar, menu and drinks in English and Korean, and comfy lounge chairs scattered around the room. At some point during your first beer youwill probably meet Charles, the English co-manager of the bar.

Helikes to have a chat with everyone that comes in and does his utmost to keep you comfortable and happy. Charles’ English influence comes through on the menu, which featuresfish and chips as well as the UK’s national dish, Curry. Up On the Hill: Starface Going Strong for 18 Years - Busan Haps. With live music on weekends, Busan's longest running trivia on Sunday nights, great food and a very friendly atmosphere, Starface has stood the test of time. The menu features Indian, British and Mexican cuisine and an abundance of cozy spots to settle in and enjoy a good evening up on the hill.

BUSAN, South Korea -- Walking through the front door of Starface on Dalmaji Hill in Haeundae, a veritable pioneering pub founded nearly two decades ago, my first concern was that somehow I had the wrong address and I had stumbled into the well-appointed parlor of a private residence. This initial unease was quickly allayed by the conviviality of the intermingled, multinational crowd interspersed around the spacious, yet cozy-feeling pub. KAYAK - Press Hotel Map - Busan Hotels - Search KAYAK for Great Rates and Hotel Deals.